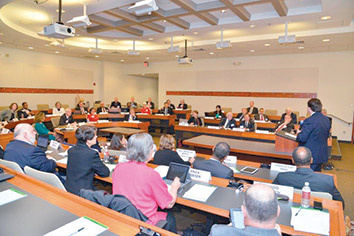 In trying to chart the best course for law schools, it is important to realize everyone has an opinion.

The American Bar Association’s Task Force for the Future of Legal Education, led by retired Indiana Chief Justice Randall Shepard, learned just how many views and opinions there are during a recent symposium in Indianapolis.

A collection of academics, practicing attorneys, bar association leaders and judges gathered April 24 at the Indiana University Robert H. McKinney School of Law to give their input and advice on how law schools should address the future needs of the legal profession.

The task force is charged with examining legal education in the United States and making recommendations that will help tackle the problems of student debt and diminished employment prospects, and changes in how law is practiced.

Shepard noted the committee has accelerated its schedule and will be offering a preliminary report in late summer or early fall.

Speaking after the first session, Shepard said problems of rising debt and limited job prospects are a threat not just to schools but also to how the legal profession helps society.

“At the end of the day, this is not just the ABA’s concern; it is the concern of judges, of firms, of universities. We’ll do as much as we think is practical to do in order to help address the various elements of the current crisis,” he said.

The symposium at I.U. McKinney School of Law is anticipated to be the only one of its kind convened by the task force. In the morning session, moderator Jay Conison, former Valparaiso University School of Law dean, asked the participants for advice on what the task force should focus on and how the final report should look.

Many noted the pressures on law schools are coming from upheaval in the legal profession itself as well as the marketplace. As such, they advocated that the task force avoid one-size-fits-all regulations on law schools. Instead, the institutions should be given the freedom to craft their own solutions to the problems.

Others pointed to the reality of the market where many individuals have to represent themselves in court. Contrary to conventional wisdom about the glut of lawyers, members of the poor and middle classes are unable to afford the services of many attorneys.

William Henderson, director of the Center on the Global Legal Profession at the Indiana University Maurer School of Law, said legal education has to consider the broad changes brought by automation and globalization before developing an economic solution.

“I think just thinking about the economic solutions of legal education is going to get us into trouble because the political dimensions of what’s coming, I think when we step back and look, are going to be just staggering, and we should be focusing on that,” he said.

Shepard said the conversations about requirements being too tight on law schools and the way that legal services are adjusting to the market were among his primary takeaways from the opening session.

Also, while many in the room had plenty of criticism for law schools, he drew attention to the contribution those institutions have made.

“… the existing set of schools and those existing set of requirements do have a lot to say for them,” he said. “They have produced a practicing bar and a set of courts that is envied in much of the world, and therefore (we) have to be very thoughtful about the potential to do damage to a system which overall has proven pretty successful.”•