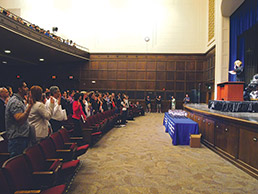 The Hon. Jane Magnus-Stinson of the United States District Court for the Southern District of Indiana administers the Oath of Citizenship to 82 individuals from 36 different countries at the Shortridge Naturalization Ceremony.

Students at Shortridge Magnet High School for Law & Public Policy experienced the final step to becoming an American citizen first-hand Thursday, May 2 as the school hosted a naturalization ceremony for more than 80 individuals seeking citizenship. The Honorable Jane Magnus-Stinson of the United States District Court for the Southern District of Indiana presided over the ceremony, which was the result of a collaboration between the school, the court and the IndyBar Public Outreach Committee. 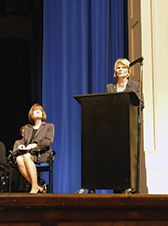 IndyBar President Kerry Hyatt Blomquist congratulates the new citizens on behalf of the bar. The IndyBar and Indianapolis Bar Foundation present new citizens with copies of the United States Constitution at each Naturalization Ceremony in the Southern District of Indiana.

The Shortridge ceremony offered the opportunity not only for the entire student body of the school to observe along with the friends and families of the new citizens, but for some students to also play an active role in the ceremony, with the Presentation of the Colors by the Crispus Attucks Medical Magnet Color Guard and musical performances by the Shortridge Chamber Ensemble and the Shortridge Wind Ensemble. Students also presented table top American flags to the new citizens and led them in reciting the Pledge of Allegiance.

United States Senator Dan Coats was in attendance at the Shortridge High School Naturalization Ceremony and offered the new citizens his personal welcome to citizenship.

Naturalization Ceremonies, typically held weekly in Indianapolis in the Birch Bayh Federal Building and United States Courthouse, feature the recitation of the United States Oath of Citizenship and provide newly naturalized citizens with a welcome to the United States, a brief overview of the justice system and the importance of citizenship, and greetings and congratulations from city and state officials and local organizations.•