Sharon Barner, vice president and general counsel of Cummins Inc., received the American Inns of Court Professionalism Award for the 7th Circuit. This award is given to a lawyer or judge whose life and practice exemplifies personal integrity coupled with a dedication to the highest standards of the legal profession and rule of law. 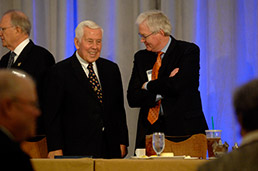 Former Indiana Sen. Richard Lugar, left, and 7th Circuit Court of Appeals Judge John Tinder converse during the 7th Circuit Bar and Judicial Conference on May 6 in Indianapolis. Tinder was in high school the last time he had the opportunity to introduce Lugar, who at that time was working on becoming mayor of Indianapolis. (IL Photo/ Perry Reichanadter)

Judge James Holderman, chief judge of the U.S. District Court for the Northern District of Illinois, presented Barner with the award.

Circuit Judge John Tinder had the privilege of introducing former Sen. Richard Lugar. Tinder told the 7th Circuit Bar conference that Lugar was known as “a champion of the rule of law throughout the world and a great friend to the federal judiciary.”

But before he became all that, Lugar was a guest speaker at Brebeuf Jesuit Preparatory School in Indianapolis, and Tinder recalled the occasion when he’d last introduced Lugar, presenting him to his classmates back in 1967. Upon taking the lectern, Lugar joked that Tinder had made more of himself than Lugar imagined he might.

Lugar recalled that during his successful campaign for mayor of Indianapolis in the years that followed, Tinder was helpful, even posting numerous “Lugar for mayor” signs on the campus of Indiana University in Bloomington. Lugar mused that the number of Bloomington voters in the Indianapolis mayoral election wasn’t known, but that the effort was surely helpful.

New filings in District courts of the 7th Circuit edged up last year, increasing 1.7 percent across the seven districts in Indiana, Illinois and Wisconsin. But the caseloads varied widely in the different jurisdictions. In the Northern Indiana District, for instance, cases rose 30 percent, while they declined 33 percent in the Southern Illinois District

Chief Judge Frank Easterbrook provided the analysis during his State of the Circuit address. While cases overall are up, bankruptcy filings are down an average of 6.5 percent in District courts across the 7th Circuit, Easterbrook said.

Sharing an anecdote from early in his 36-year Senate career, Lugar recalled a federal judicial nominee was confirmed after a two-question Judiciary Committee hearing.

Lugar remembered the second question and final inquiry of the nominee from the committee chairman at the time: “Dick Lugar said you would be a good judge. Will you be a good judge?”

Indianapolis will next host the 7th Circuit Bar and Judicial Conference in 2017. The event will be in Chicago next year, Milwaukee in 2015, and Chicago in 2016. Organizers said an estimated 650 people attended the Indianapolis conference.•