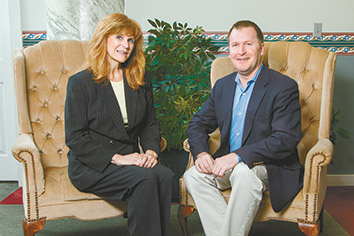 When the pro se litigants approached the bench in the Vanderburgh County family law court, they often asked the judge for legal advice. They did not have the money to hire a lawyer so when they had legal questions, the litigants naturally turned to the judge, the only resource they had available.

The Volunteer Lawyer Program of Southwestern Indiana, serving the counties clustered in the lower corner of the state, decided to offer some help. That decision came during the worst of the economic recession when not only were many households struggling, but the funding for pro bono programs was withering.

Though times were tough – but because times were tough – the Volunteer Lawyer Program moved forward with the new initiative. Led by then co-chair of the program, Vanderburgh Superior Judge Wayne Trockman, the VLP developed a family law clinic to offer assistance to these pro se litigants.

Now, two afternoons a month, local attorneys answer questions, explain the legal process, give advice and help fill out forms for the individuals and families going into family court.

Trockman called the clinic a success. The feedback has been positive, and many individuals have received the help they needed.

He attributed the reason for the clinic’s accomplishment to the same reason that underlies the achievements of the pro bono program overall – the culture of the legal community in southwestern Indiana.

“The volunteers are very diverse. They don’t come from one group. They come from all segments of the bar,” Trockman said. “The attorneys in our district really care and, at least for me, it shows in the abundance of participation.”

Sitting recently at the conference table in the small office from which the VLP is run, Beverly Corn, plan administrator, and Scott Wylie, co-administrator/program director, also linked the program’s success to the culture of the region’s attorneys.

A reflection of the legal community’s commitment comes during Evansville’s Law Day celebration. The day begins with the local attorneys reciting the Indiana Oath of Attorneys. The last clause of that oath speaks to not forsaking the poor and to the attorneys’ obligation to not turn away people from justice.

That sentiment, say Wylie and Corn, is deeply engrained among the attorneys in the district.

“I sleep at night because I know that I’m working with attorneys and individuals who have a belief that we do what we can to help those that we can,” Corn said. “We do what we do because we are who we are.”

Doing what they could became more difficult during the economic recession. Also known as Pro Bono District K, covering Evansville and the surrounding counties, the program has faced budget cuts like other districts across the state. And on top of the belt tightening, the district grew bigger.

In 2008, the pro bono programs were hitting their stride, said Wylie, who recently became a member of the Pro Bono Commission. Every district had a program, and all programs were fully incorporated, doing high-quality work.

Then the economy stumbled and interest rates dropped. With the pro bono districts subsisting on funds from the Interest on Lawyer Trust Account program, the market upheaval ushered in deep cutbacks and painful choices.

The Volunteer Lawyer Program of Southwestern Indiana was allotted $156,000 in 2007-2008, according to Corn. For the last three years, the program has received $86,330. And when the Pro Bono Commission consolidated the number of districts from 14 to 12, the VLP picked up Sullivan and Vigo counties.

Wylie applauded the work of the commission in steering the districts through the economic recession. The consolidation helped redistribute resources to keep the staff attorneys who were already in place.

In turn, when the interest rates rise and the money comes back, he said, the institutional knowledge will still be available so the programs will be viable and not have to be rebuilt from scratch.

When the district expanded, Corn traveled the 125 miles to Terre Haute to introduce herself to the local bar association. In the audience that day was Derek Conner, a young attorney at Wright Shagley & Lowery P.C. in Terre Haute.

After hearing Corn speak, he volunteered his help.

Conner currently serves as the Vigo County representatives for the Volunteer Lawyer Program. The cases land in his inbox, and then he sends out a mass email to 100 or more attorneys in the area, looking for someone to offer their services. Usually, the responses come quickly, and the cases get picked up.

“I feel like we’ve got a base of attorneys who are willing to give people some of their time,” Conner said.

In fact, he said the pro bono effort in his community could handle more cases. Knowing what his hometown has been through economically, Conner worries that residents are going without legal services because they do not realize help is available for free.

Those who come for pro bono legal assistance in Terre Haute are no different than people in other parts of the district. Many have low-paying jobs and after they cover food and rent, little is left over. A landlord-tenant dispute, a divorce or custody matter can send them to court without a lawyer.

“People are poor for a reason,” Wylie said. “No one wants to be poor. They’re poor because they didn’t get the love to have a wonderful education or they weren’t blessed with parents who were able to steward them through education or provide them an inheritance or whatever helps all the rest of us get jobs. They get outcompeted at McDonald’s.”

At the Volunteer Lawyer Program, the administrators dealt with the cuts by distilling its work down to core functions such as placement of cases, and increased alternative services like clinics and self-help materials.

This is done, Wylie said, so they can funnel the tough cases, the people who truly need legal representation, to attorneys like Jean Blanton of Ziemer Stayman Weitzel & Shoulders LLP.

Since she stared practicing about nine years ago, Blanton has always worked on at least one active case from the VLP. Focusing on family law, she has handled a custody battle that included a day-and-a-half trial, and she has taken two cases on appeal.

Family law cases can be emotional and stressful, she acknowledged, but when she goes to the county courts building, she sees the individuals who have to maneuver through the system by themselves because they cannot afford an attorney.

“We can’t help everyone,” she said, “but everything we do makes a difference.”

Sometimes that difference comes in the simple legal matters.

The VLP organized a “wills clinic” for the clients at the community mental health center in Vanderburgh County. These individuals live on a monthly income of $674 from Social Security. This is certainly not a lot of money but when they die without a will, their survivors cannot access their last check.

At first, the clients entering the clinic area were leery and extremely shy, Corn remembered. She had arranged the clinic space to mirror an actual law office, with a receptionist to greet the clients and introduce them to their attorney.

Walking out the door at the end of the process, the clients had their heads high, smiling and were clutching their wills.

“There was not a dry eye in the place because of the work,” Corn said. “This is why we do what we do.”•