Scott Wylie was turned down for the first job he applied for in legal services.

It was 1988 and Wylie, then a student at the University of Illinois College of Law, was following his long-held desire to do public service work. Fortunately, the disappointment of not getting the job did not dissuade him. 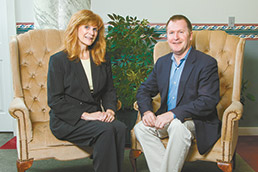 He went forward to build a career in California before settling in Evansville to join the Volunteer Lawyer Program of Southwestern Indiana. His passion and idealism coupled with his efforts to provide legal services to those at the margins of society recently earned him praise from his colleagues in pro bono services across the country.

“You can’t do this work unless you want to change the world,” Wylie said.

Even while he concedes the problem of poverty will not be solved in his lifetime, he believes the work he and his Indiana co-workers are doing today may help provide a solution at some later time.

“It is hard work, and it’s not that it isn’t depressing at times,” Wylie said. However, he noted the satisfaction of providing something of value that the person otherwise wouldn’t be able to get is very rewarding.

The day after graduation from law school in 1989, Wylie packed his Mercury and drove to Los Angeles. He spent 17 years in southern California where he practiced in a private firm working mostly for nonprofits. He also taught at a law school and participated in pro bono initiatives.

At present, Wylie is the executive director of the Vanderburgh Community Foundation, helps administer the Volunteer Lawyer Program and serves on the Indiana Pro Bono Commission.

He is quick to deflect the credit for the Neiman Award from himself to the pro bono program as a whole, noting Evansville deserves to get that recognition as much as any major city.

“Indiana is extremely lucky to have such a dedicated public servant like Scott Wylie,” Dunlap said. “Scott’s national award for Pro Bono Professional of the Year is richly deserved and is a testament to his longstanding leadership in promoting access to justice in Indiana and nationally. I can think of no better representative to demonstrate the spirit of volunteerism and public service that Hoosier lawyers practice on a daily basis.”

Wylie was surprised to receive the award. He previously had helped select recipients but had no idea he had been tapped for 2013.

At the luncheon during the Equal Justice Conference, the keynote speaker was Chief Justice of the Supreme Court of Missouri Richard Teitelman.

Ironically, before Teitelman ascended to the bench, he served for nearly 20 years as the executive director and general counsel for Legal Services in Eastern Missouri. He was the man who turned Wylie down in 1988.

“It was fun to speak with him afterwards and tell him I’d done OK, even though he had chosen not to hire me,” Wylie said.•