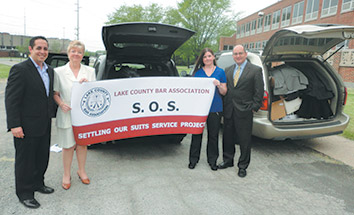 Thirty new members were inducted as fellows of the Indiana Bar Foundation during the fellows’ annual meeting and dinner May 31 in Chicago.

The 2013 class includes 14 attorneys from central Indiana, nine from northwest Indiana, four from southern Indiana and three from Fort Wayne. Two of the fellows are also members of the judiciary.

Fellows are nominated by another fellow and are then approved by the foundation. Fewer than 1,000 lawyers in Indiana have been accepted.

Chuck Dunlap, a master fellow and executive director of the Indiana Bar Foundation, praised the attorneys for having demonstrated excellent legal professionalism and service to their communities.

The ILS MAP program was one of three finalists selected from the initial pool of more than 15 grant applications. The foundation’s distinguished fellows chose the 2013 grant recipient.

“It is an honor and privilege to award our Impact Fund Grant to a project that helps those who have served our country,” said Kelly Johnson of Cohen & Malad LLP and the 2013 president of the Indianapolis Bar Foundation.

As part of the CTC program, individuals transitioning from the Indiana Department of Correction back to their communities have to appear in court regularly. These individuals need professional clothing not only to wear in the courtroom but also for job interviews. However, they often do not have proper attire.

The S.O.S. Settling Our Suits Service Project, spearheaded by President Michael Jasaitis, collected clothing from April 15 through May 1. The response was overwhelming with delivery of the items requiring four trips in two large vans.