William Conour admitted greed drove him to steal almost $7 million from more than 30 former clients, several of them widows and children of people killed in workplace accidents.

Before he was sentenced to 10 years in federal prison Oct. 17, the once-prominent personal-injury and wrongful-death lawyer accepted responsibility in a tearful statement to the court, apologizing for the harm he inflicted on his former client victims, his friends and family, and the legal profession.

“I have let them down, and I have to ask for their forgiveness,” Conour said. “The fault and culpability of this conduct is solely mine.”

But victims weren’t in a forgiving mood during sentencing, saying afterward they were disappointed that Conour received just half the maximum sentence. Some said they felt victimized again.

“We trusted you,” a sobbing Stacy Specht said, testifying Conour stole $486,000 she should have received from her husband Wayne’s wrongful-death settlement to provide for her family. Now she has trouble paying the bills and testified she may have to sell everything she owns to survive.

Marlane Cochlin of Columbia City said Conour took the settlement money negotiated after her husband, Cory, died in a workplace accident. She faces a mountain of her own medical bills now and needs hip surgery.

“My husband left home one day and never returned. He was crushed to death at work,” she said. “How could you take from us who had no earning power – a man who had unlimited earning power?

“I struggle every day to stay on my feet,” Cochlin said. Her husband’s settlement money “was meant to take me through the rest of my life,” she said. “What could he (Conour) have bought that was worth that?

“I can’t ever imagine trusting an attorney again,” Cochlin testified. “Show him the compassion he showed us.”

Eric Stouder of Indianapolis was swindled out of settlement money Conour won for him after his leg was crushed in a workplace accident. Stouder told the court Conour strong-armed him into signing a settlement he disagreed with and later deprived him of proceeds.

“He is a sociopath,” Stouder said. “He deserves no less than the maximum sentence.”

Stouder said not only was he victimized by Conour, but now he’s being pursued because his former lawyer also failed to pay a $60,000 workers’ compensation lien. “They want their money and are coming after me to get it,” Stouder testified.

Afterward, Stouder, like others, expressed disappointment in the 10-year sentence. “It’s pretty light for what he did, I think.”

Chief Judge Richard Young of the U.S. District Court for the Southern District of Indiana adjusted Conour’s sentence downward from the advisory guidelines’ 14-to-17.5-year range recommended in a presentencing report based on defense objections.

Conour’s prior statements and conduct in court were less than sincere, Young said, but he didn’t find they merited more time in prison.
“I thought you were trying to be a little loose with your understanding of the requirements put on you,” Young said, noting Conour’s behavior changed after his bond was revoked and he was ordered jailed for dissipating assets. Conour pleaded guilty shortly thereafter.

“Maybe it took being incarcerated,” Young said, “instead of living in a 10,000-square-foot mansion.”

Young told Conour he couldn’t find a case similar to his, but he sought to impose a sentence that would send a deterrent message to anyone who might think of defrauding people as Conour did. He also ordered Conour to make restitution to victims.

Conour’s actions were “nothing other than greed to finance a lavish lifestyle,” Young said. Conour agreed when Young asked if greed alone motivated him.

Young said he soon will swear in a new class of attorneys and told Conour that “one thing they need to protect is their integrity and reputation.

“You’ve lost it,” he told Conour. “You’ll never get it back. It’s a justified loss considering what you’ve done.”

Young denied a defense request that Conour be released pending assignment by the Bureau of Prisons so that he could have access to computers and records that could help find sources of restitution money. Young also forwarded to the BOP a request from Conour’s family that he be housed in federal prisons either in Huntington, W.Va., or Lexington or Ashland, Ky. 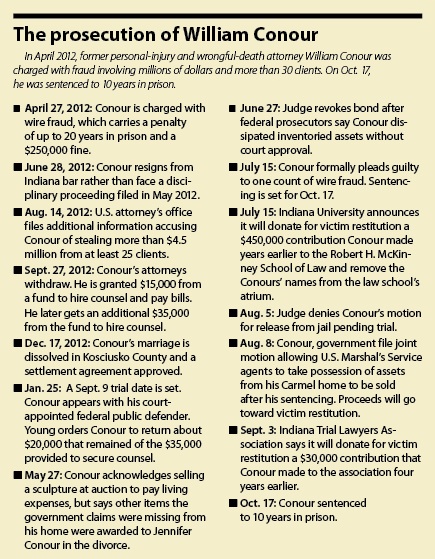 “Paying this debt to my former clients is my No. 1 priority,” Conour said.

Conour, 66, said he operated under the “delusion” that he would repay client settlement money he converted to his own use, and he understood the anger and contempt his victims had for him.

“It was a result I never intended for my clients,” Conour said. “I’m truly sorry for my conduct.”

A court fund contains about $500,000, and an auction of Conour’s assets Nov. 5 is expected to raise another $200,000 or so. There could be other sources of restitution, but any sources are likely to cover only a fraction of the loss.

Young noted that Conour has an extensive network of support and that the court had received numerous letters from family, friends and colleagues that, while expressing dismay about his actions, also urged the judge to consider Conour’s former lengthy successful career when sentencing him.

“In the late 1990s, you lost your way,” Young said, calling Conour’s crimes “almost unconscionable.”
Young said in 24 years he’d never seen a case with the circumstances of those presented by Conour’s deeds. He’s seen many cases where people without his advantages did stupid things, he said, “but what you did wasn’t stupid. You’re a smart man.”

“These are hard cases for me or any other judge to impose sentence on another lawyer,” Young said. He noted Conour’s crimes were “a giant shadow cast over our profession.”

Also perplexing for Young were the statements from Conour’s family expressing the good father and family man he had been during the course of his three marriages.

His eldest daughter, Tonja Eagan, also took the stand as a victim, noting that Conour had taken even her proceeds from a car-crash settlement.

She said her father changed after his third marriage. He became severely depressed, an alcoholic and consumed by materialism. “It was almost like a black hole in his heart he needed to fill” with travel and luxury.

Eagan pleaded for a lenient sentence that would allow him to someday be reunited with his family. “We hope and pray it’s not a life sentence,” she said.•