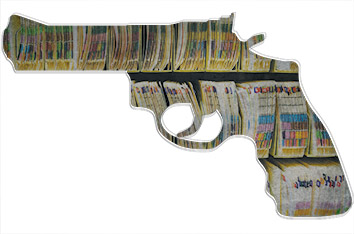 What the U.S. Department of Health and Human Services calls a modification to rules protecting patient privacy has sparked similar outcries from groups that might normally find themselves opposing each other.

The National Alliance on Mental Illness and the Gun Owners of America both have come out against a proposed rule change to the Health Insurance Portability and Accountability Act that would allow health care entities to release the names of some mental health patients to the national firearm background check system.

The proposed rule is part of the Obama administration’s efforts to reduce gun violence by keeping firearms from individuals who are barred by law from possessing them. While the HHS acknowledged it cannot point to any quantified data, it does believe the rule change could increase the reporting to the National Instant Criminal Background Check System of individuals with serious mental health conditions who might pose a risk of gun violence.

Moreover, the HHS contends it is not chipping away at privacy but rather clearing up ambiguities surrounding the mental health prohibitor provision.

Despite the fireworks from national groups, Indiana attorneys say the rule change will mean little to health care providers in the state. The rule is very narrow and, at best, would impact a small number of health care entities.

“We’re telling our clients the change will likely not affect them at all because the exception is extremely limited,” said Stacy Cook, partner at Barnes & Thornburg LLP.

The proposed rule would give permission to – but not require – health care providers that are involved in adjudications or serve as a repository to disclose federal mental health prohibitor information to the National Instant Criminal Background Check System.

Individuals who are banned from possessing or receiving firearms by the mental health prohibitor are profoundly mentally ill, said attorney Mark Swearingen, of Hall Render Killian Heath & Lyman. Based on his experience, he said the people being involuntarily committed had been found doing things like playing in traffic while naked.

The mental health prohibitor includes people who have been involuntary committed to a mental institution, found not guilty by reason of insanity, or been determined by a lawful authority to be a danger to themselves or others.

Health and Human Services emphasizes that neither the prohibitor nor the proposed rule would apply to those who seek treatment for a mental health problem or who voluntarily admit themselves to a mental health facility.

The rule change is being considered, according to the HHS, to remove any perceived barriers created by HIPAA to making this information available to the background check system.

Although offering a rule change based on a perception is unusual, HHS may have had to take this step as reassurance.

In particular, the penalties that come from violating HIPAA regulations keep many health care providers and vendors conscious of where the restrictions are, said Isaac Willett, partner at Faegre Baker Daniels LLP. Stepping over the line can launch a painful investigation that consumes time and resources and, if wrongdoing is uncovered, leads to a hefty fine.

Still, this rule is not expected to impact hospitals, clinics and other medical facilities in the state because Indiana enacted a law in 2009 which requires state courts to collect the names of individuals who fall under the mental health prohibitor criteria and report that information to the Federal Bureau of Investigation for inclusion on the NICS.

Since the state judicial system is typically involved in the events, like involuntary commitment proceedings and trials where the defendant is found guilty but mentally ill, the courts know who qualifies under the mental health prohibitor rule.

Swearingen noted the Indiana General Assembly could, because of the HIPAA proposal, revamp the state law to add an exception allowing health care providers to release mental health prohibitor information. But he does not anticipate the Legislature would spend its time making such a change.

Should the suggested language become part of HIPAA, Cook doubts that will put patient privacy on a slippery slope where more information is released. The proposed exception, she said, is too narrow to provide any leverage for making other openings to medical records.

When it announced this proposed rulemaking, the Department of Health and Human Services contended the change was necessary to remove the obstacles that keep states from reporting to the NICS. The agency cited a 2012 study by the Government Accountability Office that found 17 states had submitted fewer than 10 records of individuals prohibited from having guns for mental health reasons.

According to the rule, the information given to the NICS would include the person’s name, date of birth and gender, along with a code indicating the individual is subject to the mental health prohibitor provision. Another code would identify the reporting entity.

The HHS is considering allowing the entities to disclose extra information to help NICS users confirm that a prospective gun buyer is barred by federal law from owning or receiving a firearm. This additional data would include such things as an individual’s Social Security number, place of birth, height, weight, eye and hair color, and race.

None of the individual’s clinical or diagnostic information will be released to the NICS, according to the HHS.

In a letter to the HHS, the National Alliance on Mental Illness argued if the regulations are amended, the person’s name should be released without identifying the reason why he or she cannot possess or receive a firearm. The alliance saw no need for NICS database to include the information that the individual is banned by the mental health prohibitor rule.

However, the alliance primarily pushed for the proposed rule to be tossed. It described the rulemaking as creating a “special exception” for releasing mental health records to the national database. Moreover, it cited research disputing the perception that those suffering from mental illness are more inclined to violent behavior.

Many commenters posting their reactions on the federal registry website see the proposed HIPAA amendment as an overreach by the Obama administration. Some assert the rule would curtail gun owners’ rights while others worry the rule is another step to eroding personal privacy protections.

Willett views the limits on the kind of information that would be released to be a “reasonable countermeasure” to privacy protection concerns. HIPAA does a good job, he said, of keeping medical records confidential. Yet, with the number of random shootings occurring around the country, the public also has an interest in being protected from harm.

“It truly is a balancing act between serving public safety needs and maintaining individual right to privacy,” Willett said.•