The most serious cases from among more than 950 patients around the nation who claim they were harmed by a Warsaw company’s implanted hip-replacement devices will share in a settlement expected to exceed $100 million, according to an attorney involved in the case. 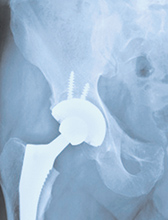 An x-ray shows a Biomet metal-on-metal replacement hip that is the subject of multidistrict litigation in federal court. (Submitted photo)

The case, In Re: Biomet M2a Magnum Hip Implant Product Liability Litigation, 3:12-MD-2391, was initiated by patients who received implanted Biomet M2a Magnum or M2a 38 hip replacement devices that had metal-on-metal ball-and-socket parts that they alleged resulted in a variety of problems.

In the most serious cases, the implant had to be replaced or a “revision” surgery was required to remedy injuries that ranged from shed metal that caused toxic reactions to dislocation or failure of the devices.

Patients who required revision surgery each will be entitled to a base payment of $200,000 under the settlement, which may be discounted if the surgery was required after a significant number of years. The exact number of claims isn’t known, nor is the potential settlement pool, because settlement came just as discovery of claims was proceeding.

“Essentially, anybody that had a revision surgery and had one of the particular metal-on-metal devices will be compensated under the settlement,” he said.

“Plaintiffs and Biomet are mindful of the uncertainties engendered by litigation and are desirous of settling and compromising their differences,” the settlement says.

“Biomet is pleased to have reached this settlement and have the MDL resolved,” the company said in a statement. “Biomet appreciates the guidance provided by Judge Miller to bring this litigation to an expeditious and efficient resolution.”

Dassow said Biomet also has agreed to mediate the cases involving plaintiffs most seriously harmed, probably fewer than 20 implant recipients. Those mediations are scheduled to be completed by December 5, and individual cases that aren’t settled will be remanded.

Under the settlement, plaintiffs will have until April 15 to file a claim to join the mass tort. Patients with problems that didn’t require revision surgery will have their claims stayed until the revision claims are settled. As of Feb. 3, 237 plaintiffs were grouped as non-revision patients, meaning more than 700 may be in the revision group. Based on a calculation of $200,000 per revision plaintiff, the total pool for revision cases alone could exceed $140 million.

Ninety percent of the revision group or two-thirds of the mediation group must agree to the terms before Biomet moves an initial payment of $50 million into escrow, according to the settlement.

Miller set a status hearing for April 24, after the deadline passes for plaintiffs to join the mass tort. By June 13, all plaintiffs must file preliminary disclosure forms with the court.

The forms will disclose the nature of their claims and the extent of alleged injuries from the implants, and their claims will place them on either the revision or non-revision track.

Assigned to Miller in October 2012, Biomet plaintiffs’ claims were designated a mass tort action because the problems were deemed related to product-liability but not common enough to constitute a class.

The Food and Drug Administration in 2013 reported concerns about hip implants designed with metal-on-metal parts after convening an advisory panel a year earlier.

Chiefly, the joint devices may release metal debris when the socket and ball rub together, and metals such as cobalt and chromium can shed and be absorbed into the bloodstream affecting organ function or cause local infections, according to the FDA.

Of 33,394 device problems the agency tracked with the M2a Magnum and significantly similar devices, metal-shedding was most common. Rarer reported problems included difficulty standing and walking and loosening of the replacement hip joint.

“Different people will react to these metal particles in different ways,” the FDA stated last year. “At this time, it is not possible to predict who will experience a reaction,” or the type of reaction.

But after a study on British patients, the medical journal The Lancet reported in 2012 that 6.2 percent of metal-on-metal hip implants required revision surgery within five years, a rate more than three times higher than for plastic-on-metal implants.

The FDA stopped short of advising testing for metal-on-metal hip implant patients who show no symptoms. The agency did, though, recommend that patients follow up with their surgeons every year or two to monitor for any hip-status changes.

“The FDA will continue to gather and review available data on currently marketed metal-on-metal hip implants and will provide updates as necessary to patients and health care providers,” it said.

Prior to the settlement, Miller in December indicated that a few representative cases where patients required revision surgery would be among those selected for the first bellwether trials in June 2015.

The panel referred the case to Miller’s court even though plaintiffs and defendants proposed the cases be heard elsewhere. “Biomet itself is based in nearby Warsaw, Indiana. With many of the relevant documents and witnesses likely found there, the district should be convenient for Biomet,” the panel ruled.

Settling plaintiffs would be subject to a provisional holdback of no more than 6 percent of individual recovery for common benefit attorney fees and costs under the agreement. Biomet also agrees to deposit $6 million into a fund for common attorney fees when the settlement is approved by the required number of plaintiffs.