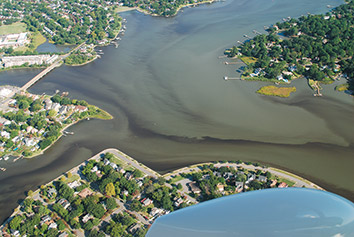 Decades of squabbles over cleaning up one of America’s most historic but polluted waters resulted in an agreement between states and the federal government that supporters say could restore the Chesapeake Bay to a swimmable, fishable national treasure.

But if Indiana and other states without a direct stake in the Chesapeake have their way, the cleanup hashed out between bay states and the Environmental Protection Agency will be stopped.

“To have states outside the bay region file briefs to oppose how we’ve resolved this historic and very thorny problem, I have to say, is a little surprising,” said Jon Mueller, vice president of the Chesapeake Bay Foundation. “It’s a little short-sighted in my view.”

The foundation supports cleanup efforts among the bay watershed states – Delaware, Maryland, New York, Pennsylvania, Virginia, West Virginia and the District of Columbia. Together with the Environmental Protection Agency, they crafted a plan under the Clean Water Act called the Chesapeake Bay TMDL, or total maximum daily load, that sets so-called “pollution diets” for nitrogen, phosphorus and sediment entering the bay from various states.

Those pollutants largely come from agricultural runoff, and about 300 million pounds of nitrogen annually seeps into the bay from streams and rivers in the watershed states. Overabundant nutrients feed algae blooms that create dead zones in the bay.

American Farm Bureau, The Fertilizer Institute and others sued EPA in an effort to block the Chesapeake Bay TMDL plan. A District Court judge upheld the plan, and now the matter is before the 3rd Circuit Court of Appeals in Philadelphia. The case is American Farm Bureau Federation, et al. v. Environmental Protection Agency, 13-4079.

The Office of the Indiana Attorney General is co-author of an amicus brief authored by the Kansas attorney general and representing 21 states that believe the “EPA is exceeding its statutory authority under the Clean Water Act and encroaching upon the sovereign authority of state governments,” according to Bryan Corbin, spokesman for Indiana Attorney General Greg Zoeller.

“The brief contends that if the District Court’s incorrect ruling is not reversed, then it could open the door to EPA dictating state land-management decisions in 31 states in the Mississippi River basin, contrary to the principle of cooperative federalism,” Corbin said.

That argument puts the amicus states in a peculiar position, Mueller said, because District Judge Sylvia H. Rambo of the Middle District of Pennsylvania found the plan “was the result of collaborative, cooperative federalism.”

“They claim it’s a states’ rights issue,” Mueller said of the states challenging the bay plan. “To suggest states don’t have the right to work with the federal government to resolve serious problems would ignore civil rights and hundreds of other issues.”

Mueller said states also have the right to jointly determine that working with EPA on a cleanup is in their interest, as was the case here. “It wasn’t always an easy process, and this was a long, drawn-out fight,” he said.

“Sadly, I don’t think (the amicus states) understand the facts here and accepted the argument of the Farm Bureau whole cloth,” he said.

Now, the outside states’ intervention has led to fighting words. The foundation characterizes the filing as non-interested parties recruited by Big Agriculture lobbyists to reverse a clean-water blueprint they say is working.

“We say to Missouri, Indiana, Kansas, Alaska and the other 17 states, don’t tell us how to restore clean water in our backyard,” foundation president Will Baker said after the brief was filed.

The foundation also responded with an analysis based on EPA water-quality assessments for each of the 21 states signing the brief. It reported that in 2008, 58 percent of Indiana’s rivers and streams and 88 percent of the state’s lakes, ponds and reservoirs were classified as impaired, meaning they don’t meet minimum state water-quality standards.

“The brief filed by the other states more or less contains suggestions the (bay) states acquiesced to an EPA power grab,” Waterhouse said. “There’s a very different story being told by the judge.”

Waterhouse said the brief lends moral support to Farm Bureau and agricultural interests and could serve notice to EPA as “sort of a shot across the bow” that a similar TMDL plan for the Mississippi River, for instance, will be met with resistance from states in the watershed such as Indiana.

“At a philosophical level, I can understand where they’re coming from, but at a factual level, because (the Chesapeake TMDL plan) was done at the request of the states, it seems odd to say EPA can’t act at the states’ request,” Waterhouse said. Besides, intervening with mandates “is not typically how EPA has solved multi-state problems,” he added.

Professor John Nagle teaches environmental law at the University of Notre Dame Law School. He said the Clean Water Act focuses on controlling pollution from point sources such as factories, but that’s not where most of the pollution in the Chesapeake comes from.

“There is lots of disagreement about what (cooperative federalism) actually means,” Nagle said. “That’s especially true with respect to the Total Maximum Daily Loads that are still being fleshed out more than 40 years after Congress enacted the CWA.”

Waterhouse agreed. “The concern here is that non-point sources … which are largely farming, timber and other types of enterprises, are going to be subject to greater control by the EPA through the TMDL process,” he said.

The states’ amicus brief asks the 3rd Circuit to “reject EPA’s attempt to expand its authority at the expense of states’ traditional control over land management decisions without a clear statement from Congress.” It argues that the authority EPA seeks would allow it to make decisions for agricultural land that “produces half the nation’s corn, 41 percent of the nation’s soybean exports, and one-third of all the nation’s hog and pig sales.”

Nagle said he believes EPA can prevail by persuading the court that the Clean Water Act is unclear with respect to TMDL regulation. “So the petitioners have to persuade the court that the CWA clearly answers this question in a way that precludes EPA’s interpretation.”

He said the amicus states’ argument that EPA relied on coercion to obtain the bay states’ acquiescence doesn’t seem strong, but other elements could be persuasive.

“The petitioners make a good argument that EPA has failed to heed the statutory focus on the ‘total’ maximum daily load of pollutants, and instead EPA has looked at each separate part rather than just the total,” Nagle said. “It may help the petitioners that another court interpreted ‘daily’ literally to mean that pollution levels cannot be measured on an hourly or annual basis, for example.”

Bay states have responded with a brief in support of EPA, and Mueller said short of a clear showing of reversible error by the District Court, the cleanup plan should be allowed to proceed.

“We’re hoping we prevail and the rest of the nation will get to see the fruits of our efforts,” he said.•