A fire during a renovation project that devastated a southern Indiana courthouse ignited a dispute between the county and the contractor that persuaded the Indiana Court of Appeals to reverse course and adopt a new approach to interpreting construction contracts.

The Court of Appeals has historically taken the so-called “minority approach” to determine what the waiver of subrogation covers, even applying that approach as recently as October 2013. However, in reviewing an appeal by Jefferson County commissioners in February, two of the three judges on the panel found the “majority approach” rendered a “more logical and compelling resolution.”

Attorneys say the long-term impact of the decision in The Board of Commissioners of the County of Jefferson v. Teton Corp, et al., 72A04-1302-CT-55, will probably come to light on a case-by-case basis, but at present the dispute underscores the importance of making sure property owners have all the required insurance when starting a construction project. 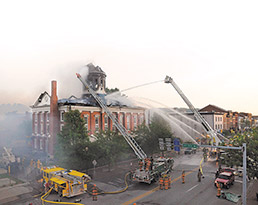 A fire during a reconstruction project on the county courthouse in historic Madison required nearly 200 firefighters and millions of gallons of water to extinguish. (Photo courtesy of The Madison Courier)

The Court of Appeals, according to William Kelley Jr., attorney at Drewry Simmons Vornehm LLP, seems to be suggesting that the county missed an opportunity by not purchasing all the insurance required in the contract.

However, what Kelley and Sam Laurin, partner at Bose McKinney & Evans LLP, question is whether the extra insurance would have covered the damages for which Jefferson County was seeking payment.

Prior to starting a refurbishing project on its historic courthouse in Madison, the Jefferson County commissioners entered into an American Institute of Architects contract with the general contractor, Teton Corp. The contract required the county to purchase builder’s risk insurance or, if it did not, to tell Teton of its decision to forgo the extra insurance.

Jefferson County did not get the builder’s risk coverage and did not inform the contractor. The appellate court concluded the county breached the contract when it failed to let Teton know it did not buy separate coverage.

The Jefferson County courthouse caught fire during renovations in May 2009, causing more than $6 million in damages.

The Court of Appeals rejected Jefferson County’s argument that embodied the approach taken by a minority of courts in other states, including Indiana, of dividing the project into work directly related to the construction project and non-work that is not part of the project. In its argument, the county asserted the damage to the courthouse included non-work property and that under the terms of the AIA contract, Teton was responsible for getting insurance to cover claims that fit the “other than to the work” clause.

Looking at the language of the AIA contract, the appeals court determined the county’s minority view of the waiver of subrogation ignored that language and its intent. Consequently, the Court of Appeals said the approach taken by a majority of state courts that disregards work versus non-work property and instead considers both the language of the AIA contract and the public policy behind it was the “better interpretation of the ambiguity in the contract and the better approach to risk allocation in construction projects in general.”

Laurin, chair of the construction law group at Bose, said the opinion is unclear as to what damages the county was trying to recover and, more importantly, whether those damages would have been covered by the builder’s risk insurance.

The issues raised in this case, Laurin continued, highlight the particular issues that come up when new construction is being performed in an existing building or an addition is built.

A change in wording

The AIA contract has ambiguities but, Kelley said, because that contract has been so widely used, many courts have interpreted the language and now few provisions still need treatment by the courts.

Yet ambiguities exist and that gives rise to differing interpretations. During oral arguments, COA Judge Edward Najam pointed out that counsel for both sides were each advocating for the same thing: that a plain reading of the contract will provide the answer to this case.

In her dissent, Brown noted a change in the contract language that, to her, made a significant difference.

The standard AIA contract provides that the owner insures properties “at or adjacent” to the site with policies separate from those policies covering the project. In Jefferson County’s case, the word “at” was replaced with “adjoining.”

Accordingly, Brown argued based on the contract’s language, the waiver of subrogation only applied to sites next to the courthouse and not the courthouse itself.

In further reading the contract, Brown sided with Jefferson County, finding the minority approach “applies with equal force.” The county had a policy that covered work-related damages and by substituting “adjoining” for “at,” the parties agreed the contractor would assume the risk for any non-work damages to the courthouse.

In the Allen County case, a diesel-fuel leak caused by a pipe ruptured during the installation of a concrete floor in the library’s basement created an environmental mess. After cleaning up the fuel, the library filed a claim under its builder’s risk policy. When the insurance company only paid the $5,000 policy limit, the library sued the general contractor and subcontractors to recover the nearly $500,000 it had paid to remove the fuel.

The Court of Appeals ruled the waiver of subrogation did not apply because the contract did not require the library to obtain insurance for damage to property surrounding the jobsite. The fuel spill was not part of “the work” as defined by the contract.

Looking at the Allen County Library decision, the Court of Appeals contended the library would still be successful under the majority approach. But the amount of the library’s recovery would have been limited to the $5,000 set in the environmental provision of the insurance policy.

As the Court of Appeals noted in its finding against Jefferson County, the Indiana Supreme Court has not addressed the waiver of subrogation issue. The litigation arising from a fuel leak in a library and a courthouse fire might provide the Supreme Court with the reason to weigh in.

In the meantime, Kelley emphasized the lesson from Jefferson County is that both the property owner and contractor should have some idea what the waiver language encompasses.•