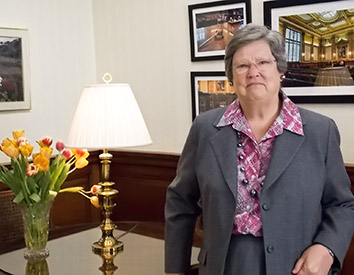 Attorneys and judges alike say whenever Judge Sarah Evans Barker is on the bench, there is no question who is in charge in that courtroom. This is a judge they universally describe as well-prepared, well-organized and authoritative, but not averse to occasionally introducing a little humor in the proceedings.

It is not surprising that when Barker, U.S. District judge for the Southern District of Indiana, announced her plans to take senior status June 30, many in the legal community caught their breath. Then they learned that she will be continuing to work at full bore until a successor is appointed, and only at that time will she cut her caseload slightly.

“It means she is still going to be in the federal court, which is good news,” he said.

Thirty years ago, Barker was tapped for the federal bench. She was confirmed by the U.S. Senate in 1984, becoming the first woman to serve as a District Court judge in Indiana.

Even before she put on a judicial robe, Barker had been kicking at the glass ceiling. In 1972, she was the first female hired as assistant U.S. attorney for the Southern District of Indiana. Nine years later, she was appointed U.S. attorney, then being just one of two women to serve in that position.

Barker said she knew that serving as a federal judge would be challenging and take all the talent she had, but it would also be interesting and rewarding.

“You have an extended reach as a judge into our society to affect the relationship and the course of events and the interpretation of law,” Barker said. “So you do that with a modesty, you do that within the parameters of your role and with a sense that your part is only to give things a little nudge, not to be preemptive in terms of reorganizing people’s lives and affairs.”

Along the way, Barker always took time to mentor and help attorneys build their careers. She played matchmaker, pointing lawyers to opportunities both in the profession as well as in the community.

Sam Laurin, partner at Bose, faced Barker two times as a young attorney, barely six years into his practice. One day, he asked if the court could end session early so he could go home for his daughter’s birthday. Barker readily obliged, and then they spent a few minutes off the record talking about their children.

Laurin knew to be prepared when going to Barker’s court and to never be late, a lesson he learned when opposing counsel arrived after the appointed hour.

“The trains are going to run on time in her court, but there is time for occasional levity as well,” Laurin said.

The Southern District of Indiana is one of the busiest District courts in the country and that, Barker said, is one of her primary motivators for her decision to transition at this time – an additional judge will bring relief to the docket. Once she becomes a senior judge, a vacancy will open on the five-member court and once a new judge is appointed, she will cut her caseload to 80 percent. Her reduced caseload, combined with Senior Judge Larry McKinney’s caseload, will essentially add a sixth judge to the Southern District.

“For me, part of the fun has been to come in every day and see what arrives in my inbox and then to see if I am up to the challenges it presents,” Barker said. “I’ll just keep doing it that way.”

Three decades has filled her docket with a wealth of cases, but she does not want to choose which was more special, comparing it to asking a mother to choose her favorite child. Every case deserved her careful attention and best effort, she said.

When rendering an opinion, Barker maintained the judge has the role and responsibility to stay limited to the legal question being presented by the case.

She pointed to her decision in the complaint over the state’s voter ID law, eventually upheld by the Supreme Court of the United States in Crawford v. Marion County Election Board, as an example. There, she said, she addressed the ID law as it was argued and on the basis of the facts and law as presented found the statute to be constitutional. She emphasized she did not rule on the wisdom of the voter law, nor did she tell the Legislature what she thought the state should do.

“That sort of captures my sense of what a judge does,” Barker said. “You decide the case before you, you don’t decide wider issues.”

The judge’s role, Barker continued, is to render a decision on the case presented. From the bench, the judicial officer should look at the parties, look at the mechanics of the case as to whether it was brought in the proper venue at the right time, and are the right issues being raised when attacking the statute.

One of the cases that solidified Barker’s judicial reputation was the Bridgestone/Firestone Tire Products multidistrict litigation that involved more than 800 lawsuits from all over the United States and overseas. The case was assigned to Barker in 2000 and took a decade to resolve with the first four years being the busiest.

To help with the massive litigation, Barker called upon U.S. Magistrate Judge V. Sue Shields and appointed Debra McVicker Lynch, now a magistrate judge with the Southern District, to the special master position.

Lynch had developed an interest in being a judge during the two years she served as Barker’s first female law clerk. She has no doubt Barker had her in mind when she asked the Judicial Panel on Multidistrict Litigation for a special master.

At the first pretrial conference of the Bridgestone/Firestone litigation, Barker’s courtroom was a sea of mostly male lawyers dressed in black and gray suits. Lynch remembers entering with Barker and Shields – three women in charge of a major case that involved numerous issues and countless plaintiffs.

Barker and her decision to put women on the team must have sent a strong message. At the next pretrial conference, Lynch said, more women lawyers were in attendance.

Outside the courtroom, Barker continued to champion women. She was a driving force behind the Women in Law Conference, previously sponsored by Indiana Lawyer, which brought the female members of the bar together to network and talk about issues in their practices, including balancing work with families.

Indiana Court of Appeals Chief Judge Nancy Vaidik remembers picking up the phone shortly after she had arrived in Indianapolis and hearing Barker introduce herself and offer an invitation to lunch. Vaidik is now following Barker’s lead by mentoring and helping young women as well as her law students at Indiana University Maurer School of Law.

“Judge Barker knew she had a responsibility,” Vaidik said. “She told me she knew if she screwed up she would set back other women. Her most lasting legacy is not the cases and not (being) the first woman. It is her generosity and mentoring of other women in her own funny, smart, lady-like way.”•