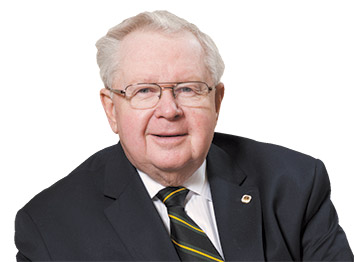 When Joseph T. Bumbleburg earned his law degree in 1961, instead of joining a firm, he shipped out on active duty in the Judge Advocate General’s Corps until 1964. He was commissioned First Lieutenant in the U.S. Army Reserve. He joined Ball Eggleston P.C. in 1964, where he focuses on real estate development, municipal law, zoning and subdivision law. He also has extensive civil trial experience. Joe serves as judge advocate for the American Legion Department of Indiana, a position he’s held since 1999. He’s active with his law school alma mater, often serving as a judge for the Sherman Minton Moot Court Competition. Joe was on the board of trustees for Ivy Tech Community College for 15 years and currently sits on the board of directors for the Tippecanoe County chapter of the American Red Cross.

You’ve been practicing law for 50 years. What legal skills or traditions have faded away over the years that you would like to see return?

Civility; extemporaneous speaking in the courtroom.

Yes. The “take no prisoners” attitude and the use of discovery not as a legal tool, but as a weapon.

What is the best thing about practicing law in Lafayette?

Lafayette is home, and I’m helping many people that I grew up with.

I enjoyed three years of military practice in the Army and attendance at the U.S. Army Infantry School that was required before the Judge Advocate School.

Make time to be with family.

Find a hobby and do it.

What hobbies do you enjoy?

Antiques and going to auctions.

I tend to be an open book.

I enjoy it. It’s a field that needs to be done.

TV has not helped. Many people do not know what lawyers really do.