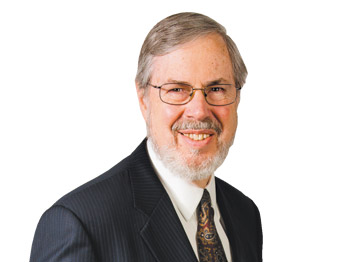 James A. Strain is a seasoned attorney who cut his teeth on the takeover wars in Indiana in the mid 1970s and 1980s. As a result of this experience, he became one of the architects of the Indiana Business Corporation Law. As the senior active business lawyer in the firm, Jim is a constant resource for young attorneys on corporate and securities law. He served as president of the Historical Society of the Southern District of Indiana from 2003 to 2012 and is active with many arts organizations in Indianapolis. When he’s not practicing law, you may be able to find Jim behind the camera or a piano.

My most memorable non-legal job (not the worst) was being a janitor at Indiana University during my college years. I was assigned to the law school, as my brother had been before me. One of my tasks was to clean the law school on Sunday mornings, and I would encounter Val Nolan Jr., my first real mentor. Val would invariably break the brand new Xerox machine and seek me out to fix it for him. He was my introduction to the law and the reason I became a lawyer.

Some jobs are obviously memorable. Clerking for a justice of the United States Supreme Court, for example, is an experience not to be missed if offered. There is not a day that goes by without my thinking about some aspect of my year with Justice Rehnquist.

When I began, lawyering was very clearly a profession. Client service, pride in producing a good product, and comradeship were all expressed as important parts of the law firm experience. Today, the emphasis is much more on the business of lawyering. Client service is still important, but only because it produces more business. A good product is not as important as results. And, if we are lucky, comradeship still shows up, but it is not emphasized in the same way.

You’re an artistic guy: you sing and are a photographer. What do you enjoy most about these creative outlets?

And play the piano! These outlets provide me a way to use a different part of my brain on a regular basis. This is not to say that one cannot be creative in the use of the law, of course. And maybe participating in the arts helps me in thinking creatively in the law. I doubt, however, that it works the other way around.

And speaking of singing, you’re a part of The Torts, who sing parodies of commercial jingles. What is your favorite parody you’ve performed so far?

Most of our parody songs are hits from the past – the way past. We have one young lawyer who can do a mean interpretation of Frankie Valli. Another imitates Bruce Springsteen. My personal favorite was one where I was the soloist (natch). We did a parody of the Sandpipers hit, “Come Saturday Morning.” I think it was for Nancy Irsay’s party barn that she would let community groups use or would otherwise rent for events. She was one of the sponsors of the IRT Radio Show that year so she got a jingle.

If I had had sufficient talent, I would have loved to have been a jazz pianist. When I took piano performance at IU’s Music School, it was obvious that many very talented pianists could never earn a living performing. Today, when I see performers like Tom Lauderdale (of Pink Martini) or Gary Walters (local jazz pianist extraordinaire), I wonder whether I could have done that.

This one is easy. When I was a pup at Cahill Gordon, I was spending about half of my time in corporate (mainly corporate securities) and the other half in litigation. Then, when I came to Barnes Hickam Pantzer & Boyd (the predecessor to Barnes & Thornburg) following my clerkship, I maintained that same approximate split, with the litigation side being in appellate litigation primarily. I was then lucky enough to hire someone who was smarter than I was as an appellate litigator, Stan Fickle, and gave that up to be full-time corporate/securities. Because of my being able to cross over, I was well-suited for the takeover wars, however, working there most often with Jim McDermott (another mentor). And even in later years, when I was fully corporate/securities, I still had to, or got to (depending on one’s point of view), stand up in courts and make legal arguments.

Don’t sweat the small stuff and its corollary, everything is small stuff. This important lesson was impressed upon me by another of my mentors, Dick Deer, when we were both partners at Barnes & Thornburg.

See above. In the 1970s and 80s, we had a number of hostile takeovers in this state. One Sunday morning, as I was heading off to the office at 6:30 a.m. to work on one of those fights, my then 2-year-old son appeared and grabbed me around the legs (all he could reach). He said, “Don’t go, Daddy.” While I did not stay home that day, I also never forgot it. Gradually, with time and with his little voice ringing in my ears, I went less and less.

Most folks do not know that I am a wizard with a Big Green Egg (a kind of charcoal grill). Like making a morning cappuccino, fussing with the Big Green Egg is just the kind of nerdy activity that I love and my spouse hates.

How has the law in business and finance changed since you started?

Several big changes have occurred during my career. First, the simplification/combination of the disclosure regimes of the federal securities laws has changed mightily the way we practice and the uses for outside lawyers. Most compliance/disclosure law has become a commodity. Second, the advent of complex financing devices now in common use, e.g., all manner of derivatives, has made a new kind of specialist in the business and finance area, and moved more and more of that very specialized business to the money centers, principally New York. Third, the penchant that the Delaware courts have had for announcing new and different corporate governance standards, seemingly weekly (a trend that is unlikely to stop with Chief Justice (Leo) Strine’s ascendance) has led to heightened awareness on the part of public company directors that they are no longer in an “old boys club.” And fourth, the passage of the Sarbanes-Oxley Act of 2002 and the Dodd-Frank Act have focused directors even more acutely to the financial aspects of managing corporations. Indeed, the most sought after kind of public company director today seems to be a retired accounting firm partner who can chair the audit committee.

Rusty Sabich in Scott Turow’s “Presumed Innocent.” Obviously, I could not approve of everything he did, but he was a fascinating character in a chilling tale.

Agency. It wasn’t that the subject matter was bad, but the professor was teaching his very first course, and he was not suited to the task. He had come from a big Chicago law firm and after one year went back to that same big law firm. Now that I think about it, I mostly did skip Agency.

It’s interesting. Like politicians, people have negative stereotypes about lawyers in general, but also in general like THEIR lawyer. In most instances, the general public has no reason ever to encounter a lawyer. When they do, however, usually it is not because anything good is happening to them. Perhaps someone was in an auto accident and some lawyer accuses him or her of being a malingerer. Whatever the occasion is for John Q. Public to encounter a lawyer, more often than not it is not for anything happy.

Is there a moment in your career you wish you could do over? Care to share?

Wow! Historically, (wife) Cheryl and I have been most interested in arts and education. For me that has principally meant the Indiana Repertory Theatre and the Indianapolis Symphony Orchestra. Cheryl has been most interested in Arts for Learning (Young Audiences), the International Violin Competition of Indianapolis and Dance Kaleidoscope. But there are so many good causes that are worthy of support that it is hard to narrow down the answer to the one that has been “most” important. And what is “most” important changes. For example, last year when we had the unfortunate mess with the ISO, it was “most” important to me that Indianapolis not lose the ISO.

Oh my goodness, yes. Over the years, this has been a focus of the 7th Circuit Bar Association (of which I was president in 1995-96). In the early years of my practice, even when we were engaged in hostile takeover wars, it seemed that opposing lawyers were still civil to each other and another lawyer’s word was his or her bond. Today it is much different. In some instances, not all, it is client driven. One would hope that the courts could exert more control over the process to lessen the amount of incivility, but often they think their hands are tied by the idea that they must give everyone his or her day in court.