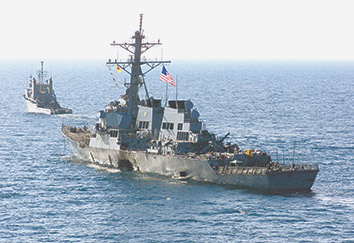 Sitting in a hotel room, preparing to watch a video cast of a hearing with Abd al-Rahim al-Nashiri, one of the alleged masterminds behind the bombing of the USS Cole, Whitney Coffin considered the process of using military commissions to try suspected terrorists.

“Before I actually see the hearing, my pre-impression is this is the best way to do it,” Coffin, a 2014 graduate of Indiana University Robert H. McKinney School of Law, said. “Some push to put this in federal courts, but what state is going to want an accused terrorist in their state? It’s a military commission. I think it’s necessary to have (the commissions) in Cuba where it has always been in Guantanamo Bay.”

Indiana Court of Appeals Judge Patricia Riley holds a very different opinion. After she returned from a week in Guantanamo where she observed other hearings for al-Nashiri, she struggled to describe what she witnessed.

“When people hear that I’ve been there, they ask, ‘What’s it like? What happened?’” Riley said. “All I’ve been able to say is, ‘it’s disturbing.’”

The differing views reflect the questions, confusion and anger surrounding the court proceedings at Guantanamo Bay. The United States is navigating new territory judicially as well as emotionally as it attempts to figure out how to try these detainees. They are individuals who do not fit the traditional definitions of soldiers, and they are accused of committing acts of terrorism that do not adhere to the rules of conventional warfare.

As Coffin pointed out, “Guantanamo Bay is such a gray area.”

Shining a light into the grayness is the U.S. Military Commission Observation Project at IU McKinney School of Law. Students, faculty, staff and alumni are joining organizations to watch the hearings and blog about their thoughts and impressions.

The continuing project is part of the law school’s Program in International Human Rights Law founded by IU McKinney Professor George Edwards. In February the program was awarded nongovernmental organization observer status by the Pentagon’s Convening Authority for Guantanamo Bay U.S. Military Commissions. Other groups that have observer status include the American Bar Association, the American Civil Liberties Union and Amnesty International.

In particular, Edwards said, the observation program fit well with PIHRL’s teaching, research and service responsibilities in the area of international human rights law. A key component of the IU McKinney observation project is that the participants will share their experiences with the ongoing military commission with others.

Recent blog entries from the IU McKinney participants provide colorful details about every part of the process – from what they packed and how they traveled to the observation site, to descriptions of courtrooms and summaries of the arguments presented by the prosecutors and defense attorneys.

Third-year IU McKinney student Kristi McMains wrote about her surprise that the defendant, al-Nashiri, looked like any man walking down the street. He was clean-shaven with a head of dark hair, and during the proceeding he was “leaning back in his chair, yawning and looking sort of nonchalant about what was happening around him.”

Participants in the Military Commission Observation Project are sent either to Fort Meade in Maryland where they watch a video feed of the hearing being conducted at Guantanamo Bay or to Guantanamo Bay itself to witness the proceedings in person.

The IU McKinney students who apply to observe typically have an interest in national security law and counterterrorism. In their blog entries and conversations, they are generally supportive of the military commission system, maintaining the defendants are getting a fair trial.

Students and graduates prepare for the observations by studying the military commission process. Prior to spending a week in Guantanamo Bay, Riley read extensively about the detention center and the detainees. She also talked to Indiana attorney Richard Kammen, who is the lead defense counsel for al-Nashiri.

“I wanted to be a witness,” Riley said of her reason for participating. “I really think that we’re going to be on the wrong side of history on this issue so I wanted to watch it for myself and try to understand legally how this could be happening.”

The observation project is not the first time IU McKinney has been involved with the military commissions. Under Edwards’ direction, PIHRL did legal work in 2003 and 2004 on behalf of the defense of 800 detainees then being held at Guantanamo Bay. Again in 2007 and 2008, the program provided some assistance for Omar Khadr, a Canadian detainee.

In addition, Edwards was selected as an expert witness for the trial of David Hicks, the Australian detainee who was the first person convicted in a U.S. military commission since World War II.

Edwards said the work done for the defense is not reflective of any bias on the part of his program. The defense counsel simply called first, he said, and if the prosecution had reached out, the program might have done work for that side.

The neutrality extends to the observation project. Edwards said he seeks to attend, observe, analyze, critique and report.

The observers, Edwards said, can bring the global community into Guantanamo by going to the hearings with an open mind, a clear mind and an informed mind.

Observing the hearings is demanding work done under tight security that is unusual and unfamiliar for many individuals who participate.

At Guantanamo Bay, the observers were escorted from their tents to a pre-fabricated building where the courtroom is located, Riley said. They walked through a security screening, much like those at airports, at the end of which a young soldier stood behind a podium and wrote each observer’s name in an old-fashioned ledger book.

Inside, the observers were assigned seats in the courtroom gallery which is separated from the judge and attorneys by two panes of glass. They could see what was happening through the glass, but the audio comes from the large monitors which show a video of the proceedings with a 40-second delay.

At Fort Meade, the observers see the same video feed. It is shown in a large movie theater but, as in Guantanamo, the participants are not allowed to bring anything other than pen and paper into the room.

Jeffrey Kerner, a 2002 graduate of IU McKinney, described his experience at Fort Meade as sitting in the 100-year-old theater next to a 75-year-old usher. Recounting the experience, he, too, raised questions about public access, wondering why the proceedings are not streamed over the Internet allowing him to watch the hearings on his computer from home.

The trial of al-Nashiri has yet to start. Hearings being conducted now are going over the various motions filed by the defense and the prosecution.

And that caused additional concern for Kerner, who worried about the pace of the proceedings. He said bright people are on both sides, but the process is getting bogged down in multiple motions and hearings. He sees danger that the process could continue without end.•

Read more about other  Hoosiers’ involvement with the proceedings at Guantanamo Bay, including the Indiana lawyer representing Abd al-Rahim al-Nashiri.