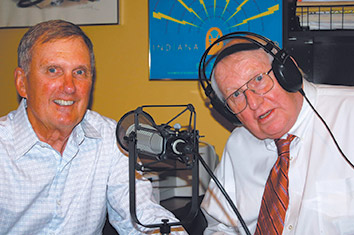 In the world of radio, this was crunch time.

Even though the two disc jockeys were recording their show and were not live on the air, they still had to pay close attention to ensure they played enough music to stretch comfortably into the seven minutes reserved for the newscast at the top of the hour.

The pair had to get the timing just right so the recording engineer could do a board fade, steadily turning down the volume to the last piece and sliding into the spot for the news.

Each week longtime friends Bill Satterlee, managing partner at Hoeppner Wagner & Evans LLP in Valparaiso, and Kent Lindquist, senior judge for the Bankruptcy Court in the U.S. District Court for the Northern District of Indiana, share their mutual love of jazz by recording a two-hour show that airs Sunday nights on the local public radio station.

They meet at a recording studio in Crown Point Tuesday evenings, settle behind the microphones, and play a variety of ballads and up-tempo tunes from the genre they describe as mainstream jazz. Vocalists and instrumentalists, trios, quartets and big bands, standards and obscure songs from their own extensive CD collections are mixed into each show and sprinkled with Lindquist’s and Satterlee’s voluminous knowledge of the music and musicians.

Although the two legal professionals started their radio spot, “The Feeling of Jazz,” 25 years ago, they do not shrug off the recording sessions. Indeed, their enthusiasm and work ethic was on display as they prepared to finish the first hour of the show that aired Aug. 10.

Lindquist, seated in the studio’s corner opposite the engineer, discussed the crunch time plan with his co-host while another jazz work was playing and the microphones were switched off.

“You can do a short one, and I can do the board fade, or you can do a long one,” the federal judge offered.

Neither Satterlee nor Lindquist had any radio experience before they first signed on the air in 1989. Memories are fuzzy as to how exactly things got started, but Satterlee pitched his idea for a jazz show to his friend and former U.S.

Army buddy John Meyer who had founded the Crown Point radio station that became WWJY-FM. Then Satterlee enlisted his colleague, Lindquist, to help spin the records and talk about the music.

At first, the show was done live on the commercial station WWJY. The recording engineer sat in one studio while Lindquist and Satterlee sat in an adjoining studio. The pair watched for hand signals from the engineer to know when to back announce one work and introduce the next piece.

At one point, the show bounced to WIMS AM 1420 before Lindquist and Satterlee took a break from radio. They returned after a couple of years and now their program is part of the lineup on Lakeshore Public Media 89.1FM, based in Merrillville.

Like the music they love, the judge and the attorney are a contrast in styles in the studio.

Lindquist sits up straight at his microphone, keeping his headphones on through the entire session. He plans for each show and, lately, he has been spending the two hours highlighting a particular musician or composer. When his turn to speak arrives, he refers to his hand-drawn chart that includes the artist, song title and album along with interesting tidbits for each piece on his playlist.

Satterlee, meanwhile, crosses his legs, folds his arms and relaxes in his chair. As he prepares to take the cue from the engineer, Satterlee slips the headphones over his ears and leans into the microphone.

Occasionally, he picks up the canvas tote bag that has been resting by his feet, sets it in his lap, opens it and stares intently inside at its contents. That bag contains his playlist. Before he leaves the house for the recording session, he grabs about 15 CDs and surprises himself when he gets to the studio.

For the close of the first hour of the Aug. 10 show, Satterlee selected saxophonist Art Pepper playing his own composition “Susie the Poodle.”

Lindquist followed with a rendition of “You Stepped Out of a Dream” featuring tenor saxophonist Eli “Lucky” Thompson. He introduced the piece that would serve as the board fade and teased the second hour of the show.

“You’ve been listening to ‘The Feeling of Jazz’ here on Lakeshore 89.1 FM for the better part of the last hour,” Lindquist said into the microphone. “We’re going to take a break for the news at the top of the hour and we’ll be back for the second hour. We hope you’ll stick around.”

Once the song started playing, Lindquist realized he had made a mistake. He had misread the length of the piece so instead of running for 4 minutes and 21 seconds, it was actually only 2 minutes and 41 seconds.

Uh oh. Crunch time was foiled by a misstep.

David Woodwort, the recording engineer and show’s producer, told Lindquist not to worry. The hour’s final tune would be long enough.

With changes in the radio industry that have homogenized the formats and shrunk local programming, Meyer credited Satterlee and Lindquist with keeping jazz on the air in northwest Indiana. The unassuming, jovial duo brings creativity that Meyer said is often missing from broadcasting.

Lindquist and Satterlee, both graduates of Valparaiso University Law School, have a strong connection to jazz that they each trace back to their childhoods.

The judge first heard the music when he was about 12 years old and an older cousin handed him a couple of records. He has listened ever since and now often spends Sunday evenings with the baseball or football game muted on the television while he keeps his ear on the jazz playing over the radio.

As a senior in high school, Lindquist started playing the upright bass. He continued plucking as much jazz as he could through college and law school for weddings and bar mitzvahs. The gigs put spending money into his pocket, but once he started practicing law the musical jobs became too much for a busy lawyer’s schedule, so he quit.

Growing up in Pittsburgh, he often went to the dance halls where he heard the touring big bands play. He still seeks out live performances, often traveling to jazz clubs in Chicago and Clearwater, Florida.

Lately, he has been listening to a lot of Latin jazz, which inspired him to purchase a pair of conga drums and try his hand at thumping out some rhythms.

Once the recording for the second hour of the show is underway, Satterlee stepped out of the studio to retrieve a bag of chocolate cookies.

Taking the treat from his friend, Lindquist quipped, “If we get through the first hour without too many goofs, we get a cookie.”

“And if we get too many goofs,” Satterlee added, “we still get a cookie.”•