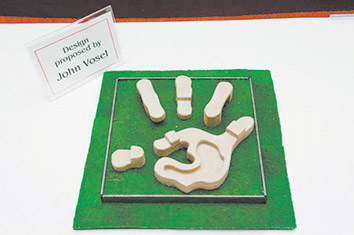 A plan by the inaugural class of the Indiana State Bar Association’s Leadership Development Academy to honor retired Indiana Chief Justice Randall Shepard has unraveled, and class members are preparing to consider several options for moving forward, including scrapping the project altogether.

Members of the 2012 group developed an ambitious proposition to fulfill their required class service project. They decided to commission and raise money for an original piece of art which would not only commemorate Shepard’s time on the bench but also promote the ISBA’s push for healthy living by having the artwork be big enough that children could play on it.

The expectation was that the artwork would be finished and installed in Shepard’s hometown of Evansville by the summer of 2013, but more than two years after it began, the project is still on the drawing board. The artwork has not been fabricated, the park where the sculpture was to be located has not been developed, and leadership has changed both on the steering committee and in city hall.

“I think ‘stalled’ is a good word,” Allen Circuit Judge Thomas Felts said of the project’s status. “It stalled for a host of reasons.”

Felts is chair of the ISBA Leadership Development Academy Committee that oversees the program. Acknowledging the Shepard art project needs to be “reinvigorated,” Felts said the steering committee is scheduled to meet in January to discuss the best way to bring the project to a conclusion.

Felts acknowledged when the first LDA class was told to do a service project, the only guidance the members received was to think big. With no precedent or realization of what an LDA class could actually do, Felts said the “bunch of starry-eyed, highly motivated young lawyers” conceived a project that was too much, involving a competition, fundraising and coordination with public officials.

At the beginning, the project’s steering committee chose Evansville’s Bicentennial Park for the artwork. The downtown park was in the planning stages then, and the goal was to transform the vacant lot into an urban green space to mark the city’s 200th birthday in 2012.

The Evansville Department of Metropolitan Development coordinated the creation of the park. Philip Hooper was the department’s executive director when the LDA team came to look at a handful of potential sites for the monument.

Hooper, who has since left the city to work in the private sector, said during that period the park and the LDA project were on different time schedules and the details of each were being finalized.

Casey Kannenberg, who was spearheading the steering committee, said although Evansville officials initially welcomed the Shepard project, it soon became unclear what was happening with the park.

The city appeared to not really know what to do with the park, he said, accusing officials of just stringing the committee along. Stephanie Hahn, also a member of the steering committee, agreed, saying the city seemed to have put the project on the back burner.

While working with Evansville, the LDA continued with the other elements of the project. A March 2013 reception at Wabash College, which Shepard attended, unveiled the winning entry in the Shepard Public Art Project competition. Student John Vosel received a $2,000 scholarship for his rendering of a child’s hand meant to highlight the former chief justice’s affection for children.

At the same time, LDA class members were soliciting contributions. Kannenberg, describing the fundraising as “very, very successful,” estimated the class had collected close to $40,000 and believes more money could have been raised.

Donors, he said, included the legal community along with businesses like Old National Bank, Vectren Corp. and Shoe Carnival.

The Evansville Bar Association received a packet of information about the Shepard monument and Doug Briody, then president of the association, remembered the board members being enthusiastic about the plans. In support, the EBA contributed $4,500 and the Evansville Bar Foundation topped that with $500.

“We were excited to make a generous contribution in honor of Chief Justice Shepard’s work in our community and statewide,” Briody said. “We think it is a fitting tribute to him and like having it here in Evansville.”

Looking back, he thinks the board still would have made the contribution even if it had known the project would take longer than expected to complete.

“I’m hopeful we’ll see that project come to fruition in the not too distant future,” Briody said.

The idea for the artwork still sparks excitement even though its future is uncertain. Speaking recently, Kelley Coures, the current executive director of the Department of Metropolitan Development, said he was unaware of the project but was immediately taken by the proposal.

“Randy is one of my mentors in life,” Coures said of Shepard. “He has been a good friend, always giving me sound advice.”

But the momentum for the project has waned. Like Hooper, Kannenberg accepted a new job. That job required him to move to Colorado and vacate his seat on the steering committee. 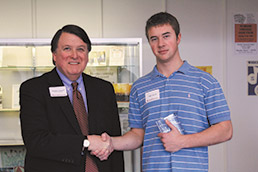 Another setback – Bicentennial Park got sidelined. The major hit to the park came when $1.9 million in revenues was sliced from the downtown’s Tax Increment Financing District after a large property owner successfully appealed his property tax assessment. On top of that, a budget battle erupted between the city council and the mayor, and priorities shifted in the downtown with the announcement of a new hotel and conference center and the opening of the new Indiana University Medical School.

“I would not call it dead,” Coures said of Bicentennial Park, “but I would call it comatose.”

The Shepard project was rebooted when LDA class member Sarah Dauer joined the Evansville Parks Board. She approached Denise Johnson, director of the Evansville Department of Parks and Recreation, about getting the project restarted.

Johnson jumped at the invitation. She had several conference calls with the LDA steering committee and traveled to Indianapolis for meetings. The new location of Kids’ Kingdom, a riverfront park, was selected, and the mayor’s art commission approved the project.

The only thing left was getting what Johnson called a “rubber stamp” from the parks board. Kevin Morrissey, who had taken over Kannenberg’s duties on the steering committee, told Johnson that he would make the presentation.

Before talking to the parks board, Johnson wanted to solidify the cost estimates. Digging into the numbers, she discovered the original projection only included the cost of materials and construction of the monument. It did not include the cost of building the base on which it would rest or the labor.

Her estimate of the total cost reached $100,000. She brought the figures to the attention of Morrissey and the LDA class. Since then, she has reached out a couple more times to continue the conversation but has gotten no response.

“I’m not sure at this point if they’re still moving forward or if they’ve disbanded,” Johnson said.

Felts acknowledged the cost estimate for completing the project was several times more than what the LDA class had raised. Now the class has to consider a variety of alternatives, including doing a greatly scaled down version of the artwork or going to Shepard with an apology and asking for his ideas of what to do next. In addition, the LDA class could possibly return the contributions to the donors and walk away from the project.

Regardless of the final outcome, Felts said the project has still been successful because it has presented a learning opportunity to the class members.

“I’m not disappointed,” he said, “and I don’t think anybody at the state bar is disappointed.”•