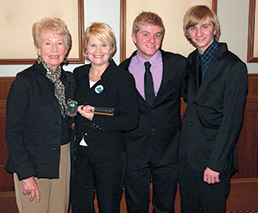 Kerry Hyatt Blomquist, center, is joined by her mother and sons Mike and Eric following her installation as Indianapolis Bar Association President in January 2013.

Judge Jane Magnus-Stinson of the U.S. District Court for the Southern District of Indiana wrote, “If you were to get out a Ouija board and ask Antoinette Dakin Leach herself whether she wanted to attach her name and legacy to a woman who has devoted her legal career to advancing women in the legal profession AND who has focused the better part of her legal practice to changing the law and culture so as to protect the safety and rights of women who are abused AND who was able to navigate the system and conduct herself in such a way that she was chosen as the president of the Indianapolis Bar Association, Antoinette herself would say: Kerry Hyatt Blomquist is most worthy.”

Kerry Hyatt Blomquist has served as General Counsel for the Indiana Coalition Against Domestic Violence (ICADV) since 2005. Prior to that, she served as a Title IV-D prosecutor in Shelby County, where she fought to ensure parents were receiving support to raise their children. Blomquist was also the original executive director of the Protective Order Pro Bono Project, which is now a nationally unique non-profit organization that provides civil legal assistance to low-income victims of domestic abuse.

In addition to her role at ICADV, Blomquist teaches at IU McKinney School of Law in the area of domestic violence and is a supporter of their Equal Justice Works Program, a loan forgiveness assistance program for lawyers who pursue a career in public interest. She was president of the IndyBar in 2013 and is an IBF Distinguished Fellow.

While her professional accomplishments stand out on paper, it would be an injustice to recognize Blomquist based on those alone. It is her “force of personality,” as Judge Magnus-Stinson wrote in her nomination, that gives Blomquist her highly regarded reputation as a courageous legal professional. Her “accomplishments are centered on her tireless advocacy on behalf of victims of domestic violence and her mission to educate judges, prosecutors, law enforcement and health care providers about this critical problem.”

Not only does she advocate for the victims, but she puts herself on the line to do so. Judge Magnus-Stinson writes, “Not infrequently, 5’ 1” Kerry Blomquist finds herself face-to-face with abusive men. Because of her commitment to her client and the cause, she stands eye-to-eye, toe-to-toe with them and gives not an inch. Not many of us have to exhibit what I will call physical courage in our jobs, but Kerry does.”

While many recognize Blomquist’s accomplishments and tenacity, she is hesitant to speak about them herself.

“This award blows me away because I am not a big hitter in this profession, but I am wholly happy with the choices I have made. I have really loved just about everything I have had the opportunity to do,” Blomquist said.

While she always found legal work interesting and challenging, she says her profession became personally transformative when she began the Protective Order Pro Bono Project through the IndyBar in 2001. “That’s when my profession became meaningful,” she said. “That was the missing dimension for me at the time and it made me a better lawyer, a better mother of young kids and a better person.”

While others are quick to point to Blomquist’s many professional advancements and initiatives when asked about her most important accomplishments, Blomquist answers that question in a very different way.

“No brainer: my two amazing sons, Mike and Eric. They are brilliant, kind, creative and funny as hell. And they get me.”

From her answer, it is clear that despite all of her professional aspirations and accomplishments, Blomquist remains true to her heart. Just as she has never lost sight of her mission to help victims of domestic violence and educate others about the issue, she has also kept her role as a mother a top priority. Throughout her career, Blomquist has always found a way to advance the cause closest to her heart while holding loved ones in her life even closer. All the while, she has managed to engage hundreds of volunteers across the state and touch hundreds of lives.

It certainly doesn’t take a Ouija board to see why Kerry Hyatt Blomquist is a worthy recipient of this year’s Antoinette Dakin Leach Award, and if Antoinette were here today, as Judge Magnus-Stinson said, she would be sure to agree.•