Indiana University Maurer School of Law Professor William Henderson is the nation’s most influential person in legal education, according to rankings appearing in the January 2015 edition of National Jurist magazine. IU announced the selection in a statement Thursday.

“Firmly in the intellectual category, (Henderson) is nothing if not consistent, speaking strongly for the need of serious reforms due to a changing legal market landscape,” the magazine said. “Few have been as committed to analyzing legal education and offering concepts for reform as (Henderson). He’s been writing for years, arguing that significant structural changes have changed the legal industry dramatically — and permanently.” 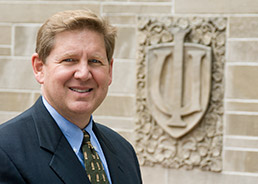 Henderson previously was ranked No. 2 on the list in 2013 and 2014. He supplants University of California Irvine School of Law Dean Erwin Chemerinsky in the top spot on the list of the 25 most influential people in legal education.

At the IU Maurer School of Law, Henderson, along with other faculty, introduced in 2009 a first-year course called The Legal Profession, an innovative four-hour required course that covers the ethics, competencies and economics of the legal profession. From 2009 until 2014, he served as director of the law school’s Center on the Global Legal Profession.

“The National Jurist’s ranking confirms what we in the legal education circle have known for years: that Bill Henderson is one of, if not the most, influential voices in the country when it comes to explaining and understanding changes occurring in large law firms and the legal profession,” said IU Maurer Dean Austen L. Parrish. “We are fortunate to have Bill here in Bloomington, where his insight and expertise have been invaluable.”

Shepard joined IU McKinney as a visiting professor after retiring in 2012 after 25 years as chief justice. He also chairs the Board of Advisors of the IU Public Policy Institute, part of the School of Public and Environmental Affairs at Indiana University-Purdue University Indianapolis, and co-chairs the institute’s “Thriving Communities, Thriving State” project. He was named to the National Jurist list last year, when he was ranked 21st.

The magazine said Shepard “continued his role as chair of the American Bar Association’s Task Force on the Future of Legal Education last year. The task force recommended some controversial changes, including amending accreditation standards that up the price of law schools. An innovator, Shepard was disappointed that the task force was unable to submit the recommendations to an ABA body on procedural grounds. Instead, he and others decided to push for the reforms personally.”

“I’m not at all surprised to learn that Justice Shepard has been named to this list for the second consecutive year,” Klein said. “He continues the work he began as chair of the ABA task force charged with examining legal education, pursuing the reforms the group recommended. We admire his commitment to the profession and are very proud that he is part of the McKinney Law family.”

Joining Henderson and Shepard on the list is former IU Maurer Dean Bryant Garth, dean emeritus of Southwestern Law School and professor at the University of California Irvine School of Law. Garth ranked 12th on this year’s list, up from 16th last year.