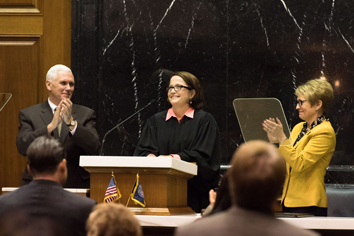 In her first State of Judiciary speech, Indiana Chief Justice Loretta Rush on Wednesday said the judiciary is “currently working on the development of a business court model focused on complex commercial litigation,” and urged the General Assembly to help fund the courts’ electronic filing initiative.

“We’re excited to roll out e-filing this year, and we’re asking for your assistance to make it successful,” Rush said in her first State of the Judiciary address.

Rush offered few details about the proposed business court. “Creating this specialty court will bring together judges experienced in handling business and commercial law cases to preside over a specialized docket with business-specific resources,” she said.

“Our goal in this endeavor, along with the introduction of electronic filing, is to promote an attractive, predictable and consistent climate for doing business in Indiana.

Supreme Court spokeswoman Kathryn Dolan said the court estimated the cost to run a statewide e-filing system is about $5 million, but the source of funding for the initiative hasn’t been identified. The state last year solicited bids for a statewide e-filing manager, but no formal selection has been announced.

“Your Indiana judiciary is strong,” Rush said, “and over the next year we will grow stronger still, taking on new initiatives to stay modern and responsive as we strive to fulfill the promise of justice in Indiana.”

While looking ahead at court modernization efforts, Rush also paid tribute to her predecessor. “In countless ways, the sound current state of our courts is attributable to former Chief Justice Brent Dickson – a man of integrity whose calm, civil and thoughtful approach was instrumental in leading our judiciary during the last several years – a period of much change.”

Dickson, who last year stepped down as chief but remains an associate justice, received the first of several standing ovations during Rush’s speech, not all of which were reserved for members of the judiciary.

Rush also told the story of Army Specialist Christopher Bunch, a veteran of the Iraq war who returned home with post-traumatic stress, anxiety, night terrors and drug and alcohol dependence due to his wartime experience. “Christopher said, ‘It took me five years to get into trouble.’”

But through a veterans court in Floyd County, he completed a VA substance-abuse treatment program, moved into transitional housing and a relapse prevention program and received mental-health treatment, all of which was paid for through his veteran benefits.

“Chris is once again a supportive partner to his wife, a role model for his sons and a productive member of his community,” Rush said in saluting Bunch. She said the 68 certified problem-solving courts in the state “continue to be one of our greatest success stories.”

Among other court programs Rush highlighted were those aimed at juveniles, such as the Juvenile Detention Alternatives Initiative, which now covers 56 percent of Indiana’s at-risk youth, and the Children’s Commission established last year.

She also noted creation of the nation’s first statewide Guardian Registry for adults who are subject to guardianships. The registry has been implemented in just a few counties to date.

“Rest assured, your Indiana judiciary is vibrant and ever poised to meet the challenges of the future,” Rush concluded.