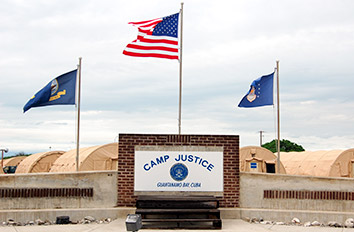 The U.S. Military Commission Observation Project overseen by Indiana University Robert H. McKinney School of Law is continuing to send individuals to watch and report on the accused terrorists’ trials being held at Guantanamo Bay. Blog posts and articles from the observers chronicle the glacial pace of the proceedings, the unexpected courtroom twists and the nagging constitutional questions.

The project regularly sends faculty, students and alumni to either Guantanamo Bay or Fort Meade in Maryland to observe the tribunals. Professor George Edwards, founder and director of the project, explained the work of the observers is not to address the political issues or comment on the substance of the military commissions.

“We’re interested in seeking to assess whether the stakeholders are receiving the rights and interests that are afforded to them,” Edwards said. “(Those rights) include the right to a fair hearing, the right to an independent tribunal, the right to trial without undue delay.”

He pointed out the observers also are looking at the stakes that the victims of the terrorists attacks and their families have in the proceedings. What about their rights to have access to the trials, to make statements, to confront and to have closure?

IU McKinney librarian Catherine Lemmer, who Edwards described as instrumental in helping to build the observation program, heard some victims’ voices when she traveled to Guantanamo Bay for the hearings of the alleged co-conspirators of the Sept. 11, 2001, attacks.

One man said he was attending the proceedings to remind the judge and attorneys that planes had flown into the twin towers of the World Trade Center and the Pentagon. A mother of a fallen firefighter said she was struggling to hang on to her opposition to the death penalty, but she believed the trials had to be fair because the United States would be judged by how it handles the detainees.

The project drew praise from panelists who participated in a recent forum at the law school examining the tribunals. Hosted by the Indiana International & Comparative Law Review, the symposium brought together legal scholars from IU McKinney and around the country to discuss whether the end is coming for Guantanamo Bay or if the practice of international criminal law has reached a turning point.

Two participants – Shahram Dana, associate professor at The John Marshall Law School and Chris Jenks, assistant professor at Southern Methodist University Dedman School of Law – on the second panel discussion both noted IU McKinney’s effort in documenting the proceedings at Guantanamo Bay is shining a light on America’s response to terrorism and will be an invaluable resource for history.

Lemmer advocates for the proceedings to be shown on C-SPAN. The American public should see for themselves, she said, so they form their own opinions. By seeing what is happening in that courtroom, she said it is easy to realize how things could go wrong.

“The role of the attorneys, our role (as citizens) is to hold fast to the Constitution when really bad things happen and everybody wants to step over it,” Lemmer said. “Ultimately, the price we pay for not doing it right is incredible. This is our Constitution and it is getting overwhelmed, which should not happen.”

Lemmer took her first trip to Guantanamo Bay in December 2014. However, the proceedings were derailed by the ongoing revelations that the Federal Bureau of Investigation may have infiltrated the defense teams. The FBI is accused of listening to defense attorneys’ meetings with their clients and reviewing their correspondence as well as attempting to turn legal team members into informants.

When she returned in early February 2015, the FBI conflict-of-interest issue was still being argued. Then unexpectedly, Ramzi Bin al-Shibh, one of the defendants in the courtroom, said he recognized his interpreter as someone he encountered during the period he was held at one of the Central Intelligence Agency’s secret prisons. Another defendant told his attorney he also remembered the interpreter from the black site.

“It became very surreal,” she said.

To Indianapolis defense attorney Richard Kammen, the confusion and conundrums that swirl around Guantanamo Bay could be resolved by moving the proceedings to federal court. Kammen, lead counsel for USS Cole bombing suspect Abd al-Rahmin al-Nashiri, pointed to the hearings of accused Boston Marathon bomber Dzhokhar Tsarnaev as an example that U.S. courts can handle high-profile terrorism cases.

“There’re so many more moving parts down there than there would be in federal court, so things just get more messed up,” he said.

Currently, Kammen and his defense team are tangling with the federal government to release the details of the treatment of al-Nashiri while he was kept in a black site. The release of the CIA Torture Report publicly confirmed that the defendant had been physically, psychologically and sexually tortured, but Kammen said the defense still needs details of what was done and when.

IU McKinney professor Lloyd “Tom” Wilson is scheduled to observe the al-Nashiri proceedings during his first trip to Guantanamo Bay. The task of watching and relaying what is happening will be difficult, he said, because he will be seeing just a snapshot of a long, complex and secretive process.

Wilson was careful in his preparation for the trip, not wanting to form any preconceived ideas or prejudices before he arrived in the courtroom. He is going out of a sense of civic duty and to understand the situation better than he does now. 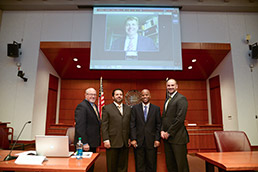 Still, the proceedings are not easy to comprehend and continue to spark debate many miles away from the detention camp.

As part of his remarks during the IU McKinney symposium, Kammen described Guantanamo Bay as a “law-free zone.”

Co-panelist Jenks countered that characterization, arguing traditional rules governing the treatment of prisoners of war have been upended by terrorism. In previous conflicts, nation states battled each other but now the United States is fighting against groups that are unconnected with any organized government or country. Even so, he continued, the detainees at Guantanamo Bay have a right to counsel and are being given a trial.

Kammen responded that even if his client is acquitted, he will not be released.