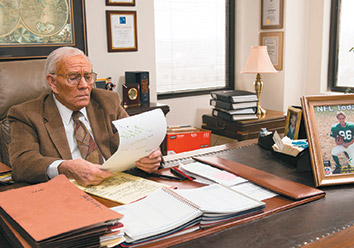 Once-frequent fights and legislative battles over contingency fees have dwindled almost to the point where the only mention of the payment arrangement exists in television commercials featuring attorneys proclaiming the client will not pay unless the case is won.

Tort reform skirmishes have shifted to extending immunity or implementing the so-called English Rule which requires the loser in the case pay all court costs. Today, plaintiffs’ attorneys shrug at questions about the contingency fee structure and say they see no problems.

But Indianapolis attorney Louis Buddy Yosha has a theory why the contingency fee front has quieted down – the business interests won.

Twenty-five years ago, Yosha wrote a two-part column in the Indiana Lawyer declaring the contingency fee system was under attack. He charged the insurance companies and other businesses were misrepresenting contingency fees and undermining some plaintiffs’ ability to get relief.

“The simple fact is that victims go to lawyers who represent them on a contingent fee basis because the insurance industry won’t pay anything close to the actual fair value of a claim, until they are compelled to do so,” Yosha wrote.

What has not changed in the past 25 years are the arguments for and against contingency fees. Proponents maintain the contingency fee system enables more people access to the courthouse. Opponents counter the system encourages frivolous lawsuits and raises insurance premiums as insurers are said to pass along the costs of large settlements to policyholders.

Yosha contends the system has been eroded with the introduction of caps limiting damage awards.

Attorneys may be more hesitant to take a personal injury case since the curbs on the monetary recovery could mean the resulting contingency fee will not cover the cost of the litigation, Yosha explained. And individuals with serious injuries are not getting the compensation they need to provide for their long-term care.

More importantly, he continued, the chipping away at the contingent fee system has limited access to the courtroom for many low- and middle-income individuals and families. People who do not have the financial means to pay an attorney by the hour rely on contingency fees to get their case litigated, he said.

Admitting he may be an outlier among defense attorneys, Robert Wagner, founding partner of Lewis Wagner LLP, agrees with the plaintiffs’ bar that the contingency fee system does provide more access.

Litigation can be expensive, he said, and without contingency fees, many people would not be able to sue. The fee structure has been around for a long time and while opposing sides argue about its effect, Wagner said he does not know of any system that could replace contingency fees.

However, Yosha said responsibility for enacting laws that have curbed the fee structure is in the Indiana Statehouse. Remembering when he began practicing in 1963, he said victims’ rights were not vigorous but they were more robust than they are now.

In the 1970s, the Indiana Legislature passed the Comparative Fault Act, Indiana Code 34-51-2, and the Medical Malpractice Act, I.C. 34-18, which placed caps on the amount of damages a plaintiff could recoup.

Comparative fault prohibits an individual who contributed 51 percent or more fault to the incident from collecting damages. Also, it enables a jury to determine what percentage of an accident was caused by the plaintiff and reduce the amount of the award by that percentage.

Indiana was the first state to institute medical malpractice caps which now limit damages to $1.25 million, although House Bill 1043 introduced this session seeks to increase the cap to $1.65 million for claims arising after June 30, 2015.

The punitive damages statute, I.C. 34-51-3, put a ceiling on the maximum award of punitive damages a plaintiff can collect to either three times the amount of the compensatory damages or $50,000, which ever is greater.

That statute was challenged in State v. Doe after a victim of childhood sexual abuse was awarded $150,000 in punitive damages in his lawsuit against Father Jonathan Stewart. Because of the damages limit, that award was cut to $50,000.

Marion Superior Judge David Dreyer ruled the statute violated the Indiana Constitution, but in 2013 the Indiana Supreme Court reversed, finding the Legislature has the power to set the cap.

A few years earlier, the Supreme Court handed down a landmark decision in Stanley v. Walker, 906 N.E.2d 852, 855 (Ind. 2009). The justices split 3-2 in finding that the discount on medical expenses negotiated between the insurance company and the health care provider could be considered by a jury without violating the collateral source evidence statute, I.C. 34-44-1.

The plaintiff, Danny Walker, had incurred $11,570 in medical bills following an auto accident with the defendant, Brandon Stanley. At trial, the defense sought to introduce evidence that an agreement between Walker’s health insurance company and the medical provider had reduced the bill to $6,820.

Although the collateral source evidence statute prohibits the introduction of insurance benefits in personal injury cases, a court majority ruled the law does not bar evidence of the discounted sum. The reasonable value of the medical treatment can be calculated by examining the actual amount paid and the amount originally billed, the justices held, so accepted charges are allowed to be introduced at trial without referencing insurance.

Attorneys Peter Palmer and Charles Vaughan Sr. illustrate the longevity of the contingency fee system. They were licensed 38 years apart and they practice in different parts of Indiana, but both say without contingency fees, many of their clients would not be able to pursue their cases.

“There is no justice at all without contingency fees,” said Vaughan, founding partner at Vaughan and Vaughan in Lafayette.

In practice since 1957, Vaughan estimated 90 percent of his clients did not have the money to pay for legal service on an hourly basis, but their cases had value, he said.

Palmer, partner at the New Albany firm of Palmer Thompson Law LLC, was admitted to the Indiana bar in 1995. He focuses his practice on complex medical malpractice with most of those cases continuing for three to five years and having expenses that exceed $100,000 in some instances.

The right to have an attorney is a founding principle of the United States and without contingency fees, a lot of people would lose that right, Palmer said. A change in the fee arrangement would hurt his practice, he concedes, but it would be more hurtful to his clients.•