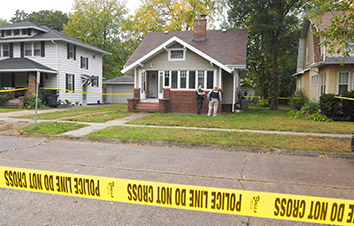 Seemingly on a whim, a group of Elkhart youths broke into a neighborhood home one October day in 2012 and ended up with a dead friend, criminal convictions and 45-year prison terms.

The young men – Blake Layman, Anthony Sharp, Jose Quiroz and Danzele Johnson – kicked open the backdoor of a house they thought was empty while their friend, Levi Sparks, stayed outside to watch for police. However, the homeowner was asleep upstairs and, after being awakened by the sound of the forced entry, he grabbed his gun and confronted the youths.

To frighten the intruders, the homeowner fired his handgun, but Johnson was hit and died at the scene from a gunshot wound. Quiroz pleaded guilty to felony murder and Layman, Sparks and Sharp were convicted of felony murder. All the juveniles have been dubbed the “Elkhart Four.”

The latter three youths made an unsuccessful appeal to the Indiana Court of Appeals and most recently argued before the Indiana Supreme Court to accept their petitions to transfer.

The 60-minute oral argument held Feb. 26 boiled down to the language of the statute versus legislative acquiescence.

Precedent was established with the Supreme Court’s affirmation of a felony murder conviction in Palmer v. State, 704 N.E.2d 124 (Ind. 1999). Jesse Palmer was convicted of felony murder after his friend, Robert Williams, was shot and killed by a correctional officer. The incident started when Palmer held a gun to an officer’s head and threatened to shoot if Williams was taken into custody for a drug violation. A struggle ensued and a fellow officer shot and killed Williams.

Justice Brent Dickson wrote the majority opinion and was joined by former Justices Myra Selby and Ted Boehm. The opinion held that the statutory language “kills another human being while committing” a particular felony does not limit the felony murder provision only to a situation where the felon is the killer. It also applies when the felon contributes to the death of any person.

However, former Justice Frank Sullivan, joined by retired Chief Justice Randall Shepard, dissented, arguing the court was stretching the statute beyond its intent. Under the terms of the statute, Palmer is not guilty of felony murder because he did not kill another person, they believed.

During her arguments, Wieneke maintained Palmer should be overruled. She said the plain language of the statute indicates the person who is committing the felony or the accomplice in the crime must do the killing to be guilty of felony murder.

Justice Robert Rucker pointed out she was making the same argument as the dissent in Palmer, which the majority had rejected. What has happened, he asked, that the court should say it made a mistake?

Wieneke responded the facts of the Elkhart case give the court reason to reconsider. The juveniles choose a home they thought was unoccupied and they did not directly confront the homeowner.

Justices Dickson and Steven David also questioned the defense on why the Legislature has not rewritten or amended the statute if the court’s interpretation was wrong. Wieneke contended the Legislature acts when a decision makes a splash but it did not act after Palmer because the case did not affect many people and did not generate much public attention.

“It could also be,” Dickson rebutted, “the Legislature finds there’s a very positive social policy served by Palmer because of its deterrent effect, because it sends out a sharp warning to not participate in any sort of a felony where there’s a risk that someone might be killed.”

“Your Honor, the sharper warning might be to actually write it into the statute so that people do know and do understand that that is illegal,” Wieneke countered.

McLean argued the language of the statute supports the interpretation that an individual can cause another’s death without actually being the one to kill. The wording, “who kills while committing,” indicates the person does the killing when committing a target felony that leads to the death of another.

“In addition to the plain language of the statute … the Legislature’s constant signaling to this court for almost 30 years has been, ‘Yes this is how we intend the statute to be interpreted,’” McLean said. “… our statute is not written to require only the defendant pull the trigger, our statute is written if death is foreseeable.”

McLean responded, “It does require an actus reus which is the commission of the target felonies.”

In its amicus curiae brief in support of transfer, the Indiana Public Defender Council reiterated the argument that the plain language of the statute does not allow for a felony murder conviction when someone other than the perpetrator kills.

Furthermore, the council pointed out that in other states that take a proximate cause approach like Indiana, the language has been incorporated in state statute and those laws clearly state the perpetrator can be found guilty of felony murder when another person causes the death.

The brief’s co-author, Indiana University Robert H. McKinney School of Law clinical professor Joel Schumm pointed out the Indiana Supreme Court has a “long cherished principle” of following the language of the state’s statutes. And in the case of the Elkhart Four, the statute does not apply because the defendants did not kill.

After the arguments, Indiana Attorney General Greg Zoeller’s office released a statement underscoring the Legislature’s acquiescence to the Supreme Court’s interpretation of the felony murder statute.

“… those who contend Indiana’s longstanding criminal statutes are too harsh should address their arguments to the legislative branch that makes the law,” Zoeller said.

Indianapolis criminal defense attorney Luther Garcia sees the felony murder statute as giving prosecutors a huge amount of leverage. Garcia is not part of the Elkhart Four case but, in his career, estimated he has participated in six felony murder trials.

“(Prosecutors) often charge felony murder in robbery cases because they can get more time than other felonies,” he said. “There is also a specific charge called robbery that results in death.”

The jury, Garcia said, was confused by the felony murder statute and because they could not reach a verdict, the state was given a second chance to try the case. The conviction and 60-year sentence were affirmed by the Court of Appeals in Glenn v. State of Indiana, 796 N.E.2d 322, 323-24 (Ind. Ct. App. 2003).

Garcia said he was very disappointed with the outcome. “Honestly, I don’t believe he had anything to do with the murder,” he said.

Dickson asked both Wieneke and McLean what happens next if the court overturns the convictions. Both attorneys said because the jury did not return a verdict on the burglary charge, the defendants would likely be tried for that offense. •