Home » IndyBar: Turtlenecks, the New England Patriots & What That Tattoo Says About Your Client 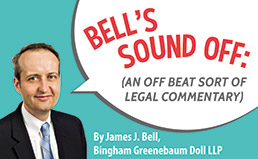 Sometime in 2002, when I was still a public defender, I discovered that I was the only one in the courtroom without one. During a break from the hearing, I noticed that the prosecutor had one (a rose inked to her ankle,) my client had one (his ex-wife’s—not his current wife’s—name inscribed on his arm) and the judge had the majority of her body covered by a black robe (which I thought was a little too convenient). After this, I started seeing tattoos everywhere. Especially in the courthouse.

But these courthouse tattoos never told me much about people’s past deeds. Sure, there were the occasional tattoos I would see that told me “that guy was in the Navy” or that “she used to go to Dead shows.” But those ones were rare. Most tattoos I saw in the City-County Building merely told me that there were loose standards for what qualified as proper courtroom attire and that a lot of defendants believed their lower backs were blank canvases for which a painting was needed.

I should add that, as a public defender, I never had a tattoo become evidence in a case. That is, I never walked into the Marion County Jail and met a guy with a tattoo like the one pictured with this article. 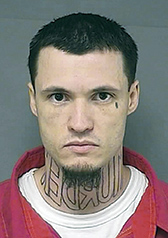 This “MURDER” neck tattoo was what greeted Jeffrey Chapman’s lawyer when he first met his client to defend him in… get this…a “MURDER” case. After first witnessing this tattoo, the attorney-client conversation that then ensued was, of course, confidential. But we can imagine that Mr. Chapman’s lawyer likely asked his new client whether he had a “NOT GUILTY” tattoo anywhere on his body to help cancel out the jury effect of the neck tattoo.

According to news reports, this tattoo became a hot legal issue when Mr. Chapman’s counsel, believing the tattoo was unduly prejudicial, filed a motion requesting a limiting instruction that would permit the jury to see the tattoo, but would order the jury not to consider the tattoo in weighing guilt or innocence. Legally speaking, the jury would be required to “unsee” the tattoo.

Just kidding. A motion like that would reek of “thinking like a lawyer.” Instead, Chapman’s lawyer simply got the judge to allow his client to wear a turtleneck in front of the jury. Issue closed. Matlock couldn’t have handled it any better.

There was at least one other tattoo-case that received publicity over the past year. If you recall, deflated footballs were not the only recent cause for concern for the New England Patriots. More serious than Spy-gate, Deflate-gate, steroids, sign stealing, terrible hoodies and even Gisele’s inability to decide on one haircut for her husband were the murder accusations against one of the team’s tight ends, Aaron Hernandez.

It does not appear from media reports that Hernandez’s tattoos have been used against him at his current murder trial, and donning a turtleneck to cover a defendant’s neck doesn’t tell us much about an application of the Rules of Evidence. So what do courts do when a tattoo becomes an issue at trial?

The Seventh Circuit recently had an opportunity to discuss the issue of tattoos in a felon in possession of a firearm case. In that case, the defendant testified, “I don’t mess with weapons,” and this testimony caused the U.S. Attorney to ask the defendant: “Well, if you don’t like guns so much, why do you have a tattoo of one up there on your neck?” –United States v. Boswell, 772 F.3d 469, 473 (7th Cir. 2014).

Good question. According to the record, the defendant did have a tattoo of a revolver on his neck (and apparently, no turtleneck in his wardrobe.) The defendant responded by testifying that the tattoos were “part of a western thing with cards, poker and dice” and that he liked to “gamble.” Id. This Seventh Circuit concluded that the “I don’t mess with guns” testimony was “not without risk” and that testimony “opened the door” to cross-examination on the tattoo. Id.

So the Seventh Circuit has held that the government can’t use tattoos as propensity evidence. And that makes sense. It’s similar to how the government can’t prove a charged crime by demonstrating that the defendant has committed the same crime in the past. After all, just because you get a gun tattoo on your neck in 2008, it doesn’t mean that you possessed a gun illegally in 2015. Similarly, if you have a marijuana leaf tattooed on your shoulder, it doesn’t mean that you ever smoked…oh, who am I kidding?

But when you’re charged with murder and have a “MURDER” tattoo, should that be different? Doesn’t that tattoo say something? Especially when it is displayed prominently on the defendant’s neck? But I guess that’s the point. The admissibility of that tattoo depends on the purpose of the proffered evidence or stated another way, it depends on what that something is.

The Seventh Circuit stated that “it may well be impossible to ascertain an individual’s motive or reasons for getting any particular image memorialized on his or her skin.” Boswell, 772 F.3d at 476. On the flipside, it may be impossible for me to tell you my reason for not getting a tattoo. I don’t know why. I just never got one. But now that I know that tattoos are linked to horrible things like the New England Patriots, I’m really glad I never got one.

And that’s not to say that all tattoos are bad. If you want a tattoo and you really trust the tattoo artist that those Chinese or Japanese characters you’re about to put on your back really say “Peace,” then knock yourself out. But if you’re going to get a tattoo, proceed with caution and choose your message carefully. Because whatever message that tattoo will send, it will send it permanently.

Former Louisiana Gov. Earl Long was once credited with saying, “Don’t write anything you can phone. Don’t phone anything you can talk.” He then advised us not to “whisper,” “smile” or “nod” if we could “wink.” If Gov. Long were alive today, he might add, “And never get a tattoo.” Or at least he might think about the permanency of the tattoo and advise us not to “tattoo anything you can’t hide with a turtleneck.”•