Portage attorney Greg Sarkisian remembers a time when trying to convince a jury how a crash happened involved moving magnetic cars around on a board.

Now, he said, “You can do these fantastic animations that give the jury a visual impression of how the impact took place.” The videos enhance what jurors remember about the crash and reduce the amount of explanation an attorney has to do, he said.

In the earliest editions of Indiana Lawyer, the newfangled technology of video accident reconstruction was featured, though what was state-of-the-art 25 years ago left much to the imagination. The graphics were decidedly Lego-like in appearance, and the productions resembled video games of the day. While they may have been accurate, they weren’t necessarily persuasive. 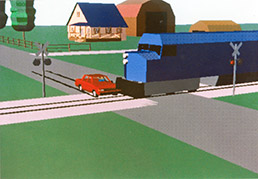 A car-train accident reconstruction video in the early 1990s (above) versus a video from today (below), which includes crash scene video and a realistic simulation of an oncoming train. (File photo)

“Not a lot of people relate too well to seeing a couple of boxes moving across a screen,” said Jim Casassa, vice president of engineering at Wolf Technical Services in Indianapolis.

“It does feel like it’s so real, and for that reason it really is a powerful piece of evidence,” Winingham said.

Tim Maher, a demonstrative evidence developer at Wolf, has been working on accident reconstruction videos for more than two decades. He said the science and presentation have evolved to the point that video simulations are almost indistinguishable from actual crash video.

When the company produces crash reconstructions it calls HyperVideo, crews go to an accident site and equip a vehicle with cameras to record the scene a driver would have experienced, precisely replicating conditions such as speed and direction of travel. Then, computer-generated video simulating the approach of the other vehicle involved in the accident is added to recreate the seconds leading to impact.

“It helps provide additional realism, and it also helps admissibility issues,” Maher said. “Opposed to the scene being 100 percent computer generated, no one can argue what you’re recording isn’t actually real and accurate, as long as the computer-generated part of it is correct.”

Sarkisian said the videos in some cases can give jurors an idea of how a person was injured and what happened to the body in a crash. “It places the juror inside the car, at the scene,” in the seconds before impact.

Twenty-five years ago, primary investigative resources were eyewitness accounts, police reports, and crash scene investigation. Those still are fundamental, but they might take a back seat to so-called black boxes in most cars on the road today. Casassa said any car with an airbag also should have some kind of data recorder.

“In 25 years, the onboard electronics of vehicles has become a very important piece of evidence-gathering,” he said.

Electronic control modules give crash reconstructionists a trove of data that usually includes information on speed, acceleration, braking and seat belt use before a wreck. Depending on the vehicle, data also may be available on steering, engine RPMs and other factors, and Casassa said heavy vehicles typically have modules that provide much more data.

Casassa confesses he’s seen a few reconstructions that resemble cartoons and might not stand up to rigorous scrutiny.

“One thing has not changed,” he said. “What you depict needs to be accurate from the standpoint of physics.”

Winingham said judges are discerning about what is scientifically reliable and tend to exercise control to make sure the videos replicate events as they happened. But there’s little debate on the accuracy of the software most reconstructionists use.

“By the time a computer animation makes its way into evidence, it’s hard to argue it’s not scientifically reliable,” he said.

“The threshold reliability has to be established through the method used by the forensic firm or the person who does the recreation,” Sarkisian said. “You have to persuade somebody it’s fairly exact to what happened.”

Maher said when an accident involves two or more vehicles each equipped with black-box devices, reconstructionists can render computer-generated video images extrapolated from data exported from the modules.

“Those systems have advanced a lot in terms of usefulness and admissibility into court,” Maher said, and the data from those units can be used to validate a reconstruction.

The impression videos make on jurors works on a level beyond just seeing a convincing crash reconstruction, Sarkisian said.

“I think the psychological benefit is whenever a lawyer explains something to a jury, they may feel he’s going to slant it or use words that advocate for his client’s position, but when they see (the video), no one’s speaking to them. They’re making all the decisions. It empowers them more,” he said.

Winingham’s firm often uses videos for focus groups and mock jury work to evaluate cases, and the compelling nature of the videos is clear. “Sometimes the animation is the best way to explain what happened,” he said.

Even though the videos may prove persuasive to jurors or those weighing the value of a case, reconstructionists also still rely on the time-worn investigative techniques including inspection of the road surface after a crash and the debris left behind.

But crash reconstruction videos are more persuasive than ever, Sarkisian said. “We use them whenever we can.”•