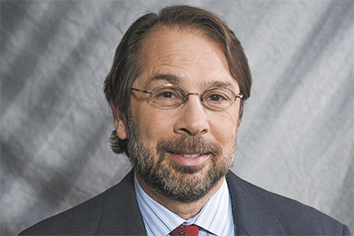 The Indianapolis skyline has grown because of attorney Zeff Weiss’ involvement in a multitude of significant and high-profile projects, including the development of Lucas Oil Stadium and CityWay. The Ice Miller attorney died Nov. 17, 2014, at age 57, after a battle with brain cancer.

Zeff, who worked as an accountant before becoming an attorney, spent his legal career at Ice Miller where he concentrated his practice in real estate. An experienced and highly skilled attorney, Zeff led the firm’s real estate group for many years.

He served as a terrific mentor to new attorneys. One mentee, Ice Miller attorney Matthew G. DeLaruelle, said Zeff was always willing to let associates take on as much responsibility as they were ready to accept, but was also there to patiently answer questions and ensure that the work was getting done promptly and properly. Zeff took the time to make sure the young associates understood the bigger picture.“He was one of the busiest people I’ve ever known”, Matt recalled, “but also one of the most generous with his time.”

And his tireless work ethic and professionalism earned him the respect of his peers. Zeff was a great client advocate and always showed respect and humility to his adversaries. He made his clients feel special and his adversaries wish he was representing them.

Perhaps a testament to Zeff’s impact as a lawyer is that one of his four children is a practicing attorney and two are currently in law school.

Zeff is remembered as a man who made time for his clients during complicated negotiations, for his colleagues when they needed to talk an issue over, for his family and friends, and for service to his community.

Benesch partner and 2014 IndyBar president Jeff Abrams, in a column to Indianapolis Bar Association members, expressed a sentiment many in the legal profession feel.

“A lot of us will miss the civility that he displayed to his fellow attorneys in artfully advocating for his client, yet despite the vigorous negotiations, he knew the ultimate goal was to achieve success for all parties by closing a transaction. I hope that other seasoned attorneys follow in his footsteps … where civility is a high priority and practicing law with respect and humility is the golden rule.”Zeff served on the executive committee of the board of directors of the Jewish Federation of Greater Indianapolis Inc., was a past-president and board member of Park Regency, and a board member of the Indianapolis Public Library Foundation. Longtime friend and IU Maurer law school classmate Lauren Robel, provost and executive vice president at Indiana University, remembered Zeff, saying, “In an era when lawyers are constantly under attack and suspicion, Zeff’s funeral was standing room only. This is because of the care, dedication, and integrity with which he approached his life and his work.”