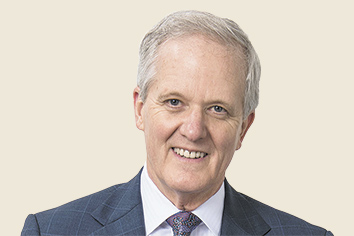 Mike Hebenstreit – as a lawyer and a person – embodies the “lawyer as a leader” attitude. The general practitioner mentors young lawyers and encourages their involvement in the profession as well as their ethical approach to clients and to each other. He is a leader in the bankruptcy bar and a former president of the Indianapolis Bar Association, where his visionary leadership has had a positive and sustaining impact on the many attorneys who he has served over the years. Mike has earned a strong reputation for his bankruptcy work and as a bankruptcy panel trustee. He makes pro bono work a constant of his law practice, having at least one pro bono client at all times.

You used to practice in a firm with your wife. Any tips for working with family members?

When Robyn and I worked together, we had young children. Work stayed at the office and it was family time at home. Additionally, since both of us were lawyers, we were of equal status which eliminated issues that sometimes could arise if a spouse was the lawyer and the other a staff person.

Strangely enough, I am a true general practitioner. My first job out of law school was working for Indianapolis Morris Plan Corporation when the Bankruptcy Code of 1978 was enacted. Through that job I learned a good bit about bankruptcy that has served me well over the years. After I opened my first office, I took virtually anything and still have a wide variety of civil cases involving family law, probate and real estate. I love the variety as it creates a broad base of knowledge and keeps the practice lively.

Why is it important for attorneys to be involved with their local bar association?

Luck. There had never been any lawyers in our family so I did not have any role models. When I graduated from college, I thought an advanced degree would be helpful and being a lawyer seemed like a great option. It certainly has been.

Hands down it was working as a waiter at TGI Fridays at the old Bazaar at Keystone at the Crossing. I worked there while I was in law school, and it was one of the best jobs I have ever had. It was fast paced, economically rewarding, and allowed me to meet a number of interesting people, many of whom are friends and clients to this day.

I certainly have no regrets how my career has progressed, however if I had it to do over again, I wish someone would have suggested applying to colleges and law schools outside of the Midwest. Many things are possible if you know they exist and make the effort to apply. Having no role models at that time, my scope was rather limited.

After I was first admitted, I made a conscious effort to observe and study the “older lawyers” both in the courtroom and their general practices. It seemed like I was constantly in the courthouse or meetings with clients and other lawyers. Now business is frequently conducted by email. While it is certainly efficient, it eliminates the personal touch.

I have read quite a bit about how cutthroat the practice of law has become and how nasty attorneys are to each other. I have really not experienced that on a personal level. When I first started practicing, lawyers communicated in person, by letter or by telephone. When you knew you were going to see that other lawyer in the courthouse on other cases, it encouraged respect and civility. Today, it is very easy to hit the “send” button on an email when the sender would not have spoken that same message if engaged in a face-to-face meeting or a telephone call.

Mentoring younger attorneys is beneficial for them, but what do you learn about yourself or the practice of law when you take on a mentoring role?

I realize how lucky I have been. I learned from a number of fabulous mentors, and I hope I have been able to help young lawyers both establish and develop their careers as this is what makes all of us better at our profession.