Home » Jury is out on Indiana Tax Court

Indiana’s Tax Court routinely takes years to decide disputes that arrive only after meandering through local and state revenue agencies. And in some cases, those agencies have already spent years reviewing the complex tax appeals. A few cases decided by the Tax Court this year involved disputes dating to 2007.

But relief may be on the way for weary litigants. The Indiana Supreme Court on April 20 appointed a task force to study the work volume, operations and performance of Indiana’s Tax Court, created in 1986 by the Legislature to remove these intricate cases from state trial courts.

Court of Appeals Judge James S. Kirsch chairs the task force that’s taking a hard look at Tax Court and acknowledges hearing complaints from members of the bar about the time the court takes to rule.

“Improvement is what is needed,” Kirsch said. “At this point I don’t know that anyone is contemplating fundamental change, but we don’t know what the recommendations are going to be. … It’s premature to take anything off the table.”

Tax Court Judge Martha Blood Wentworth said, “I’m 1,000 percent in favor of doing this,” noting it’s the first time in the court’s history that such an evaluation is being undertaken. “We’re also looking to see what’s right for this state, and it’s the right timing to do it right now.”

Appointment of the task force coincides with a similar act in the General Assembly to study Tax Court that Kirsch expects will align with the task force he’s chairing. Senate Enrolled Act 423 contains a provision for the Indiana Judicial Center to study the backlog of Tax Court cases and make recommendations by the end of next year.

Calls for review of the court come as its case backlog hovers near a 10-year high. Rules for the court amended effective Jan. 1 included new language stating “the court shall issue decisions promptly after taking issues under advisement.”

Kirsch said drawing benchmarks for case management will be a major focus for the task force. “Tax Court never had a standard from its inception” on how long cases should take for disposition, he said.

“I think that everything is on the table about benchmarking and whether or not we have metrics that we follow here,” Wentworth said. A goal is to reduce to six months the average time between when cases are taken under advisement and when a ruling is issued. She said the current time of less than two years was “very unacceptable.”

Wentworth said clerks continue to generate draft opinions on average six weeks after a case is taken under advisement. She said that’s the same benchmark that was in place when she clerked for former Tax Court Judge Thomas G. Fisher before he retired to senior status. Fisher continues to preside in some cases before the court.

Wentworth said members of the bar have proposed some possible ways to streamline cases. One possibility is establishment of a small docket comparable to that of the United States Tax Court. This could reduce discovery and the court’s work product in those cases.

The statute that created the Tax Court gives it exclusive jurisdiction over any case that arises under the tax laws of Indiana, but those cases have piled up.

A review of the five most recent Tax Court opinions as of April 29 lends weight to criticism of delays litigants encounter awaiting rulings from the court. The five cases reviewed took on average 32.2 months from filing to disposition. None of the cases were decided in less than 24 months.

Skewing that average, though, was a case a Michigan City casino filed seeking reimbursement of more than $300,000 in innkeeper tax collected on hotel rooms that were provided at no charge to guests. That case took 55 months from filing to decision, with the Tax Court ultimately determining it lacked subject matter jurisdiction. 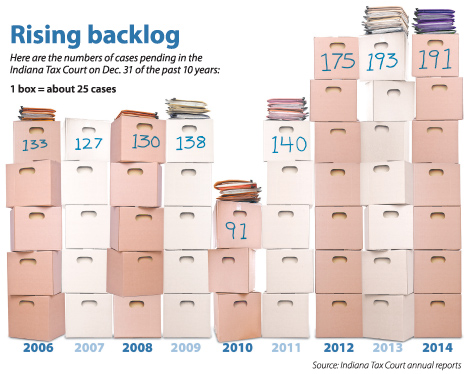 Faegre Baker Daniels LLP partner Stephen H. Paul represented Blue Chip Casino before the Tax Court and said he believed the case was fairly clear cut. He argues innkeeper taxes on the rooms in dispute were paid in error because the innkeeper tax is piggy-backed on sales tax. Because the casino didn’t charge for the rooms, he said, no sale occurred, no tax should have been paid, and the casino is due a refund.

But in the long procedural history dating to 2008, the Indiana Department of Revenue denied the claim and referred the matter to the LaPorte County treasurer. That office did not respond to Blue Chip’s refund requests, so the casino appealed to the Tax Court.

“No one wants jurisdiction on this,” Paul said.

Paul said the court’s opinion in Blue Chip Casino, LLC v. LaPorte County Treasurer, and LaPorte County Convention & Visitors Bureau, 49T10-1008-TA-37, was a bit surprising after such a protracted delay. The court held a hearing on the matter on May 4, 2012, but didn’t rule for almost three years.

“We’ve asked for a rehearing,” Paul said. “We believe the Tax Court does have jurisdiction, and we’re going to explain why at the rehearing.”

Still, Paul understands why the court has a backlog. “The court’s caseload is significant, and I don’t believe the court has enough support in the form of law clerks to timely deliver opinions,” he said. “It’s a problem, and the Supreme Court thinks it’s a problem.”

Paul is a founding member and current president of American Property Tax Counsel, an organization of leading tax attorneys in the United States and Canada. He said despite the problems, “Indiana’s Tax Court has an absolutely stellar reputation throughout the United States. We have one of the most highly regarded tax courts in the country.”

Wentworth is getting some help in the next budget cycle, having made her case to the General Assembly for additional help. The court currently has two clerks and a staff attorney. The recently passed budget provides an additional $279,393 for personal services over the next two fiscal years.

“The purpose of the Tax Court is to have a court with tax expertise with one place people can go and have a tax expert look at the case and set a body of law,” she said. “It’s a good thing for everybody to have that.”•