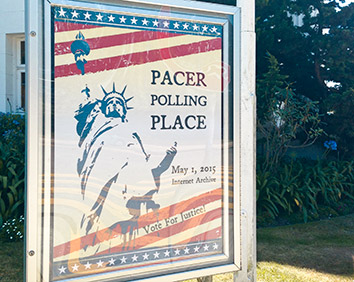 On May 1, protestors across the country launched their ire on the federal judicial branch. They were not maligning the judges or their decisions, but rather they were imploring the courts to upgrade and improve the online Public Access to Court Electronic Records system.

People protested the clunky, cumbersome nature of the 27-year-old electronic database of federal court filings that draws little notice from the general public, along with the fees that are charged to access most of its documents.

The California-based advocacy group Public.Resource.Org, led by Carl Malamud, organized the event. It set up tables at courthouses in major cities including San Francisco, New York and Chicago, home of the 7th Circuit Court of Appeals. Citizens were encouraged to take a few minutes to write a postcard to the federal judiciary, asking for a reform of PACER.

A sampling of the messages showed many protestors asked the federal judges to give the courts more transparency. Removing or reducing the fees, many wrote, would open the courts and enable citizens to learn about the justice system. 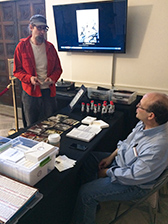 PACER postcard pleas did not take place in Indiana, but the system does incite a range of reaction here.

A common complaint is the limited search capabilities the online database allows. Without the name of a party or attorney, or the case number, locating a particular lawsuit can be nearly impossible.

“(PACER) screams to me that it is designed for attorneys who practice in federal court,” said Benjamin Keele, librarian at Indiana University Robert H. McKinney School of Law’s Ruth Lilly Law Library.

He pointed to the “Public Access” in the system’s name and said the database is “not well-designed for non-attorneys and, I would even argue, not easy for attorneys who do not practice in federal court. I find it very frustrating to use.”

The topic of fees also arises when talking to the Indiana legal community about the online system. However, the views are more nuanced with some acknowledging the charges can accrue quickly while at the same time conceding the judiciary needs the money.

“I recognize the argument that these are public courts with public documents and that ordinary citizens ought to be able to review and investigate, but there is a cost in maintaining the system,” said Brian Paul, appellate attorney at Ice Miller LLP. “The cost for maintenance has to be paid for whether through access fees or filing fees.”

Malamud’s battle against PACER did not start with the national protest. 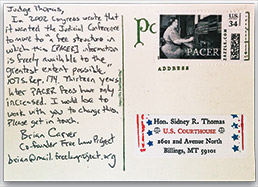 A sample of the postcards filed during the National Day of PACER Protest. The writers sent messages to the federal judiciary, asking that the public be allowed to view District and Circuit court filings at no charge. (Photo courtesy of Public.Resource.org)

The advocate has been fighting since 2008 when he discovered personal information was not being consistently redacted from documents. In an audit of filings posted online from 32 District courts, he found 1,669 records with private data like Social Security numbers, birth dates, home addresses and medical diagnosis on individuals named in the materials.

He is now pushing for a fee exemption that would provide his organization with a year’s access to the filings in the 9th Circuit Court of Appeals and its District courts of Idaho, Nevada and Oregon as well as the Western District of Washington.

Malamud says he wants access to the files so he can do a comprehensive analysis of the privacy violations in court records that are available on PACER. Then, after he completes the project and the court removes the identifiers, he wants to transfer the documents to the Internet Archive where they will be available to the general public at no charge.

Anticipating the court administration would not want to lose revenue by letting the records go public, Malamud says his project would actually help the judiciary. It would enable the courts to see the effects of providing broader public access to PACER for non-commercial uses. 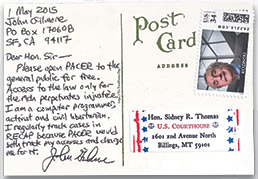 A sample of the postcards filed during the National Day of PACER Protest. (Photo courtesy of Public.Resource.org)

Keele would like to see the Administrative Office of the U.S. Courts, which oversees PACER, allow nonprofits to bulk download documents from the system. Over time, he said, PACER has not kept up with technological advances and adopted new capabilities. Nonprofit or other private entities could fill the void by downloading large amounts of data then converting the large files into usable databases that would enable broad research.

Being able to search across court documents could yield interesting insights into how the federal judiciary works and how lawyers practice, he said. Analyzing judicial opinions and the docket could spotlight what trends have been developing in the courts.

Under the current PACER system, Keele noted that such research would require a great deal of time and would likely be cost-prohibitive.

Scrapping PACER altogether would be difficult, Keele said, namely because it is the infrastructure upon which other databases like Westlaw and Bloomberg Law rely to retrieve federal court filings. 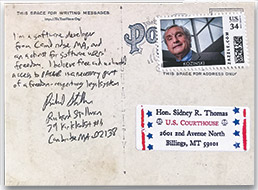 A sample of the postcards filed during the National Day of PACER Protest. (Photo courtesy of Public.Resource.org)

Still, he said, the public should be able to access PACER without being nickel and dimed. Individuals are charged just to look at the docket, and they can inadvertently spend a lot of money as they read through the materials.

Fees are largely what inspired Malamud to organize the PACER protest.

United States Chief Justice John Roberts touted PACER in his 2014 year-end report on the federal judiciary, championing the system as giving people all over the country instant access to court filings for a “modest user fee.” That prompted Malamud to write a 61-paragraph “appeal” that he posted online which details his encounters with PACER and rails against the monetary charges.

“I don’t think (the courts) should be charging a fee for getting into the federal courtrooms,” Malamud told the Indiana Lawyer. The documents are “too important to place behind a 10-cents-per-page paywall.”

Paul described PACER as “relatively inexpensive and relatively easy to use.” The Ice Miller partner largely limits his use of the system to review current appeals and look at the briefs to get a flavor of the arguments.

Any charges he accumulates is passed on to the client. He does not think his clients would balk at having to pay a higher filing fee, which is being advocated by Malamud as a way for the courts to recoup revenue that could be lost by making PACER free.

“I think it would have almost no impact on our willingness to file an appeal,” Paul said. However, he noted, increasing the cost to file a complaint might be a barrier to the very people for whom Malamud is trying to get access.

Indiana Legal Services Inc. attorney John Brengle agreed with Paul. Having used PACER for bankruptcies since 2001, he has found the system to be useful and the cost to be modest.

Still, he would like the database to give individuals the ability to view single pages of a document. When he wants to check one bankruptcy schedule, he has to pull the entire set of schedules for $3. Later, if he needs to review a different schedule, he incurs another $3.

Malamud’s PACER protest garnered a “couple hundred” postcards which he is preparing to mail to the respective judges. Although he is uncertain whether another protest will be held next year, he thinks the federal judges will be impressed by the handwritten messages.•