How long heirs have to initiate an action arising from an attorney-in-fact’s final accounting of an estate has been an open question in Indiana, but a recent change in state law settles it. Mostly.

Among a raft of changes to estate and probate law, Senate Enrolled Act 355, which takes effect July 1, will limit challenges to two years after heirs have received an estate’s final accounting. That won’t apply, however, where there are instances of fraud or misrepresentation.

Vincennes attorney Jeffrey B. Kolb chairs the Indiana State Bar Association’s probate, trust and real property review committee that recommends legislation. He said the protections the new law extends to those exercising power of attorney are the most significant changes among the many enacted by SEA 355, which cleared the General Assembly with broad bipartisan support.

Kolb said current law affords attorneys-in-fact no defined protections should an heir have a bone to pick with an estate settlement as long as 10 years later. The new language, which limits claims to two years after the accounting, “is intended to let an attorney-in-fact off the hook for the accounting, but in such a way it protects the rights,” of interested parties, he said.

The new law also provides attorneys-in-fact a proactive process by which they can go before a judge and have a final accounting approved. Under I.C. 30-5-6-4.1, an attorney-in-fact may seek judicial review and settlement even if no accounting has been requested by an interested party. 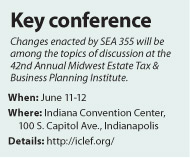 This sets up a hearing in which anyone with a stake in the estate must be properly served with the petition to settle the estate and notice of the hearing. If there are objections, Kolb said, a judge would rule on them and determine whether to approve the accounting.

If the court approves the accounting, claims are barred unless there is a showing of fraud, misrepresentation, inadequate disclosure or a failure to notify an interested party.

“It’s something most attorneys are going to need to know about right away,” Kolb said of the changes concerning final accounting. Of the statutory changes made in SEA 355, he said those are the most substantive and likeliest for estate attorneys to encounter in their practices. Kolb will be presenting a session on these updates and other recent developments in Indiana estate and probate law at the Midwest Estate Tax & Business Planning Institute on June 11-12 in Indianapolis.

Merrillville attorney Jim Martin, who also serves on the ISBA’s probate review committee, said the judicial review procedure would be useful for attorneys-in-fact who wish to settle an accounting but don’t want to wait for challenges that may arise. 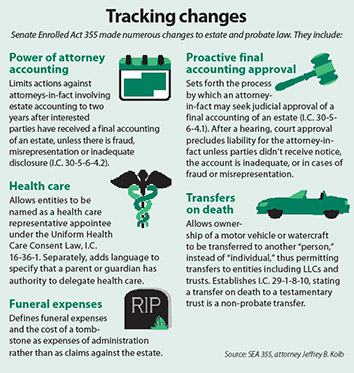 “The idea is, it’s a proactive step when you don’t want to be swinging in the wind for a long time,” Martin said. “If anyone’s got a beef with (an accounting), let’s just expose it right now.”

Martin agrees those provisions are the most profound and far-reaching changes resulting from the bill. But he also points to new language that clarifies several transfer-on-death issues.

For instance, changing the word “individual” to “person” in the statute clarifies that motor vehicles and watercraft may be transferred to a trust, limited liability corporation or other entity, Martin said. The Bureau of Motor Vehicles has been reluctant to allow a trust or business, for example, to be listed as the beneficiary of a vehicle, he explained.

The bill also resolves what Kolb said is confusion over whether a transfer on death to a testamentary trust is subject to probate or non-probate claims. The bill establishes a new clarifying statute, I.C. 29-1-8-10, which says these are non-probate transfers subject to claims under I.C. 32-17-13.

Martin said another change clears up some confusion regarding funeral expenses. When the new law takes effect, those charges will no longer be considered claims, but rather expenses of administration of an estate. Kolb said this will give higher priority to the payment of those expenses.

The significant changes for attorneys-in-fact will bring some finality to the settlement of estates, but Kolb acknowledged concerns that linger even after current power-of-attorney statutes have been on the books for 24 years.

“Every year, more and more people are aware (appointing a power of attorney) saves time, it saves money,” Kolb said. “More people are also aware of how to abuse it.”

Because estates rarely involve simple addition and subtraction before the final accounting zeroes out, he said, disputes arising between principals and attorneys-in-fact are common.

“Where the attorney role comes in is in making sure the principal knows this is a very powerful document. If you give it to someone, it makes it very easy to steal your property,” Kolb said. He likened the trust placed in a POA to handing someone your car keys to go to the store for a loaf of bread.

“There is in Indiana a presumption of undue influence and fraud if you have a power of attorney,” he said. “There are safeguards in place. … It doesn’t stop the initial illegal act, but it helps to get the money back.”•