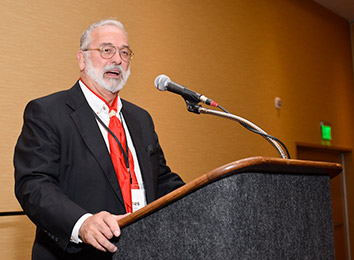 James O. McDonald of Terre Haute has represented plaintiffs for more than four decades, and now the lawyer represents the state’s plaintiffs’ bar as president of the Indiana Trial Lawyers Association.

McDonald’s one-year term began in May. During a wide-ranging interview, McDonald weighed in on topics from fighting for courtroom access to raising longhorn cattle.

On his hopes for ITLA in the year ahead

“Probably the single most important thing to me is trying to continue the outstanding work Steve Langer did as president,” McDonald said. “What has always been my focus is keeping the courts open in Indiana to citizens of Indiana who are injured and whose property is injured by the negligent acts of others.”

On the state of the ITLA

McDonald said the organization is as strong as ever, which is in contrast to trial lawyer associations in other states. He believes that is a result of the organization’s commitment to continuing legal education and writing amicus briefs to the Court of Appeals and Indiana Supreme Court on matters of significant interest.

Much of the work, particularly amicus filings, wouldn’t get done without the contribution of members who are willing to volunteer their time, he said.

“Many of the things members are most concerned about is it appears we’re seeing a constant drumbeat attempt to disenfranchise injured Hoosiers,” he said. This often comes in the form of bills in the General Assembly that would extend immunity to certain groups or cap damages from certain types of lawsuits.

Doing so, he said, has the unintended consequence of shifting health care, welfare and other costs to taxpayers when an injured person can’t seek adequate compensation for an injury.

On how farming impacts his work as an attorney

McDonald, 68, and his wife of 40 years, Vicki, have 32 head of Texas Longhorn cattle on their farm near the Illinois line west of the Wabash River in Vigo County. They share their 300-acre spread (most set aside for conservation) with quarter horses and Llewellin Setters.

“I think it’s great because it allows the mind to refresh and the body to refresh, and from the standpoint of gaining through the years confidence to be able to do things on your own.” McDonald told of once attempting to build a pond on the farm, but the dam walls were washed away by a heavy rain. He had better luck the next time. “There’s a great thing about learning from your mistakes,” he said. “They’re great teachers.”

On dressing for court

McDonald has argued more than 60 cases in Indiana appellate courts, often in cowboy boots and his trademark scarf tie. “I have had a couple of judges make a comment and they wanted to know if it’s a tie, and I said, yes, it was a Western tie,” he said.

“It’s more comfortable than a traditional tie, it’s much easier to clean, and it’s more versatile,” he said, adding he also can easily clean his glasses with the scarf tie. “I’m cheap,” he said with a laugh.

On the emotional toll of some cases

“When people whose future quality of life is solely dependent on your work for them, it can become extremely burdensome at times,” McDonald said. “If you get the recovery they should have, they’re at least financially going to be secure. If you fail, they risk not having a home, not knowing where they’re going to live in the future, not knowing how they’re going to be able to provide for their families.”

But he said even when clients win multimillion-dollar judgments, there’s only so much healing. Clients have told him they would give those checks back if they could be the way they were the day before their injury or before the loss of a loved one.

On proudly not advertising

“Justice (Brent) Dickson used to tease me because we have a sign on the front of our building that says ‘non-advertising lawyers,’” McDonald said. He worries advertising increases the pressure to bring in more money perhaps at the expense of clients. He said studies have shown jurors are dubious of lawyers well-known as heavy advertisers.

Clients referred from other lawyers, clients, or a friend or family member who vouch for a lawyer’s reputation are likelier to have confidence in that attorney’s work, he continued. McDonald worries some firms that advertise heavily might not have the resources to work a case that on first glance might not be meritorious. He said pressure to settle cases as soon as possible may result in a client receiving less than a case is worth.

On the rules pertaining to attorney advertising

“I think the biggest problem is the enforcement … and particularly the unfairness,” he said. A common complaint he hears is that out-of-state attorneys are rarely disciplined for ads that appear to flagrantly disregard rules of professional conduct.

On aspects of the law that still stump him

McDonald said court holdings over time that people do not have a private cause of action when state agents fail to follow statutes seem to him contrary to the public policy lawmakers intended when the laws were enacted. He cited a case in which a child was molested and a state official who was aware failed to notify parents. The court held the parents could not sue because the state had immunity.

“In my opinion, you could really gain a lot of benefit by having everybody having a right to a private cause of action to enforce the statutes that affect them,” he said.

On challenges to judicial merit selection

A former member of the Indiana Judicial Qualifications Commission, McDonald played a role in selecting several current appellate jurists. He said Indiana’s merit-selection system works well, even though bills in the Statehouse regularly propose to change it.

“There’s always a concern or a fear that when something’s not broken, somebody still wants to fix it,” he said. “I intend to fight in opposition to those changes. … I think we have as good a system as you can get. If you make it direct election, you’re going to basically be turning it over to the money interests.”

On ITLA’s importance as an institution

Aside from speaking up in amicus briefs and providing a voice for the plaintiffs’ bar, McDonald said the organization plays a significant role in shaping the judiciary.

“I think it’s critically important for Indiana Trial Lawyers Association to be involved in trying to offer input about judicial candidates, whether they’re elected or appointed, to get judges who are well-qualified and impartial and not beholden to special interest groups of any kind,” he said.•