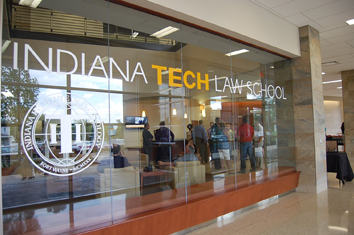 The official ruling from the American Bar Association may not have been unexpected, but it still landed a blow to Indiana Tech Law School.

Just four days after meeting with law school officials and hearing their presentation about their approach to legal education, the ABA Council of the Section of Legal Education and Admissions to the Bar denied granting provisional accreditation to the Fort Wayne school.

The memorandum from the council issued June 9 offered no public details or explanation as to why the school was turned down. The council followed the recommendation of the ABA’s accreditation committee to deny provisional approval.

Although the denial can be appealed, the Fort Wayne school is bypassing that option and focusing instead on the reapplication process. Dean Charles Cercone said with the support of the local bar and the university, he is very confident the law school will be accredited.

The law school is looking forward to showing “the ABA and everybody else what an outstanding program we have here,” he said.

Legal education experts say Indiana Tech is going to have to work hard on multiple fronts to overcome this setback. The denial of provisional accreditation is not a death blow, but the school will have to enrich its course offerings, maintain good financial health and show that its graduates can pass the bar exam.

All of that hinges on the law school being able to keep the students currently enrolled and recruit more to attend.

Concordia University School of Law in Idaho is an example of how much of an impact a hiccup can have. When the ABA delayed provisional accreditation to do more research on the new law school, 55 third- and second-year students transferred to the University of Idaho College of Law while another 20 third-year students took a leave of absence.

That school was granted provisional accreditation earlier this month. Eleven members of the inaugural class that entered in 2012 were set to graduate this month and nine are expected to sit for the bar. Indiana Tech will build on the application and self-study it completed for this first attempt at accreditation, Cercone said, and it will incorporate the feedback from the council and strengthen its effort with the goal of getting provisional approval by the time the first class graduates in 2016.

The university is committing more resources for the law school “to receive accreditation and to have a truly distinctive program of legal education,” Cercone said. “We’re proceeding full steam ahead with the accreditation process.”

According to Cercone, the ABA council wants to see the law school better develop its curriculum and provide more academic support to its students. The school has touted its hands-on approach to legal education and, the dean said, has no plans to change direction.

“Actually we’re reaffirming and reemphasizing what we believe is the innovative aspect of our curriculum and redoubling our efforts in that area and devoting more resources to it,” Cercone said. “I don’t think they (the council members) had a problem with the nature of our curriculum. I think they want to see it more fully developed.”

Indiana Tech Law School’s curriculum is likely not a problem since the ABA in general is pushing for schools to teach more practical skills to its students, said Paul Caron, professor at Pepperdine University School of Law and writer of the popular TaxProf Blog, which covers a range of legal topics including education. Still, adding to the course offerings and improving academic support cost money, which puts the young institution in a tough place.

The challenge for the law school, Caron said, will be to attract students to pay tuition as well as to bolster the curriculum. A “critical mass” of students along with more faculty will be necessary for the school to have a rich course catalog.

Cercone said he is advising the students to make the decision that is in their best interests. If they choose to transfer, he will do whatever he can to help facilitate that move.

“I have tried my best to keep every single student here at Indiana Tech,” Cercone said. “I hope most will do so.”

Students who do apply to another law school could find a more welcoming reception because of the economy and because schools are competing for bodies, Caron said. According to his blog, transfers are increasing, in part, because U.S. News & World Report rankings do not take into account transfer students, so institutions can boost their enrollment without damaging their standing.

Depending on their academic records, Indiana Tech students who elect to transfer could find a spot in another law school, Caron said.

The manual for getting accredited after receiving a denial has been written by Lincoln Memorial University Duncan School of Law, according to Benjamin Barton, professor at the University of Tennessee Knoxville College of Law and author of the recently published “Glass Half Full: the Decline and Rebirth of the Legal Profession.” After being rejected for provisional accreditation in 2011, the Knoxville law school sued the ABA but then changed course, dropping the lawsuit and reapplying for accreditation. It eventually was approved in December 2014.

Key to the school’s success was hiring a new dean who had a proven track record of getting institutions through the accreditation process, Barton said.

Cercone is the second dean of Indiana Tech Law School. Founding dean, Peter Alexander, left unexpectedly in May 2014 just as the accreditation process was getting underway. André douglas pond cummings, as interim dean, oversaw the finishing of the school’s self-evaluation and ABA site visit in September.

As he began his tenure on Jan. 5, 2015, Cercone was praised as having the skills and experience to lead the law school.

New law schools also have to contend with the downturn in the legal market. Barton sees Indiana Tech’s denial as part of an overall tightening by the ABA in light of declining enrollment across the country and slumping job numbers.

Given the upheaval in the legal profession, Barton believes the ABA will have to make “ugly decisions” in the coming five to 10 years and take accreditation away from some established law schools. Institutions with low bar passage rates and financial troubles might become targets for losing accreditation.

“I basically think that it’s good,” Barton said of the ABA’s tightening of approvals.

Concerns over whether Indiana Tech students will be able to pass the bar might be behind the ABA’s request to see the law school offer more in terms of academic counseling, bar preparation and career guidance, Caron said. Indiana Tech’s inaugural class had a median GPA of 2.85 and an LSAT score of 148, according to law school, which indicates these students are at risk for not passing the bar.

Barton speculated the ABA wants to see if the law school hangs in and continues to do the work the ABA wants. If the school enrolls quality students and shows a good bar-passage-rate record, it should be able to get full accreditation, he said.•