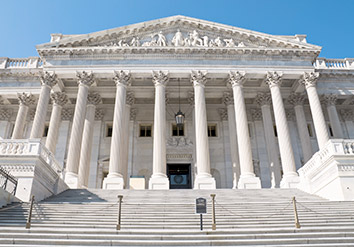 Evansville Police Sgt. Karen Vaughn-Kajmowicz and her wife, Tammy, battled the Indiana General Assembly’s effort to add the “one-man, one-woman” definition of marriage to the state constitution and eventually joined one of the lawsuits against the state to end the ban on same-sex marriage.

Yet, even with the success of stopping the marriage amendment and convincing the federal courts that Indiana’s prohibition was unconstitutional, Vaughn-Kajmowicz worries the debate over gay or lesbian couples marrying may not be settled. Looming is the decision expected soon from the Supreme Court of the United States in the same-sex marriage case, Obergefell v. Hodges, 14-556.

“I think that we both feel really confident that the Supreme Court will make the right decision, but if that were not to happen, obviously things are going to be questioned and thrown back into limbo,” Vaughn-Kajmowicz said.

How the nine justices will ultimately rule and what the fallout will be from that decision is a question many are asking. The amicus curiae briefs filed with the Supreme Court from myriad supporters and opponents of same-sex marriage highlight different potential ramifications from the ruling.

Tammy Vaughn-Kajmowicz shared the concern the Supreme Court could erase the recognition as married that she and Karen now enjoy.

“We have hope and we feel secure, but we also feel like we’re sort of dangling,” she said. “We don’t have it yet, there’s still the possibility something could change for us and we may have a lot more fighting to do.”

Underscoring the work gay and lesbian couples feel they still have to do to gain acceptance and equality, James Obergefell, the lead plaintiff in the Supreme Court case, visited Indianapolis June 5 and pledged he will continue to fight. His appearance was part of a countrywide tour by the Human Rights Campaign, a national lesbian, gay, bisexual and transgender civil rights organization.

The Vaughn-Kajmowiczes and their three children made the trip to the Statehouse to hear Obergefell speak and to talk about their experience before a small crowd of supporters. After a press conference, Obergefell and Karen Vaughn-Kajmowicz wrapped their arms around each other and embraced. Then they gathered family members and smiled for photographs.

The Supreme Court agreed to take up same-sex marriage only after Circuit courts split on the issue. Up until the 6th Circuit Court of Appeals ruled in favor of the state marriage bans in Michigan, Ohio, Kentucky and Tennessee, a handful of other courts, including the 7th Circuit, had ruled that prohibitions on same-sex marriage violated the equal protection and due process clauses of the U.S. Constitution.

Obergefell sued his home state of Ohio when it did not recognize his marriage to his longtime partner John Arthur. The couple was finally married in 2013 after more than 20 years together, but a short time later Arthur died of amyotrophic lateral sclerosis, commonly referred to as Lou Gehrig’s disease.

The U.S. District Court for the Southern District of Ohio ruled in favor of Obergefell, and the state appealed to the 6th Circuit. Similar cases from the other states in the Circuit were added to the court’s docket. Three months after oral arguments, a divided panel found the ban on same-sex marriage does not violate the Constitution.

In Obergefell v. Hodges, the Supreme Court has divided the issue into two questions – whether states are required by the Constitution to allow same-sex marriage, and whether states can ban gays or lesbians from getting married but still be required to recognize such marriages that legally occur elsewhere.

Indianapolis attorney Karen Celestino-Horseman speculated if the justices wanted “to play Solomon and split the baby down the middle,” they could decide states have to recognize legally married same-sex couples but do not have to marry same-sex couples.

“I won’t be surprised that the ultimate conclusion will be same-sex marriages are to be recognized but there could be nine different opinions,” Celestino-Horseman said. “I think we will be spending a lot of time afterward trying to figure out what those opinions are saying.”

Celestino-Horseman was part of the legal team that represented first responders in the same-sex marriage lawsuit, Lee v. Pence, filed against Indiana in March 2014. Karen and Tammy Vaughn-Kajmowicz were among the plaintiffs in that suit.

In its brief in support of the petitioners, Indiana University echoed the fears expressed by the Vaughn-Kajmowicz family. The university raised the specter that if the Supreme Court rules against same-sex marriage, Indiana’s law prohibiting the marriage of gays or lesbians and banning the recognition of such unions could be resurrected.

Moreover, the university said Indiana could insert a ban on same-sex marriage into the state constitution.

University of Notre Dame professors joined different briefs opposing the petitioners. They reiterated many states’ argument that legalizing same-sex marriage will harm children by depriving them of the stability provided by a family consisting of a mother and a father.

These amicus curiae asserted that children raised by their two biological parents are less likely to commit crimes, have multiple abortions, abuse illegal drugs, suffer from mental illness or do poorly in school. Forcing states to redefine marriage, the signers contend, will undermine social norms that are important to children.

Notre Dame Law School Professor John Finnis joined a brief from 47 scholars. This group also raised the states’ right argument, maintaining that requiring states to recognize same-sex marriage would deprive citizens of their right to set family policy for themselves.

Speaking at the Statehouse, Obergefell said a victory at the Supreme Court does not mean the fight for equality has ended.

“I promise to keep up the fight for the LGBT community until full equality is truly a reality,” Obergefell said. “I promise to work with HRC and our community for a full, inclusive, comprehensive LGBT non-discrimination bill. Until that day comes, we are leaving far too many people behind.”•