Home » Women are leading the way in law firms 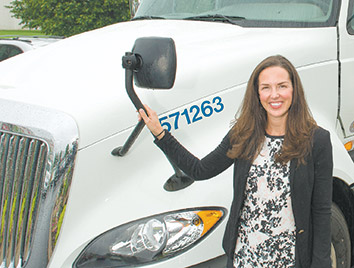 According to a 2014 study by the American Bar Association, about one of every three individuals in legal practice is a woman. When it comes to partners at private law firms, that fraction drops to one of every five. On the bench, women now make up almost 24 percent of federal judges and 27 percent of state court judges.

While these numbers may seem low, they’re on the rise— showing significant strides for female leaders in the legal profession.

“Female lawyers are just as successful as male lawyers, there’s no difference there,” Melissa Proffitt, managing partner for the Indianapolis office of Ice Miller LLP, said. “Judges and clients don’t see any different qualities in that regard.”

Proffitt co-chairs Ice Miller’s energy and utility team – a traditionally male-dominated practice area – with fellow female partner, Kay Pashos. Pashos and Proffitt have known each other since high school and teamed up three to four years ago. But Proffitt said she has always felt that the firm recognized the importance of equal opportunity.

“The firm has been wonderful for women,” Proffitt said. “Our founding partner, Harry Ice, was a huge proponent of equal treatment. We really never had a diversity initiative because it was always part of our culture. People were always viewed on merit.”

The emergence of women in firm management has been enhanced by a willingness among lawyers and the industry to talk about issues and obstacles. In 2014 Faegre Baker Daniels LLP was named to “50 Best Law Firms for Women” by Working Mother magazine. Amie Peele Carter, a partner and intellectual property and sports lawyer at the firm, sees continual improvement being made.

“I would say in the last 20 or so years there’s been a real focus on creating opportunities for women to advance in the workplace,” Carter said. “In my view and experience, though, if you are thoughtful, smart and willing to work hard, opportunities continue to open up, regardless of gender. A lot of people, perhaps the majority of women, tend to opt for more flexible work arrangements because of family or other obligations. Some do that to pursue another part of their career. It isn’t just a question for women, but all of us. What do we want to get out of life?”

For females who want to adjust their work schedules for family or other reasons, Carter suggests exploring all the alternative options that might be available. She believes there are still plenty of opportunities for these women to make partner.

“There are more ways to be a lawyer today in private practice than there ever have been,” Carter said. “Don’t assume that just because you want to be a mother there’s no way you can be a CEO.”

According to a 2015 Pew Research Center study, about one of every 20 CEOs is a female across all career fields. Top positions such as these appear to be inclining for women at a slower rate, but the good news is they are growing. Just 20 years ago there were no female CEOs of Fortune 500 companies. Today, there are 26.

Although strides for women in the workplace are evident, the American Bar Association found that in 2013, female lawyers were making less than 80 percent of male lawyers’ weekly salaries. That number has increased by 5.5 percent since 2004, but there is still room for it to climb.

“I think additional opportunities need to be provided for women in leadership roles,” Proffitt said. “I think our clients in the industry are mandating it. We are graduating at greater numbers than men, we’re growing businesses faster than men, and to not show that equality in any organization makes no sense.”

In order to encourage other aspiring female lawyers to continue pursuing an interest in law, Lesley Pfleging, a partner practicing transportation law at Lewis Wagner LLP, says it’s important to make them feel welcome and to provide them with an honest rundown of what the job entails.

Carter also places importance on helping to pave the way for future female lawyers. She advises “being willing to mentor, be a resource and connect them with others.” But Carter says the most important thing to do is to lead by example.

“There’s nothing like an actual role model in terms of being able to inspire younger generations to look past what a person might think of an industry,” Carter said.

Pfleging, whose primary practice is representing commercial carriers and commercial drivers in catastrophic injury and wrongful death cases, believes the practice of law is more open to women now than it ever was. She foresees the female presence getting bigger and better with each coming year — not only in the field of law, but also in the practice of transportation.

Although Pfleging sometimes finds that she’s the minority at work events, she’s beginning to see an increase in female attendees. More male-dominant practice areas and industries, such as transportation, are encouraging women to become involved. And Pfleging is one of the women helping to lead the way.

“There’s always an internal expectation that you want to make sure you can show a client that you’re equally qualified and will go the extra mile,” Pfleging said. It can be an uphill battle breaking into an industry that has set standards, but I think that it (the law field) being a male-dominant industry will go away. Maybe we won’t even be talking about this in the future.”•