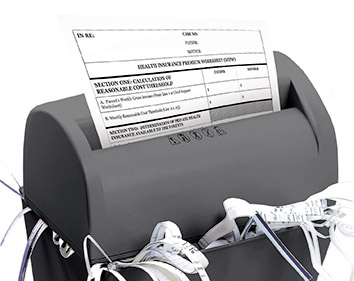 The passage and implementation of the federal Affordable Care Act is underlying a proposal to rid Indiana’s child support guidelines of a loophole and complicated health insurance worksheet.

As part of its periodic review of the support guidelines, the Domestic Relations Committee of the Indiana Judicial Conference is recommending the language regarding health care and medical support be revised to reflect the expanded availability of public health insurance. Once the committee finishes its work, the Indiana Supreme Court will determine if the revisions should be adopted.

Family law attorneys welcomed the proposed change, saying the committee is keeping the focus on the children and making sure they have medical coverage. This revision provides some clarity and may reduce the instances of divorced couples returning to court to settle disputes over who pays for their children’s health insurance.

Drew Soshnick, partner and member of the family law group at Faegre Baker Daniels, said in terms of the mechanics, the proposed revisions to the health insurance guidelines are not substantial but, in terms of a message to the parents, the changes are very substantial.

The health insurance revisions are included with several other changes and tweaks to the state’s guidelines. Overall, the proposed adjustments are meant to bring the child support rules in line with caselaw as well as federal and state law. In addition to medical coverage, the revisions reflect change to Indiana’s emancipation age and clarify education and extracurricular activity expenses.

“I like a lot of what they’ve done here,” Brian Zoeller, chair of Cohen & Malad’s family law practice, said of the committee’s proposed revisions. “Overall, I was very pleased with the changes. They clearly thought through the many issues.”

Leo Tolstoy observed that unhappy families are all unhappy in their own way, but when their unhappiness leads to a divorce, the knotty issue of who pays for what can spark continued arguments and disputes.

Indiana’s child support guidelines have brought consistency to the process of determining the type and amount of financial backing the noncustodial parent must provide, attorneys say. Prior to the guidelines being adopted in 1987, orders for child support could vary from county to county and judge to judge.

Federal law mandates states review their child support rules every four years. The last set of revisions to Indiana’s guidelines was adopted by the Indiana Supreme Court in 2010. Work on the most recent proposals began in early 2014 by the 14-member Domestic Relations Committee under the leadership of Howard Circuit Judge Lynn Murray.

In addition, the committee hired University of Notre Dame associate professor of public policy and economics David Betson as a consultant. His work includes extensive research on the cost of raising children.

When the review started early last year, and again when the work came close to completion, the committee solicited comments from the public about the guidelines and the possible changes. Along with attorneys and judges who have offered reaction, many laypeople have used the public forums to voice frustration over their own particular cases.

“It’s not possible for us to write guidelines or commentary that addresses every single issue that may come up,” Murray said. “But we tried to address issues that come up that are common.”

Who is responsible for the child’s health insurance is a common area of contention.

In the 2010 revisions, the health care guidelines were rewritten with the acknowledgment that medical coverage can take a big bite from a paycheck. Specifically, the 2010 change removed the obligation for private health insurance, in some cases, if the cost exceeded 5 percent of the parent’s gross weekly income. To help determine if the cost was reasonable, the updated guidelines included the newly crafted health insurance worksheet.

Zoeller said the idea of the worksheet was good, in theory, but it did not work in practice. Judges and attorneys tried to use the form when it was first introduced, but it proved to be so complicated and confusing that many eventually abandoned it.

The proposed medical support revision to the guidelines removes the 5 percent threshold and does away with the worksheet. Under the proposal, if both parents are exempt from the federal mandate to have health insurance, then the court shall order the parent who has custody to enroll the minor in a public insurance program, like Medicaid or the Children’s Health Insurance Program.

Although a majority of the cases handled by the Indianapolis Legal Aid Society are family law, the society’s general counsel John Floreancig does not anticipate the changes to health care will have much impact on the clients. Most true legal aid clients already qualify and are enrolled in public health insurance, so the potential revision will not matter much, he said.

Still, Floreancig applauded the committee’s work in tackling the issue. “I think they’ve done a pretty good job of trying to clarify the quagmire of health insurance,” he said.

Another proposed change to the guidelines reflects the decision by the Legislature to lower Indiana’s age of emancipation from 21 years old to 19 years old.

In particular, the revisions hold that noncustodial parents with child support orders for two or more children cannot automatically reduce the dollar amount when one of the those youths becomes emancipated. Instead, the parents should return to court and ask for a modification order.

The potential change, Soshnick said, will encourage more people to consider the circumstances and follow a more formal process when trying to reduce their child support obligations.

The changes note that with the new emancipation age, custodial parents will have to act sooner to get help paying for college from a former spouse. The petition for post-secondary educational expenses must now be filed with the court before the child turns 19.

The 2012 change to Indiana’s emancipation statute was significant and had a huge impact, Zoeller said. Now, the guideline revisions highlight the small window available to file the petition, and if the deadline is missed, the custodial parent and the child could have to shoulder the costs of college by themselves.

The proposed revised guidelines are currently available to the public and the committee is again accepting comments about the proposals, as well as suggestions for additional change. So far, the proposals have elicited more than 400 comments, according to Murray.

On Aug. 21, the committee is scheduled to meet for several hours to review the responses and make the final adjustments. Murray expects the group will further tweak the guidelines but will not make major overhauls.

The committee plans to finish its work and present the final draft of the guidelines to the Indiana Supreme Court in the fall.

“I think they will be helpful,” Soshnick said of the proposed revisions. “I think (the revisions) start to get at some areas of high conflict and disputes.”•