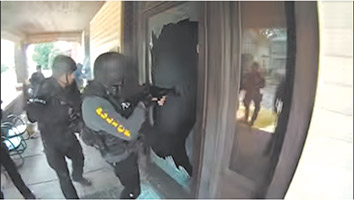 A violent, destructive and ultimately misguided SWAT team search of an Evansville home captured on helmet-cam video was “disturbing” and “cannot have helped race relations in Evansville,” a federal appeals court said July 31.

The 7th Circuit Court of Appeals found Evansville police “committed too many mistakes to pass the test of reasonableness,” and are not shielded from a federal excessive-force lawsuit for the raid on Louise Milan’s home. The 68-year-old shared the home with her two daughters, and video of the raid that began with flash-bang grenades hurled through smashed windows has become a political flashpoint in the city.

The 7th Circuit also concluded the EPD’s execution of the raid on skimpy evidence resulted from “a failure of responsible police practice.”

In a statement, Evansville Mayor Lloyd Winnecke stood behind his police chief, Billy Bolin, and minimized the 7th Circuit opinion. Winnecke said of the more than 18,000 arrests city police made from 2012 to 2014, Evansville has only three pending civil rights suits from that period.

“Of course, these positive results start with Chief Bolin’s leadership and are a direct reflection of the tireless work and dedication of each and every EPD member,” Winnecke said in the statement. “… I want to commend the women and men of the EPD. They have a tough job to do, they do it well and they do it in a lawful manner.

“While others want to ‘try’ this case to the media or politicize this mere procedural decision, we must take the prudent course and refrain from comment,” Winnecke said in the statement. A spokesman for Winnecke said he had seen the video but would not comment on it.

Biesecker said the case is proceeding toward a status conference on Sept. 1, at which time a trial date may be set. “Up to this point in the case, the defendants have refused to make any offer and discuss settlement,” he said.

Evansville attorney Robert Burkart, who represents the city in Milan’s suit, did not respond to a message seeking comment.

“Police decided to search the Milan house — and in a violent manner,” Posner wrote for the panel in Louise Milan v. Billy Bolin, in his individual capacity as Evansville Police Department Chief, et al.,  15-1207.

During the course of the search, police handcuffed Milan and her 18-year-old daughter; Milan’s other daughter was not home at the time of the search. All of this was captured on an officer’s helmet-cam video, and scenes from the search were shown on local TV news.

“The members of the team are seen on the tapes impressively clad in body armor and big helmets and carrying formidable rifles pointed forward. It would take a brave criminal to try to fight it out with them, and of course there was no criminal in the house and little reason to expect one to be there,” Posner wrote.

“The handcuffing of the daughter, looking indeed much younger than her 18 years, is shown on the helmet video along with the rest of the search, and she is so small, frail, utterly harmless looking, and completely unresisting that the sight of her being led away in handcuffs is disturbing. All that the SWAT officer had to do was take her by the hand and lead her out of the house, which was rapidly filling with smoke from the flash bangs; there was no conceivable reason to handcuff her.”

“From what we can observe on the videos, all the members of the SWAT team were white, Mrs. Milan and her daughter black; the broadcasting of the videotape cannot have helped race relations in Evansville,” Posner wrote.

The opinion affirmed denial of summary judgment for the police, upholding a ruling by Judge William T. Lawrence of the U.S. District Court for the Southern District of Indiana, Evansville Division.

Milan’s home was searched a day after authorities became aware of threats made against police through an unsecured Wi-Fi network in Milan’s home.

Before the search of Milan’s home, which yielded no sign of criminal activity or male suspects, police had observed Derrick Murray sitting on a porch a few doors down. Murray previously had been convicted of intimidation for threatening police, and he ultimately pleaded guilty to posting the threats in the instant case.

After police searched Milan’s home, “It took them only a day to discover that it was indeed (Murray),” Posner wrote. “The police neglect of Murray is almost incomprehensible. His past made him a prime suspect. A day of investigating him would have nailed him, as we know because a day of investigating — the day after the violent search of the home — did nail him…”

EXTRA
See the video: Watch the helmet cam video from the Evansville SWAT team search at the center of this case.

“It took them only a day to discover that it was indeed he who was responsible — he had used Mrs. Milan’s open network to threaten the police. But rather than give him the SWAT-team treatment, the police politely requested that he come to police headquarters, which he did, where he was arrested without incident. … The police department’s kid-gloves treatment of Murray is in startling contrast to their flash-bang assault on Mrs. Milan’s home,” the panel noted.

“The district judge’s denial of the defendants’ motion for summary judgment appears eminently reasonable when one puts together the flash bangs, the skimpy basis for the search and its prematurity — the failure to check whether the (WiFi) network was open and the failure to conduct a more extensive investigation before deciding that flash bangs were appropriate means of initiating the search. … The failure to discover that the network was Mrs. Milan’s was a failure of responsible police practice,” Posner wrote.

The panel also cited its previous Estate of Escobedo decision that cautioned against the use of flash-bang devices, which can be lethal if a person is directly struck by one. In this case, the police defendants’ argument that they are shielded by qualified immunity falls short, the panel held.

“The police in this case flunked the test just quoted. True, they’d brought a fire extinguisher with them — but, as if in tribute to Mack Sennett’s Keystone Kops, they left it in their armored SWAT vehicle,” the judge concluded.

In an unrelated development after the 7th Circuit ruling, Evansville police arrested Murray on Aug. 4. He is one of three people charged with murder in the July shooting death of Shane Breedlove, a popular Evansville singer, musician, nightclub performer and DJ.

For Murray, 34, the murder charge was at least his 14th adult state court misdemeanor or felony prosecution, according to Vanderburgh County court records.•