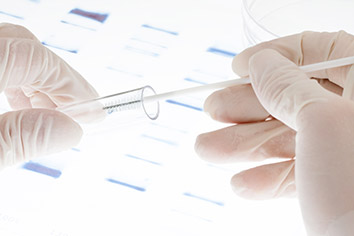 Indiana Sen. Tim Lanane is not convinced that swabbing the inside of someone’s cheek is the same as collecting fingerprints or taking a mug shot.

“There’s something about DNA that’s a little ‘New World-ish’ to me,” the Anderson Democrat said.

Lanane and his colleagues in the Indiana Statehouse are once again wrestling with when to collect genetic material from individuals in the criminal justice system. During the 2015 session of the Indiana General Assembly, Rep. B. Patrick Bauer, D-South Bend, introduced a bill calling for DNA to be taken from anyone arrested for a felony.

Indiana law currently allows for DNA to be collected from individuals convicted of a crime, and the DNA is kept in a database. Bauer’s bill did not get a hearing, but the Legislature assigned the topic to the Interim Study Committee on Corrections and Criminal Code.

The committee, of which Lanane is a member, examined the issue at its first meeting Aug. 18.

Lanane said he needs to learn more about the value of obtaining the DNA samples and who has access to the database, but he harbors concerns over how far the collecting could go. While Bauer’s measure only targeted felony arrests, Lanane wondered if the collection would someday be expanded to include misdemeanors.

“Only when I’m convinced there’s a value in getting and retaining these samples that exceeds the slight … intrusion into a person’s liberty, would I be comfortable in supporting it,” he said.

This is not the first time the Legislature has considered expanding DNA collection and testing. Four DNA-related bills were introduced in the 2013 session and five were considered during the 2014 session.

The General Assembly’s fresh look at DNA collection comes after the Supreme Court of the United States allowed the expansion of testing to individuals who were arrested. In Maryland v. King, 569 U.S. ___ (2013), a split court concluded that taking a cheek swab of the arrestee’s DNA is similar to taking the individual’s fingerprints and photograph. The majority of five justices described DNA sampling as a legitimate police booking procedure that is reasonable under the Fourth Amendment.

Before the committee, Bauer said sampling arrestees would put rapists and murders in jail and possibly exonerate the wrongly convicted. He then turned to Jayann Sepich, a strong supporter of DNA collection, to advocate for his proposal.

Sepich, a resident of New Mexico, told committee members the heart-wrenching story about the brutal rape and murder of her daughter, Katie. From the crime scene, police did recover DNA evidence, but they did not find the murderer for more than three years.

Sepich linked the delay to New Mexico police then not being allowed to take a DNA sample until individuals were convicted. If the killer had been swabbed when he was arrested for an unrelated offense three months after Katie’s death, the police would have been able to identify him as the perpetrator.

Since then, Sepich and her husband have founded the nonprofit “DNA Saves” and have gone around the country pushing state legislatures to enact laws that enable samples to be collected when people are arrested. Twenty-eight states now require DNA collection for felony arrests.

Before the committee, she spoke in absolutes. She said DNA is “powerful and accurate” — it not only solves crimes but prevents crimes. Also, she maintained the DNA samples taken and kept in the national database, CODIS, include only 13 markers needed to confirm the identity and do not contain genetic health information.

“DNA is truly the fingerprint of the 21st century,” Sepich told the committee.

After Sepich finished her presentation, committee chair Sen. R. Michael Young, R-Indianapolis, asked why the group should not consider collecting DNA from each person at birth.

Sepich replied that she was not advocating for blanket sampling, but she would not oppose it.

Washburne, vice chair of the committee, noted he and the other legislators all took an oath to uphold the federal and state constitutions which include provisions defending privacy. In addition, he said constituents have talked to him about their worries over government’s increasing effort to collect data such as the National Security Agency gathering information from cell phone calls.

“I think a lot of people have been wrongfully arrested in their lives and they would be shocked to find out that wrong arrest somehow gives the government the right to take their DNA under this proposed legislation,” Washburne said.

Still, Young echoed concerns about potential arrests. He said that if law enforcement suspects that a person may have committed a particular crime, they might make an arrest for something else just so they can collect the DNA.

“We’re all interested in the truth,” he said. “That’s what this does; it gets us closer to the truth.”

The committee did not make any recommendations during the meeting. It plans to continue to study the topic and then decide how to advise the Legislature.

Following the meeting, Rep. Christina Hale, D-Indianapolis, talked about the balance between the value of collecting the samples and the concerns about privacy. She said that today the criminal justice system is not keeping Hoosiers safe.

Citing statistics that one in six Indiana girls had been raped or assaulted by the time she reached high school, Hale said she is interested in anything that can protect children and give police the right tools so Indiana can be as safe as possible.

Yet, like Lanane, she has questions about collecting DNA. She wants to know more about who takes the swabs, where the samples go and how they are processed. Also, she shares the concerns about violating an individual’s right to privacy.

“This is new and emerging technology, and it is something that our forefathers hadn’t anticipated,” Hale said. “Let’s take our time, let’s think this though, let’s make sure that we get it right. But at the end of the day, our goal is the same — to make sure that we protect every member in our society from violent criminal acts.”•