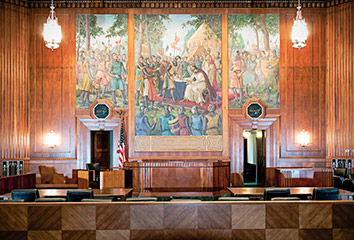 A who’s who of Indiana lawyers and state and federal court judges will soon mark eight centuries since Britain’s King John relented in the face of a baron rebellion and placed his seal on the document that guaranteed, among other things, right to a trial by jury.

That signature event at Runnymede outside London in 1215 is credited as one of the earliest cornerstones in the foundation of the rule of law. But the event also has special significance for lawyers and judges who’ve practiced at the former federal courthouse in Terre Haute. Dominating the art deco courtroom is a 1935 New Deal triptych by Hoosier-born artist Frederick Webb Ross depicting the event.

It’s a fitting backdrop for Indiana bench and bar leaders meeting next month for a symposium on the Magna Carta 800 years after its signing. Those who register for the free event will qualify to receive three hours of continuing legal education credit.

“It’s incredible to think about the concepts embedded in the Magna Carta being authored back then,” Baker said. “More importantly, from my perspective, that document was used as inspiration for our founding fathers and people drafting the Constitution in our country.”

Indiana Chief Justice Loretta Rush will be a featured speaker at the event, as will ISBA president Jeff Hawkins and Terre Haute Bar president-elect Noah Gambill. Former Justice Frank Sullivan, who traveled to England in June with an ABA group to learn more about the Magna Carta, will share that experience.

Sullivan was among about 1,000 ABA members who joined more than 3,000 people attending events commemorating the 800th anniversary. British Prime Minister David Cameron was joined by several members of the royal family and American dignitaries, including U.S. Attorney General Loretta Lynch.

“It was very interesting to actually visit the site at Runnymede and get a physical sense of where the momentous events of 1215 transpired,” Sullivan said. He also learned more about how the Magna Carta had differing influence on the British and American systems of government and law.

Sullivan said he was impressed by the remarks of Princess Anne during the rededication of an ABA Magna Carta memorial at the meadow where the document was signed. He said she noted that barons completely had the upper hand and could have deposed the king, but they instead chose to get from him a firm set of commitments concerning how government would function in the future.

“They were more interested in the long term than in immediate results,” he said. “That’s sort of a nice lesson to lawyers, in particular.”

Historians argue about the document’s importance, because it was presented by wealthy barons who were bordering on revolt against the crown. But Baker and others say it’s important for lawyers to appreciate the document and its significance in the work they do today.

“The issues they were upset about aren’t a lot different than the issues people are upset about today,” Baker said. Taxation and dishonesty and abuse of government power were some of the chief concerns in 1215. “It seems to me the issues are not dissimilar.”

Court historian and outreach coordinator Doria Lynch noted the inscription on the triptych reads, “Through this document government exists according to law, not power.”

“That it’s still there today even as the building passed from the federal government to Indiana State University speaks loudly” about the Magna Carta’s influence, she said.

Lynch will discuss the triptych and the history of the old federal courthouse, and ISU history professor Steven Stofferahn will separate myth from truth about the Magna Carta.

Baker said along with celebrating an anniversary notable in the legal profession, the event serves a second purpose. “We’re using this important anniversary as an opportunity to bring together some of the most influential personalities of the Southern District to Terre Haute, which doesn’t typically have these people in the same room.” 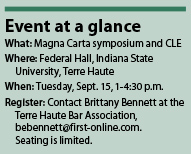 Terre Haute attorney and part-time Southern District Magistrate Craig M. McKee also will be among the event speakers. Working in the former federal courtroom where the Magna Carta looms large, he said the image remains evocative.

“This is what strikes me, is that the artwork in the courtroom depicts circumstances of impatience, intrigue against the king, and the human desire to have some capacity to conduct your own business as a citizen and not a subject of the crown,” McKee said. “It’s a human expression of the yearning to be away from the direct, and in that context, unfair authority of the crown unchecked.

“Jury verdict by peer, I think, is the most enduring aspect of the Magna Carta,” he said.

The Magna Carta had a short life as a guiding document, because Britain fell into civil war shortly after it was signed. But it was reissued several times and worked its way into British law, where its principles resonated.

“The Magna Carta was the first true symbol of the idea that the government is accountable to the people,” Baker said. “I think it’s important that everybody remembers that, and lawyers should be stalwarts of that.”•