Weeks after the American Bar Association approved a set of recommendations to address law student debt and educational experience, legal educators in Indiana described the recommendations as thoughtful but not necessarily different from what they are doing.

The ABA House of Delegates adopted the recommendations offered by the Task Force on the Financing of Legal Education during the 2015 Annual Meeting in Chicago. Now, the ABA Council of the Section of Legal Education and Admission to the Bar, the accrediting agency, is being encouraged to turn the recommendations into mandates for law schools to follow.

Led by former ABA president Dennis Archer, the task force was appointed in May 2014 and charged with examining the cost of legal education, student debt and law school finances. Convening a special group solely to review the money issues was advocated by the Task Force on the Future of Legal Education, led by retired Indiana Chief Justice Randall Shepard.

Deans of Indiana law schools do not see anything new in the recommendations or the report from the task force. They said they are currently providing students help with financial planning and changing the curriculum to make the students more practice ready.

Changes within law schools seem to be driven less by reports and more by the competitive job market and demands of students. Deans are seeing fewer people drifting into law school because they do not know what else to do. Among the students who are applying, many are considering the price tag very carefully and taking steps to mitigate their debt.

Law school deans said they have responded by bolstering the debt counseling services, looking for ways to cut costs, easing the burden on students by offering scholarships and, as Indiana University Maurer School of Law recently announced, freezing tuition.

While negativity about legal education and job prospects still exists, some see the tone of the narrative moderating. While the economy continues to recover and people may begin to feel more comfortable about pursuing a graduate or professional education, IU Maurer Dean Austen Parrish said legal educators still need to innovate.

“I don’t think if you sit and do nothing people will come back,” Parrish said. “On the other hand, I reject the notion that the system is broken and law school is not worth it.”

The report draws attention to the rising tuition and student debt load.

Indiana deans acknowledged law school is expensive, but they also highlighted the benefits of investing in a legal education. They cited studies showing attorneys realize higher earnings and, on the whole, lawyers feel satisfied with their careers regardless of what they are earning.

“The cost of education is a concern, but we need to think about the value of a legal education when talking about costs,” said Andrew Klein, dean of Indiana University Robert H. McKinney School of Law.

Still, the challenge for deans is to keep costs down while providing a quality legal education. At IU McKinney, Klein noted revenues are being used to recruit and retain quality faculty, run the law school clinics, staff the debt counseling and career services offices, plus offer the part-time evening program.

“If resources were unlimited, we’d try to do even more than we currently do to support our students,” Klein said, adding he is proud of the program at his school and the education provided to students.

Mandates from the ABA can also add to a school’s expenses. Notre Dame Law School Dean Nell Jessup Newton pointed to the push for outcome assessments to objectively measure how much law students are learning. Implementing such a program would require hiring more staff and possibly engaging a consultant.

The report highlighted some law schools that are experimenting with curriculum and developing new programs to meet the challenges of the marketplace. These new directions include tinkering with the third-year curriculum and providing more hands-on learning.

“I think a lot of innovation is already happening, not frankly because of some grand monumental reason but because of what schools have to do to attract students,” Parrish said.

While there have been many calls for changing legal education, Parrish noted law schools have to balance the doctrinal study that teaches students the critical thinking and analytical skills with the skills-based training that comes in the practice clinics and through externships. Dynamic changes can increase the number of applicants and bring some prominence, but it has to be a quality idea done well rather than innovation for innovation’s sake.

Valparaiso Law School has been attracting interest in its revamped curriculum. For first-year students, the traditional semester has been broken into “mini-mesters” in order to give students performance feedback sooner, explained Dean Andrea Lyon. Mixed into this, the 1L students are getting experience doing live client interviews.

Law students are used to being at or near the top of the class, so when they receive a lower grade, they can be shocked. Giving them results after a few weeks can help them make adjustments before the end of the semester. Lyon also noted the change has increased class participation substantially. 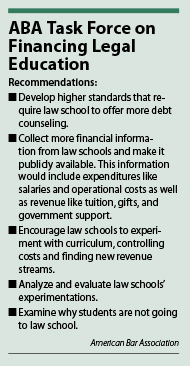 Valparaiso is going through the reaccreditation process and, according to the dean, the interim report was very enthusiastic about the new curriculum. In particular, the accreditation team said other schools might someday copy the “Valpo model.”

Notre Dame illustrates the balance that Parrish talked about. The South Bend law school now offers semester programs mixing externships with classes in London, Washington, D.C., and Chicago, and it is providing distance learning opportunities as well as continuing to focus on public service.

Yet, it is one of the few law schools in the country that still teaches jurisprudence. Two years ago, the faculty engaged in a robust debate about whether to drop the class, but a majority advocated for its retention. The professors maintained the course is necessary because it teaches students the philosophy of the law which gives them the ability to tackle deeper legal questions.

Innovation does not have to be a new way versus the old way. Thinking freely, Lyon mused about developing a program that would help solve a stubborn problem. Her idea would enable law school graduates to work off their loans by practicing in rural communities. Small town residents often struggle to find legal assistance near their home. Such a program would meet that need, she said.•