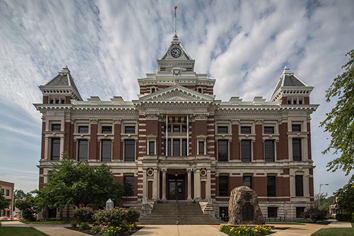 People who’ve been arrested in Johnson County are taking the unusual step of filing a class-action lawsuit against the county, judges and public defenders there, claiming they have not been represented by an underfunded and overburdened public defender system.

Plaintiffs and attorneys filing the case announced the lawsuit Thursday afternoon on the courthouse steps in Franklin. The suit will be filed in Marion Superior Court and names Johnson County Commissioners, four Circuit and Superior court judges, and seven Johnson County attorneys who serve as part-time contract public defenders.

“The current public defender system employed in Johnson County does not meet the basic standards of quality indigent criminal defense that have been required for over 150 years by the Indiana Supreme Court,” the suit alleges. Plaintiffs also have moved for an injunction against the current system.

“The problems are systemic. … Public defenders are paid part-time, and not bad either – about $50,000 to $70,000” annually throughout much of the state, he said. “They get paid that whether they do anything at all.”

But because public defenders in much of Indiana also retain their private practices, he said, some who contract with counties to represent indigent defendants put their more lucrative private practices first. As a result, the suit claims indigent clients receive inadequate representation and are sometimes pressured to take plea deals even when they proclaim their innocence.

The suit also alleges public defenders in Johnson County are not adequately funded to meet state or American Bar Association caseload standards. As a result, the part-time defenders may be juggling several hundred cases at any time, Sutherlin said – a far greater number than standards adopted by the Indiana Public Defender Commission.

The lawsuit presents a novel theory that public defenders and courts have breached their contracts by failing to provide adequate representation to indigent defendants as required by the landmark 1963 U.S. Supreme Court ruling Gideon v. Wainwright.

Sutherlin said the Johnson County defendants’ problems with their public defenders vary. Some say they never spoke with their appointed counsel. Others complain they professed their innocence but their defender did no discovery beyond reading police reports and talking to prosecutors. Some say their requests for speedy trial were ignored.

“Constantly in the background is, the public defender says (to defendants) ‘The prosecutor offered you a plea deal, you ought to take it,’” Sutherlin said.

That’s the circumstance alleged by lead plaintiff Kenneth Alford, who has been jailed since January on Level 4 child molestation charges. Alford proclaims his innocence but says he’s been pressured to plead guilty.

When Alford appeared for a court hearing on Sept. 30, his second defender told him he didn’t know Alford was scheduled for that date, the suit claims. When Alford expressed dissatisfaction with the defender’s failure to prepare a defense, the defender moved to withdraw. No defender has since entered an appearance for Alford.

Other plaintiffs allege they first spoke with their defenders at initial hearings and were pressured to accept plea deals.

“It is the hope (of plaintiffs) that they will find a remedy that will reform the Johnson County public defense system,” attorneys said in a press release announcing the suit. “It is also the hope of the individual inmates that this lawsuit will spark interest in the larger question of public defender services throughout the entire state, and that, like other states (including neighboring Kentucky), the State of Indiana will adopt a statewide approach that is not reliant on county funding.”