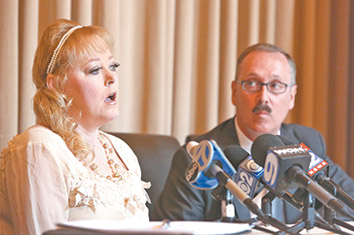 Nearly 300 people have accused a prolific Munster heart doctor of malpractice for implanting pacemakers or defibrillators they didn’t need and routinely scheduling unnecessary procedures, among other allegations.

The sweeping claims against Dr. Arvind Gandhi and other practitioners at Cardiology Associates of Northwest Indiana could take years to unwind, and they may change the calculus that sets surcharges physicians pay to the Indiana Patient’s Compensation Fund. That fund covers malpractice claims beyond practitioners’ insurance limit of $250,000, up to the statutory cap of $1.25 million.

The first verdict came Dec. 8, when a Lake Superior Court jury ruled against Gandhi, awarding Shannon Greer $450,000. Her late husband, Ken Greer, died after the doctor treated him for an infected pacemaker.

Two more malpractice cases have cleared medical review panels, each with findings of malpractice, and those cases are scheduled for trial early next year. Another roughly 170 cases naming Gandhi, and in some cases his associates, have been submitted to medical review panels. Many cases also name Community Hospital of Munster as a defendant.

“We believe we have ample evidence to show Community Hospital was acting in concert with the doctors, and that the hospital was putting profits ahead of patient safety by allowing doctors to do things they were not qualified to do,” said attorney Barry Rooth of the Merrillville firm Theodoros & Rooth P.C. His firm, Cohen & Malad P.C. in Indianapolis, and the Law Office of Paul Rossi LLC in Lowell represent plaintiffs, who lawyers say now number more than 290.

Lawyers for Gandhi, who retired last year, and the hospital deny the malpractice allegations or that Community improperly permitted doctors to perform procedures. Attorneys at Eichhorn & Eichhorn LLP in Hammond represent Gandhi’s insurer and declined to comment on the Greer verdict or whether it would be appealed.

Gandhi has been under investigation since at least 2008, when a former nurse and doctor at Community filed a whistleblower suit alleging unnecessary implants of pacemakers and defibrillators, violations of the False Claims Act, and Medicare fraud. Community said the federal investigation concluded with a settlement and no findings against the hospital.

Rooth, though, said plaintiffs’ medical records show doctors in the practice routinely performed unneeded procedures, sometimes scheduling patients for invasive procedures such as angiograms every six months. In one case, he said a patient was given 21 scheduled angiograms over a period of years. “There is no such thing as a routine angiogram,” Rooth said.

Because of the nature of the cases, he said many contain 15 or more instances of alleged malpractice.

Kirk Pinkerton, an attorney with Hinshaw & Culbertson LLP in Schererville, represents Gandhi. “His position consistently has been whatever procedures he performed were medically necessary and justified and with a view to improving the patient’s health and quality of life,” Pinkerton said.

“In the cases we’ve reviewed, the medical necessity for the procedure was warranted, and I think it’s a lot of people trying to get on the bandwagon who think they can get some easy money, which it’s not going to be,” he said.

But Cohen & Malad attorney David Cutshaw said the records show it was Gandhi who appeared to be putting money first. “Going through all these records just makes you angry he’s doing this to people,” Cutshaw said. The cost of some unnecessarily implanted devices compares with the price of new cars, he said, and patients were wrongly exposed to risk, pain and injury from procedures doctors ordered without cause or against professional guidelines.

“The expense, the inconvenience, and having a device in your body you don’t need, obviously that’s a reminder every day,” he said. “There are all kinds of conditions we’re seeing and looking at as we’re going through these cases.” He noted there’s developing evidence to show cardiac rhythm therapy devices implanted unnecessarily may worsen heart conditions or cause heart failure.

Cutshaw said a doctor who reviewed 12 defibrillators implanted by Gandhi found seven of the procedures were unnecessary. “The doctors up there reported him through proper channels to the hospital, and nothing happened,” he said.

Forszt disputes that. “The plaintiff attorneys continue to allege that the hospital somehow knew that Dr. Gandhi performed medically unnecessary procedures and allowed him to do so. This is simply not true.”

The cases, dating as far back as to 2004, are unique, she said, and each will require independent medical review. She also noted that in the two pending cases in which medical review boards found malpractice, the panels found the hospital did not breach the standard of care.

Cutshaw said attorneys reported their discovery findings regarding Gandhi’s practice to the Indiana Attorney General’s Office, which he said referred the matter to Medicaid fraud investigators. Spokesman Bryan Corbin said the AG’s office could not confirm whether providers are under investigation, but there currently are no Medicaid fraud cases involving Gandhi.

The plaintiff firms in these cases previously represented patients of another Lake County doctor who was accused of hundreds of acts of malpractice, former “nose doctor” Mark Weinberger. Following a federal sentence on 22 counts of health care fraud, Weinberger is living in Florida on supervised probation. Attorneys won a $55 million settlement against Weinberger’s insurers on behalf of 282 malpractice clients.

Tina Korty, general counsel for the Indiana Department of Insurance, said it’s too soon to forecast the Patient’s Compensation Fund’s eventual liability due to Gandhi-related cases. But an expected result is higher future surcharges on health care professionals.

Korty said as a result of past multiple claims the PCF paid on behalf of single providers or entities, actuaries contracted by the state are adding multiple-claim events as a factor used to set rates various practitioners pay.

In addition to potential claims from Gandhi, the fund has dealt with claims resulting from Weinberger’s cases, and in the 1990s, those linked to Orville Lynn Majors. The former Vermillion County Hospital nurse was convicted of murdering six patients under his care and is serving a 360-year sentence in Indiana State Prison.

“It seems the potential is there for these to continue to pop up with the Patient’s Compensation Fund,” Korty said of multiple-claim events. While the PCF has yet to pay any claims connected with the Gandhi cases, it will pay $200,000 of the Greer judgment if that verdict is finalized.

“We’re probably a couple of years from getting a real idea what the medical review panels think about these cases,” Korty said. “It’s so early, a lot of the details are just not there yet.”

She noted it typically takes about five to seven years for a medical malpractice judgment to be rendered from the time a notice of complaint is filed.•