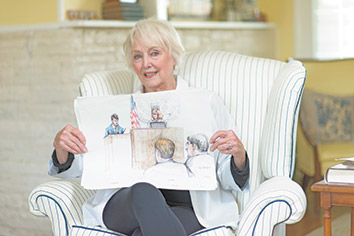 Place a pen and piece of paper in front of Tina Hansford and she’ll immediately start drawing whatever she can see.

The Indianapolis artist filled up her school notebooks with sketches of her classmates as a young student and plied her craft of portraiture at county fairs, learning to stay focused amid distractions such as dogs yelping at her feet. She continued sketching as she studied art at Indiana University and the Herron School of Art and, perhaps unintentionally, ended up honing the skills — speed and ability to capture a person’s likeness – that are vital to drawing the actions and emotions of a court proceeding.

Since 1980, when Hansford traveled to Winamac for the landmark Ford Pinto trial, she has worked as a courtroom artist. Using pen and colored pencils, she creates the illustrations that show the public what the attorneys, defendants and judges look like and what they did that day in court.

Courtroom artists, like Hansford, have provided the images that go along with some of the most famous events in legal history. When judges prohibit cameras and video equipment at trials and hearings, television stations and newspapers turn to artists to provide the visuals.

Although the drawings are created for the ordinary purpose of illustrating a news story, some of the works have found their way into art galleries. The Library of Congress announced in February the acquisition of 96 courtroom sketches for the Thomas V. Girardi collection of courtroom illustrations. The collection includes drawings from the proceedings of Bernard Madoff, Charles Manson and O.J. Simpson.

However, courtroom art is becoming a victim of budget cuts. Media outlets are saving money by assigning a photographer to take a picture as the defendant enters or leaves the courthouse rather than hiring an artist to draw what happens inside.

Even so, when the drama becomes a public sensation, courtroom artists will get the calls. Hansford was called by a local TV station to sketch the November 2015 sentencing of former Subway pitchman Jared Fogle, who pleaded guilty to various sex crimes.

Also working that day was Liana Buszka, an Indianapolis illustrator, who was sketching her first trial.

“I didn’t know that I would find this as interesting as I do,” Buszka said of drawing a court proceeding.

For the Fogle sentencing, Buszka used pastel sticks to illustrate the defendant, his attorneys and the judge. The crayon-like instruments worked well but their soft, powdery composition made them too messy. By the time she went to Fort Wayne to draw portions of the trial of Richmond Hill defendant Bob Leonard, charged with murder and other crimes from an Indianapolis house explosion, Buszka had switched to using a brush pen and watercolor pencils.

Buszka’s two-tool approach to courtroom drawing is common. Artists who use this method quickly outline the subject with the pen then go back and fill in the pigment. All the while, they sometimes get into a juggling act with having to put one picture aside to make another sketch, later retrieving the previous drawing to add the color. Switching around the pictures and grabbing the different color pencils can create some noise, so they have to be as quiet as possible or they may attract unwanted attention from the bailiff.

Key to getting a great drawing is getting a good seat. Hansford tries to get a chair in the front row of the gallery and, if the courtroom is full and other artists are jockeying for position, she will not get up even to use the restroom during a recess. A bad seat will offer a dismal view of the backs of heads.

Going into court, Hansford often has little idea what to expect. She said she just draws what comes in front of her, but she has seen memorable moments in state history. Hansford sketched the Mike Tyson rape trial in 1992, and the trial of Brett Kimberlin, dubbed the Speedway bomber for a series of bombings in that community in 1978.

Buszka tries to illustrate a moment, a point in the hearing where the parties are interacting and the emotions may be reflected on their faces. One such instance came when alleged accomplice Monserrate Shirley testified during the Leonard trial. Buszka said she was sitting at just the right angle to clearly see Shirley on the witness stand and catch the side of Leonard’s face, seeing his expression.

Courtroom artists have to work quickly because the television stations want the drawings as soon as the proceeding adjourns. On top of this, the artists have to accurately depict what the defendant looks like so the viewers will easily recognize him or her.

Doug Daniel drew a recognizable Jared Fogle sans glasses  seated next to his attorney during
his sentencing for various sex crimes. (Sketch courtesy of Doug Daniel)

Portraitist Doug Daniel noted the obstacle to crafting Fogle’s likeness when the sandwich spokesman appeared at his sentencing without his glasses. The public knew him as wearing spectacles, but before his hearing he had laser eye surgery, so the courtroom artists had the additional challenge of drawing a recognizable Fogle without his ever-present glasses.

To craft a likeness, Daniel looks for the physical characteristic that is most prominent. Whether it’s the nose or the shape of the eyebrows or the bags under the eyes, he focuses on that when drawing the person’s face.

Like other courtroom artists, he finds the trials interesting but he concedes the work is exhausting.

“It’s very difficult to do,” Daniel said of courtroom drawing, noting unlike painting a portrait, the defendants and attorneys in a trial “don’t hold still for you.”•