With figures that say between 500,000 and 1 million Hoosiers play daily fantasy sports, state legislators decided now was the time to regulate the growing industry before it got too big.

State Sen. Jon Ford, R-Terre Haute, co-authored Senate Enrolled Act 339, which regulates daily fantasy sports in Indiana. After some negotiations in both the House of Representatives and Senate, the bill awaits Gov. Mike Pence’s signature as of IL deadline. But deciding to regulate an activity some still consider gambling was not an easy task, especially because this is a relatively new industry where only a few states have passed such legislation. 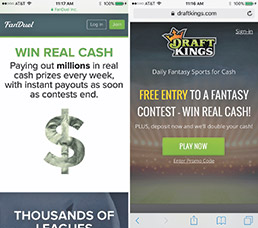 In Indiana, there are a few details to still work out as the state moves forward regarding regulations.

The bill only encompasses professional sports, as the NCAA would not allow betting on collegiate sports. Also, daily fantasy sports are not being advertised in high schools or at high school events.

Bill sponsor Rep. Alan Morrison, R- Terre Haute, said he’d spoken with several of his constituents who wanted the legislation and made it a priority in this session to pass a bill.

Doug Brown, a partner at Bose McKinney and Evans and managing principal of Bose Public Affairs Group, said Indiana has a history of becoming comfortable with gambling, first through horse racing, then riverboat casinos. He spoke at a symposium on the bill held at Indiana University Robert H. McKinney School of Law March 10. Thus, he said, it makes sense Hoosiers would be at the front of this legislation as well.

But is playing daily fantasy sports gambling? That was the question that dominated a lot of statehouse debate, Ford and Morrison said, with legislators concluding it is not. Kate Lowenhar-Fisher, a gaming attorney with Dickinson Wright in Nevada who also spoke at the symposium, said it shouldn’t matter.

“It’s defined by statute and falls into existing laws, so the debate over whether or not it’s gambling shouldn’t make a difference,” Lowenhar-Fisher said.

But it did, if only for the name, Morrison said. He said some studies have shown truly succeeding at daily fantasy sports is about 85 percent skill and 15 percent luck. Participants have programs and formulas figured out, pages and pages of stat sheets that show them when to play a certain player and who to play him against and which players to draft, so participants mostly choose their own destiny.

But even after determining fantasy sports was a game of skill and is not considered gambling, there were more details to figure out. Morrison said he and Ford wanted SB 339 to mostly be a “consumer protections bill” that will players from scams and put some regulations on a currently unregulated industry in the state.

Debates on how winnings for players should be taxed have yet to be fully settled, with a committee set to meet this summer and report its findings to the statehouse by November. Morrison said with Indiana embracing daily fantasy sports, he and Ford sent a letter to DraftKings encouraging them to move to Indiana where regulations are more lax than their home state of New York, one of the states currently suing the company. They said that would be another way for Indiana to get more in tax money from the industry.

The bill did decide those who owe child support would have the winnings they make in fantasy sports garnished to pay what they owe, though there is still some debate about how to find players. They can self-report on most apps, but honesty only goes so far. Other modes of finding those people are in the works.

Also, companies wanting to get into the daily fantasy sports business in Indiana would have to pay a one-time fee of $50,000, as well as a $5,000 annual fee. Morrison said he didn’t like that high of a fee.

“I think with a fee that high we’re excluding a lot of small companies that may want to get into this,” Morrison said. “But it’s one of those concessions that had to be made in order to pass this bill.”

There have also been controls put in place to stop “gaming the system.” A player can only participate in 25 games at a time, and any more than that would be a $1,000 penalty per entry. There are other controls the gaming commission is looking at as well.

And while the paid fantasy sports industry is growing, it could be changing again soon. Lowenhar-Fisher and I. Nelson Rose, a professor at Whittier Law School who also spoke at the IU McKinney symposium, agreed that paid sports-betting could be legalized in next few years as legislators realize a 1992 federal law, the Professional and Amateur Sports Protection Act, is unconstitutional. Gambling is supposed to be legislated through the states, they said, and they think it won’t be long before this law is repealed.

“Whenever there is a new gambling option available, the old gambling option loses its interest by about a third,” Rose said. “Paid fantasy sports won’t be going away, but it could be changing if sports betting becomes legal.”

Brown said this bill could be “the gift that keeps on giving to gaming lawyers” going forward, depending on regulations and how many “horror stories” come up with consumers. But he did agree that legislators took the right step in trying to legislate now before the industry gets too big and becomes impossible to regulate.

“It’s become one of those things that’s so ubiquitous it can’t be outlawed, so we might as well figure out how to properly regulate it,” Brown said. “We might be headed that way with marijuana in a couple of years.”•