Home » Inside the Criminal Case: When your client is speaking to others 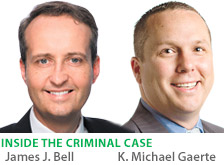 “Don’t talk to anyone but me. Understand?” the attorney said to his client at the end of their first meeting. The client nods and the attorney feels satisfied knowing that his advice has been heeded. Nine months later, during a jury trial, the attorney watches as exhibit stickers are placed on his client’s Facebook posts, letters and a CD which contains his client’s jail calls. All of the statements were made after the initial meeting.

“Say nothing.” This advice seems simple enough, but any attorney with a few years under his or her belt knows that the advice is often not heeded. The emotions of a case are often too much for a client to handle and that client’s statements can sometimes lead to adverse evidence.

In McElfresh, a defendant signed an agreement to plead guilty to molesting three children. Id. at 2. However, prior to the court’s acceptance of the plea, the defendant wrote a letter to a victim’s mother which noted the similarities in the victims’ statements and opined that “[t]hey were coached as [sic] what to say, and I know if anyone could find out the truth, it would be you!” Id. at 3. The defendant then stated that if he could have “gotten” the victims to admit their false statements they would have been charged with “False Informing.” Id. Based on this letter, the defendant was charged with and later convicted of, attempted obstruction of justice. Id. at 4.

The Court of Appeals held that the evidence was insufficient to convict the defendant of attempted obstruction of justice. The Court of Appeals reasoned that the defendant had simply told the victim’s mother that there were legal consequences for lying under oath and that this statement “is simply the truth. We cannot believe that in the State of Indiana it can constitute a crime to make a true statement even if the subject matter of the true statement involves the future testimony of a witness in a criminal proceeding.” McElfresh v. State, 40 N.E.2d 1259, 1262 (Ind. Ct. App. 2015) (vacated in part by McElfresh v. State, 32S01-1511-CR-00667 (Ind. 2016), 2016 WL 830921).

The Supreme Court of Indiana disagreed, finding that the above statement was “overly broad.” McElfresh, at 5. Giving a hypothetical where a defendant truthfully told a victim that testifying would be a “horrible experience,” the court stated that “it is possible for a true statement to be threatening or coercive under the obstruction of justice statute.” Id. The Supreme Court held that a “reasonable trier of fact could have concluded that [the defendant’s] intent in sending the letter was an attempt to influence the child into changing her prior allegations against him.” Id. at 2. The convictions were therefore affirmed.

In the civil context, it may not be unusual for parties and witnesses to interact. For example, in a family law proceeding, the parties have to interact on issues such as child care. However, McElfresh demonstrates that there is always a risk that any statement one participant in a proceeding makes to another can lead to differing interpretations – even by a group of judges. As criminal attorneys, we need to appreciate this risk.

Comment 4 to Rule 4.2 states “[p]arties to a matter may communicate with each other, and a lawyer is not prohibited from advising a client concerning a communication that the client is legally entitled to make.” However, this seems like dangerous territory. When the parties communicate and that leads to an adverse result for one of the parties, surely at least one attorney will investigate what happened. It will then be left up to the eye of the beholder as to who orchestrated the communication, whether it was ratified by the attorney and whether any statements could be considered attempts at obstruction of justice.

Attorneys can’t change the facts and often can’t change the law. When they are hired, their first goal should be to prevent the situation from getting worse. In order to reach the goal, attorneys routinely advise clients not to talk to anyone. As part of that advice, the attorney can cite the example from McElfresh that demonstrates that even truthful statements can be viewed as coercive and criminal. When an attorney has knowledge that a client seeks to communicate with a participant in the case, the attorney must proceed with caution. While the attorney can ethically advise the client regarding the communication, the safe advice will always be for the client to remain silent and to allow the attorney to handle the communication. If the client insists on making the communication, the attorney should take the time to document the advice he or she gave.•

James J. Bell and K. Michael Gaerte assist lawyers and judges with professional liability and legal ethics issues. They also practice in criminal defense and are regular speakers on criminal defense and ethics topics. Bell is an attorney with Paganelli Law Group; Gaerte is an attorney with Bingham Greenebaum Doll LLP. They can be reached at [email protected] or [email protected] The opinions expressed are those of the authors.