Garland, chief judge of the U.S. Court of Appeals for the District of Columbia Circuit, has been tapped by Obama to fill the vacancy created by the unexpected death of Justice Antonin Scalia.

“Judge Garland and I had a substantive conversation,” Donnelly said in a statement. “I had the chance to get to know him, ask him questions, and learn about his time on the D.C. Circuit, and views on the role of the Court. I was impressed with his deep knowledge of the law and his commitment to public service and our country.”

Donnelly, a graduate of the Notre Dame Law School, and Garland met at 10 a.m. in the Senator’s office. 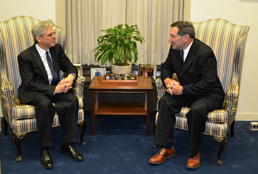 Initially Republicans refused to consider the nominee, saying the next president should choose the new justice. However, some in the majority have been softening their stance, according to a report by the New York Times. Already Sen. Mark Kirk, R-Illinois, and Sen. Patrick Toomey, R-Pennsylvania, have scheduled meetings with Garland.

Donnelly is among a number of Democrats who either have met or have scheduled meetings, including Sens. Bob Casey of Pennsylvania, Kristen Gillibrand of New York as well as Amy Klobuchar and Al Franken, both of Minnesota.

Donnelly pushed his Senate colleagues to give Garland a hearing and vote on his nomination.

“Part of my job as a Senator is to meet with and thoroughly consider judicial nominees,” Donnelly said. “I hope my Senate colleagues will do their jobs and meet with Judge Garland, ask him questions, learn about his record and his temperament, and then hold hearings and an up or down vote on his nomination.”