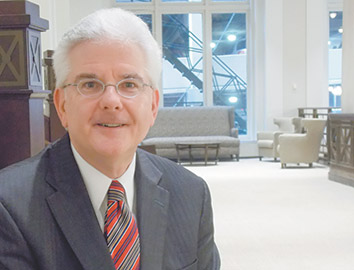 With programs that need funding to continue to grow, the Indiana Bar Foundation is revamping its donor options to encourage more attorneys and non-attorneys to contribute.

The foundation is launching the Keystone Society, a new designation for supporters who give annually, to bring in dollars which the organization can use to expand its civic education programs such as We the People and mock trial, as well as bolster its pro bono initiatives. Unlike many of the grants and funding the nonprofit currently receives, money from the society will not have any strings attached and will be able to be used as needed.

Charles Dunlap, executive director of the bar foundation, explained his organization wants to be among the options lawyers, judges and non-lawyers consider for their donation dollars. He acknowledged raising money is difficult but through the society, he hopes to increase donor recognition and donor stewardship.

Pointing to the educational programs in the schools and to the legal aid assistance the foundation supports across the state, Dunlap said, “These are the kinds of things that we’re hoping to be able to continue to expand with the support of Keystone Society members.”

To kick off the society, the foundation is getting help from a good friend. Timothy Abeska, partner at Barnes & Thornburg LLP in South Bend, is offering $25,000 to match the first $25,000 in donations. The foundation is hopeful that when the members of the legal community see one of their own making such a gift, they will be encouraged to follow suit.

Abeska expects the society will get enough contributions to use his entire gift.

“We are a group of professionals who are very fortunate to be in the position we’re in,” Abeska said. “We have an obligation to help those who are less fortunate and don’t have opportunities.”

Donald Lundberg, former president of the Indiana Bar Foundation, described Abeska’s donation as a “gift that is transformational.” It will help the foundation fulfill its mission, which encompasses both civic education and civil justice components. Lundberg said the mission is diverse “but they’re things that need to be supported. They’re important to making the system of justice meaningful.”

Along with the formation of the Keystone Society, the nonprofit is reworking its Fellows program. The foundation will still induct lawyers of distinction as a Fellows class each year but the size of the group will be smaller, possibly around 10 members.

Dunlap said that program — started in 1979 as a way to recognize outstanding attorneys and bring in funds — is not meeting the needs of the foundation as a philanthropic vehicle. With the Keystone Society, the nonprofit is suggesting donation levels, ranging from $500 to $10,000, to deepen its pool of unrestricted dollars.

Also, the foundation will be transforming its annual We the People awards dinner held in December to be a more general recognition event where the new class of Fellows as well as the members of the Keystone Society will be honored. In addition, Dunlap said the Randall T. Shepard Award, which honors attorneys who do pro bono work, will likely be presented at the dinner instead of during the Indiana State Bar Association’s annual meeting.

The start of the Keystone Society is coming on the heels of the second disbursement of Bank of America settlement money. As part of the multibillion-dollar fine the national bank paid to the U.S. Department of Justice for mortgage misdeeds that facilitated the Great Recession, some of the funds are being directed to Interest on Lawyer Trust Accounts across the country. The foundation received nearly $600,000 in the first found of payouts and will get $7.1 million as part of the second round.

However, Dunlap and Lundberg were quick to point out that the Bank of America money can only be used for programs covering mortgage foreclosures and community development.

Dunlap said unrestricted gifts give the foundation flexibility in supporting its diverse mission.

In particular, the We the People program, which offers a curriculum to elementary, middle and high school students about the U.S. Constitution, is growing and demanding more resources. About 40 new teachers, including 17 fifth-grade instructors from Carmel and 14 from high-risk schools, are introducing the program into their classrooms, which requires the foundation to provide teacher training, materials and connections with attorney coaches.

More students involved in We the People means the foundation also has to funnel more dollars into the competitions. The foundation needs to find bigger venues for the regional events and increase its budget for transporting students and providing them lunches on competition days.

“We try to make sure (the schools) don’t have a financial excuse not to do the program,” Dunlap said. “So we need Keystone Society to help grow the program.”

The donations to the Keystone Society also will be important in convincing the Indiana General Assembly to continue its support of We the People. When Congress stopped funding the program at the national level, the Legislature allocated $300,000 to cover the shortfall. The Statehouse viewed its participation as part of a public-private partnership and, Dunlap noted, the society will be a way to show the legal community is stepping up to support the program as well.

Abeska, a graduate of Notre Dame Law School, said he made the contribution because he believes all attorneys have an obligation to give back to the profession. He sees the foundation with its work in providing access to legal services and teaching school children about democracy as a “great vehicle” to fulfill that obligation.

“This was a no-brainer to make this gift,” he said.•