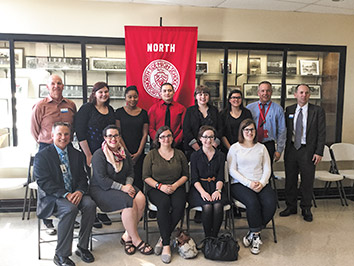 One Allen County school is getting the opportunity of a lifetime to participate in a national civics competition, and the Allen County legal community is making sure it will happen.

Fort Wayne North Side High School has been selected as the Warren Burger class for this year’s We the People: The Citizen and the Constitution Program. The Warren Burger class honors students from a high-need school who have also demonstrated a high level of academic achievement. The school must meet two of three criteria: having a large percentage of students who qualify for free or reduced lunch, a large minority population, or a large percentage of students who have low socio-economic status parents.

North Side met those criteria and was chosen from a pool of schools nationwide eligible for the honor. The school will compete in the national We the People Competition April 22-25 in Washington, D.C., and College Park, Maryland. The competition is a mock congressional hearing with six different units of study where students prepare answers to questions related to civic issues, then are tested on their reasoning skills and civic knowledge with questions from judges.

North Side is the first school from northeast Indiana to go to the national competition.

North Side teacher Matthew Mertes, who will be taking 11 students from the four government classes he teaches, said he was surprised and thrilled that the school won the national attention.

“It’s much more of an honor than I think is generally understood,” Mertes said. “It’s a big honor for us. I was as excited as I’ve been in my career when I found out.”

The Allen County legal community was excited as well, and has done quite a bit to make sure the team has the funds to go and is prepared when it gets there. The Allen County Bar Foundation took it upon itself to raise the money needed for the team to go, and lawyers from all over the area have volunteered their time to help tutor and mentor the students so they can be at their best for the competition.

“We couldn’t have done this without the support of the bar foundation,” Mertes said. “They are the most civic-minded group of people I’ve ever been around.”

Allen County Bar Foundation President Martin Seifert said when the foundation was notified of North Side’s honor, they called an emergency meeting and vowed to do everything possible to help the team. That involved not only raising money, but volunteering time as well.

“It’s been a fun project,” Seifert said. “The program is vitally important, and we’ve had lots of volunteers ready to step up in assisting the students. They have their own thoughts for the questions, but we’re here as a resource to help them get to the goal line.”

“They’ve done an enormous amount of work on our behalf,” Mertes said of the volunteer lawyers. “They’ve helped students fine-tune their responses.”•

The North Side group has received help outside of Allen County as well. Fishers High School, the We the People state competition champion, donated $1,000 to help the North Side team go.

Indiana Court of Appeals Judge Paul Mathias, who has been involved in the We the People Competition since its inception in 1987 and is from Allen County, said he is proud of the first students from northeast Indiana to go to the competition. He also will be heading up this week to help the students before they leave for Washington.

“This is a class of students who don’t always get the best opportunities, so I’m glad to see them take this and run with it,” he said.

He said he was also glad to see the Allen County Bar Foundation’s support of the class, though he wasn’t surprised. Indiana, he said, has a long history of doing well in We the People, with many top 10 and even top five finishes.

“It’s been a unifying and inspiring focus,” Mathias said. “It’s a strong statement of the importance of this program and I’m glad to see them unite for a common cause.”•