In his eight years in practice, Matthew Bruno has proven himself as a skilled litigator in civil defense, a zealous advocate for his clients and an emerging leader at his firm. He keeps close watch on evolving issues and developments that could impact the firm’s clients. Matt has shown an eagerness to shape the future of the firm, volunteering to work in the emerging practice areas of cybersecurity and data privacy. In 2015, he was recognized by the Defense Research Institute for his hard work and dedication, earning the first-ever Unsung Hero Award from DRI’s Young Lawyers Committee. 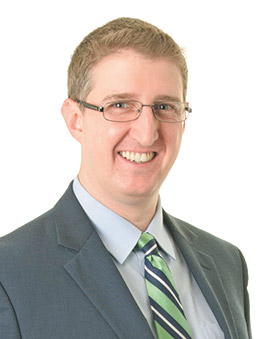 Are companies taking cybersecurity seriously, or do they need to do more?

While most breaches reported in the media deal with massive corporations, this is a critical issue for small businesses as well, in that businesses with fewer resources to dedicate to cybersecurity are attractive targets. In this realm perhaps more than any other, an ounce of prevention is worth a pound of cure. Top priorities for businesses should be taking an inventory of the data they store, where/how they store it, and why they store it, and bolstering their cybersecurity measures protecting this data to the extent feasible. If your data is more difficult to access than that of the business next door, your business and its data become less attractive targets. Like being chased by a bear, it pays to be more up to speed than the next guy. Companies should also be investing in preparation of incident response plans, such that when a data breach occurs, they will be prepared to minimize the data lost and their legal exposure.

Why is it important to be involved with bar associations?

The value of a strong network cannot be overstated, and bar associations are great avenues to develop one.

It would have to be my first job — selling Christmas trees at a place in Castleton called Smilin’ Babes Produce. It was one of the few customer service jobs out there where the vast majority of your customers are in great moods and happy to talk to you!

I tend to find a lot of truth in the saying that “you are the average of the five people you spend the most time with,” and I find that to be especially true in developing as an attorney. For the sake of brevity, I’ll keep it to three. From Dick Young, I learned that practicing law is not just a job, it can be and often is an incredibly fun thing to do. From Steve Springer, I eventually learned how to withstand and respond to his firestorm of questions about our cases, i.e. how to exhaustively identify and think through all of the issues, and how to negotiate like a seasoned veteran. And last, but far from least, I learned from Erin Clancy to get fired up about my cases and to never stop trying to effectuate change for the better in your practice and in your community.

I was captain of the Purdue men’s epee squad in college. As I was the shortest one of us at 6’3”, our tagline was “Victory from Above.”

What is one misconception people tend to have about what you do for a living?

To use my father-in-law’s terms, people think that I am always “defending Goliath.” While there is a level of truth to that, in that I generally defend businesses, people tend not to understand that I often work with individual employees who take the litigation very personally. Most people have no idea how much of a personal aspect there is to a defense litigation practice.

My practice is primarily centered around insurance defense, which has included cases dealing with intellectual property, trucking, aviation, product liability, premises liability, dram shop liability, defense of real estate professionals, and so on. Early on in my career, based on cases I had worked on up to that point, I began to say that my practice encompassed “everything from a guy falling out of his neighbor’s tree to a helicopter crash in the country of Turkey.” It is the variety, both in the areas of law I practice and in the people I encounter, that makes my insurance defense practice great.

I would be running with one or more of the multitude of business ideas running through my mind at any given moment.

I have always been more of a live in the moment, take each day as it comes kind of guy. Moreover, I have had some surprises over the last few years that have demonstrated to me over and over again that you never know what life is going to throw at you or how it will shape your future — but there will be a boat.

One of my first federal court hearings was before Judge Allen Sharp in the Northern District, on my client’s motion to dismiss a punitive damages claim in a wrongful death case. Despite it being my motion at issue, Judge Sharp had plaintiff’s counsel present his case for punitive damages and why he believed the question should be certified to the Indiana Supreme Court. Upon completion of plaintiff’s counsel’s well-presented argument, Judge Sharp stated that if he sent the question down to “his friends in Indianapolis,” he would expect a letter back to him saying “Judge, we thought you could read.” He then turned to me and asked if I had anything to say, and I told him I believed he had already covered everything. He approved, telling me that it’s good to know in your career “when you should just shut up.” It’s not that I would do anything differently, but I would love to be a fly on the wall and watch my younger self in that moment.

I believe it will look very much the same as it does today. Sure, there will be different tools, new technologies, and greater variety in billing arrangements, but lawyers will still be advocating for their clients day in and day out to achieve the best results possible.

One of the aspects I enjoy most is the conversations. Whether it’s spitballing ideas with another attorney in my office (or with my wife at the dinner table), strategically bantering with opposing counsel, or presenting an argument to a judge, I enjoy the intellectual challenges presented in virtually every conversation I have with another attorney. What I like the least is having to deal with attorneys who do not seem to understand that we are all in this together and refuse to comport themselves in a civil manner.