Over the last three decades, Fran Watson has been a tireless advocate for people of limited means who face criminal charges. She created and directs the Wrongful Conviction Clinic at the law school, where she supervises students who represent indigent clients seeking relief. She also has worked on cases for the Innocence Network. Equal Justice Works, a law student group, honored her last year during its annual Public Interest Recognition Dinner. Before joining the law school, Fran was the first chief public defender for the Marion County Public Defender Agency, which was created to unify county public defender services. Fran often presents on criminal justice issues to the bar, judiciary and others, and she serves on boards or committees with several groups, including the ACLU of Indiana and the Indiana State Bar Association Committee on Civil Rights of Children. 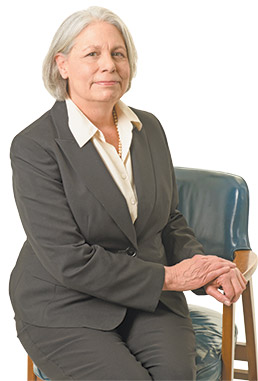 What do you enjoy the most about teaching?

I am a Clinical Professor of Law in a live-client Wrongful Conviction Clinic setting. I most enjoy connecting the students to the clients in the complexity of real-world litigation. Law students spend a lot of time doing case analysis, and, in my opinion, too often fail to understand that one litigates the facts, not the law. I most enjoy making that point, seeing the light bulb come on, and being part of a student’s transition into the first-time role of counsel.

Should Indiana’s public defender system be a state-run program instead of county by county?

Thanks to the Public Defender Council, many, many committed public defenders, and the Public Defender Commission, Indiana has advanced the delivery of public defender services in the last few decades. That said, major problems exist. In many counties, public defenders remain employees of the courts. A state-based system is worth exploring. After all, we have a state-based system at the post-conviction level, why not at the trial level? I believe resources would best benefit the pursuit of justice if delivery of defense services at the trial level was consistent across the state.

I was a social work and criminal justice undergraduate major. I wanted to make the world a better place, especially for children who do not have a hand in the cards they are dealt. Children need advocates. After a few months as a social worker, and interactions with the attorneys in my small hometown, I thought I could make a greater impact toward my goals as a lawyer.

I remember a survey I took in high school to gauge career interests. It was spot on for me. The results said I would make a good lawyer and a good conservation officer. I love animals, great and small, and would enjoy being outside protecting and enhancing the natural world.

Mistakes are good for growth. Wisdom comes with experience and, upon reflection, mistakes make for the best learning. Learn from mistakes, and spend less time beating yourself up.

My close friends certainly know I am a bit of a Luddite. For example, I won’t text.

When I began, there were no computers! If someone had suggested putting a typewriter on my desk in 1980, I would have objected. These days, I spend enormous amounts of time working at the keyboard. Technology has changed the practice of law. The law is more accessible, and that is definitely good.

Protecting and enhancing the lives of children.

I learn that people have common needs but quite distinct personalities. One size does not fit all when it comes to mentoring. To be a good mentor, it helps to be a good listener.

Ethics won’t change. The legal profession will remain client-based. But, technology will continue to dominate the changes in the practice.

I like winning, of course, which means I don’t like to lose. That said, I most like being a small piece of the rule of law. I like the empowerment that comes with knowing the law and knowing how to use it to fight for justice. What I really like least, in nutshell form, is the harmless error standard.

Is there a case that you’ve handled that stands out? Why?

Definitely the Lake County, Indiana, Darryl Pinkins and Roosevelt Glenn wrongful conviction cases that I accepted in 1999 from the Innocence Project. Pinkins and Glenn are innocent in my eyes, but not in the eyes of the law. I have lost count of the number of times I visited these men in prison to relay the repetitive news that the courts do not agree that a new trial is warranted despite the use of false science at trial. It “stands out” to try to explain the harmless error standard to the actually innocent. The Wrongful Conviction Clinic I direct remains in pursuit of justice for these men. Thankfully, the concept that the system may result in the imprisonment of innocent persons is gaining traction, and that understanding helps to advance available remedies.

Editor's note: The Lake County prosecutor moved to vacate Pinkins’ convictions on April 22, with the successor post-conviction hearing set for April 25.  "Instead of the hearing, Mr. Pinkins walked away from the jail a free man. I applaud and respect Bernard Carter’s decision.  As indicated in the State’s motion, the integrity of the conviction had been called into question by new science. I have reason to believe that a motion I plan to file for a similar result in Mr. Glenn’s case will succeed as well."