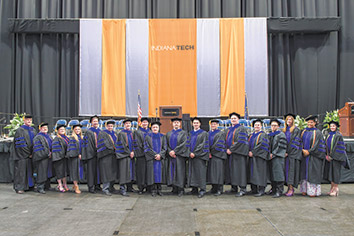 The 20 graduates who walked across the commencement stage May 14 and received their J.D. degrees were part of a historic day for Indiana Tech Law School as they were the first to graduate from the state’s fifth law school.

But faculty and graduates acknowledged that the graduation, while a significant milestone, is not the end of their work.

Coming from a school that still raises doubts, the members of the charter class know they have more pressure on them than most law school graduates. Their credibility and the reputation of the Fort Wayne school relies on the graduates passing the bar exam and becoming exemplary attorneys.

“They’ve got to go out and be great,” associate dean for admissions and student affairs andré douglas pond cummings said. “…They’ve got to be really smart about how they represent clients, how they are ethically, how they engage in interactions with other lawyers. They’ve got to be better than just good lawyers.”

Bar exam preparation courses were scheduled to begin just days after graduation and the class has set a goal to have a 100 percent passage rate. Despite the task ahead, the graduates took time to celebrate their commencement.

Before the morning ceremony at the Allen County War Memorial Coliseum began, members of the charter class assembled for a group photo in front of the graduation stage. 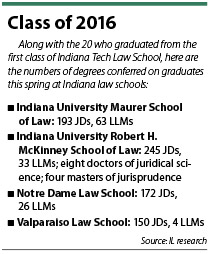 Afterward, many returned to the law school with their families for a reception. During the light lunch, cummings recounted the triumphs and adversities of the past three years and the class presented the school with a grandfather clock as a gift. Several graduates thanked their professors and some even shed a few tears, underscoring the particularly close bond between the charter class and the faculty.

Graduate Amy Thompson said the tight relationship bolstered the school’s curriculum that focuses on producing lawyers who are ready to practice. The law professors kept their office doors open so students could walk in anytime for help, and the classmates developed close friendships that trumped feelings of competitiveness and insecurity.

“Knowing that we were a small school, I did expect that we would probably build relationships,” she said. “Never did I expect to build them as closely as we have.” 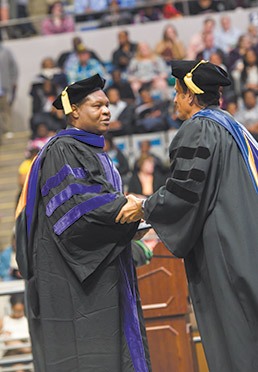 The next three years brought trials neither the charter class nor the faculty anticipated. Peter Alexander, the founding dean, departed suddenly without explanation, and the law school initially failed to get provisional accreditation from the American Bar Association. This threw the students’ futures in doubt because Indiana, along with many states, requires individuals who take the bar exam to have graduated from an accredited law school.

Then acting as interim dean, cummings went to each student individually and told them to explore their options. He believed the law school would gain ABA approval because the problems cited in the denial were fixable with just small improvements. Indiana Tech did gain provisional accreditation in March.

One class member, Shawn Good, did opt to leave, transferring to Concordia University School of Law in Boise, Idaho. He said he was confident Indiana Tech would get accredited but staying was too risky, so he made what he described as a “safety move.”

Good completed his third-year coursework at Concordia but then transferred his credits back to newly accredited Indiana Tech to graduate as a member of the charter class.

The law school welcomed Good back, but cummings has special affection for the students who stayed.

“My hat is off to them for having that kind of belief and fortunately we rewarded that kind of faith by doing everything in our power to show the ABA that we are the wave of the future. We are what law schools should look like,” he said.

Indiana Tech touts its curriculum as being heavily experientially based. As an example, cummings recalled the contracts classes he took in law school. He read about contracts and learned how they were breached but never drafted one. Indiana Tech students, by contrast, draft contracts, complaints and articles of incorporation in addition to practicing other skills like interviewing clients.

The curriculum was praised in a paper published in the April edition of the Wisconsin Law Review. Richard Redding, vice chancellor for graduate education at Chapman University, examines the offerings in law schools designed to provide the skills training so the students can immediately step into practice.

Indiana Attorney General Greg Zoeller, who attended the graduation reception, adjusted his syllabus when he taught an Indiana constitutional law class at Indiana Tech during the fall semester of 2015. Teaching at other law schools, he said, he was always encouraged to stick to the academic aspects of the subject, supplemented with stories from his own experience. But in Fort Wayne, he had the students draft amicus briefs and based the exam on a case from his office.

“I think they were every bit as good as any of the students I ever taught in constitutional law,” Zoeller said of his Indiana Tech class.

The curriculum attracted Charles Cercone who was appointed dean of Indiana Tech Law School in January 2015. Looking ahead, he said the faculty will have to follow the ABA’s suggestion from the accreditation process and improve the academic profile of the incoming classes. Already the school takes a holistic approach, looking at each applicant’s undergraduate grades, LSAT score, work experience and whether he or she overcame any significant disadvantages.

Next year the law school will have to say goodbye to its strongest supporter. Indiana Tech president Arthur Snyder has announced his plans to retire in 2017.

“If we can pass the bar at a higher rate than average, that will prove to the legal community and all the naysayers out there that we’re a viable institution and that we’ll be around for many years to come,” he said.

As the faculty and students become more active across the state and word gets out about the school, more attention will be focused on Fort Wayne.

“I think the energy the school is going to generate, it’s going to take a little while, but three to five years and Indiana Tech is going to be on par with the rest of the schools in the state,” Judge Felts said.

Once she gets through with the bar exam, Thompson plans to devote more energy to looking for a position in private practice, but if nothing materializes, she is prepared to create her own opportunity. She and a law school colleague have been exploring the possibility of working in the area of consumer protection and debtors’ rights. Other attorneys, she said, have already offered to mentor them.

Good has a desk waiting for him at his father’s law firm in the Chicago area. He will take the Illinois bar then join his dad in practicing in the areas of Social Security disability, family law and estate planning.

Zoeller, who has hired a number of Indiana Tech law students as clerks and interns in his office, said the charter class will be the best advertisement for the school.

“A student who’s bold enough to come when it was not accredited, who stayed the course when everyone else was challenging and criticizing and being skeptical, that’s the kind of bold attorney I like to hire in the office of the attorney general,” he said. “These students are the definition of bold.”•